You are here: Home / Book Review / Speech Begins after Death 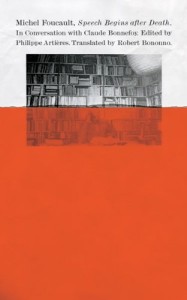 In this small, short, and entirely arresting book, the reader gets a brief yet curiously sustained peek into the daring and relentless thought processes of the philosopher Michel Foucault.

Here is a book that is titled after speech, yet discusses writing. And discusses is really the right word here, for it’s an interview, a “conversation” (conducted in 1968) between Foucault and Claude Bonnefoy. So the book takes place as a kind of transcript of speech, and throughout the conversation Bonnefoy pursues Foucault’s relationship to writing, and specifically how Foucault arrived at writing in the first place.

This pursuit becomes almost a game that doubles back on itself at every turn, and writing and speech take on the form of a weird chiasmus. Of course this might not sound all that strange in our after-theory moment (cf. Jacques Derrida et al.), but nevertheless there is something so sincere and striking about Foucault’s formulations and reflections, such as this one:

We write so that the life around us, alongside us, outside, far from the sheet of paper, this life that’s not very funny but tiresome and filled with worry, exposed to others, is absorbed in that small rectangle of paper before our eyes. (66)

This inner-subjective probing is simply gripping, and it’s also a pleasure to read.

Bonnefoy is adamant at the outset that he does not want Foucault to simply retread the thematic material or claims of his books (by that point, The History of Madness and The Birth of the Clinic). And while this goal is largely achieved, it is also fascinating to see how matters of madness, medicine, and surgery slip into the conversation and become metaphors for how Foucault takes up writing as a form of expression.

I began by suggesting that this book is really about thinking, which is finally what one sees on display on every page. For this reason, I plan to teach Speech Begins after Death in a future class, as it wonderfully captures and distills the patterns and ruptures of thought that characterize the best of what gets called critical theory, and it takes place right around that pivotal time when theory really started to migrate, settling and unsettling across a range of disciplines and academic departments.

But I hardly want to play up the “theory” aspects of this book; its appeal is so direct and plain as a general meditation on writing, on thinking about one’s own writing, and how such a meditation can be communicated. It’s a book about self-awareness, and the wide vistas and depthless tunnels that open up therein. But it’s also a book about speaking frankly, off the cuff, so that we get gems like, “I get the impression of velvet when I write” (38). This book belongs on the shelves of any reader with interests in Foucault, theory, or writing. It’s also a book that won’t stay on the shelves, because it is actually a delight to read, and read again.