You are here: Home / Book Review / A Questionable Shape 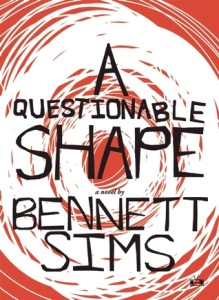 I don’t like zombies. It’s not that I’m afraid of them, I just think that their current popularity points to unsettling cultural fixations—which would be fine if any percentage of zombie fans recognized the ubiquity of zombie fandom for the liebestod that it is. I put zombies right up there with bacon and No Shave November.

So I wasn’t that excited when I found out that Bennett Sims’s first novel—which I’d been awaiting eagerly since his amazing story, “The Bookcase,” in Zoetrope a couple years ago—was dealing with such a default theme. But the thing I found most impressive was that, despite the pervasiveness of zombie writing, A Questionable Shape made me feel like nobody else had really thought zombies through until this book: what it would be like to pass into undeath, what it would be like to lose a loved one to undeath, and what prickly moral conundrums would arise after the threat had been mostly contained.

The primary force that moves the novel along is a zombie rule stated in the opening sentence: “What we know about the undead so far is this: they return to the familiar” (11). I was not sure whether or not this was a rule Sims invented or a classical rule of zombie lore, but a Google search for “zombies return to familiar places” pulled up other reviews of his book—so I think it’s original. Either way, it’s what sends the character Matt Mazoch on a daily circuit of his father’s favorite haunts after his father’s disappearance is supposed to be zombie induced.

Accompanying Matt is Michael Vermaelen, our narrator, who has a penchant for using words we’ve never heard of and comparing everything around him to what it would be like to be a zombie, such as the green glow of a speaker light, the killscreen in Goldeneye, anamorphosis in Holbein’s painting “The Ambassadors,” a limb falling asleep, footnotes…the more absurd and numerous the comparisons, the more unexpectedly delightful they become. Vermaelen’s Romantic bard narration is at its best when he turns his eye to the mundane things around him, like how stucco glows in sunlight brighter than other surfaces just like it’s easier to slather butter on toast than bread. He references a host of philosophical and literary texts, showing that whatever currently fascinates us about zombies is more of a deep-seated fondness for morbidity that perhaps is the closest thing to a zombie infection our species will experience. As in most other zombie stories, the animals are immune.

The novel is set in Baton Rouge, which carries with it the wake of post-Katrina trauma and its attendant logistical problems: the approach of hurricane season threatens to upset the zombie quarantine flotillas on the Mississippi, and thereby un-contain the containment. It was an intimate and trippy reading experience for me since I moved to Baton Rouge back in 2005, a week before Katrina hit. I was a northern transplant, so I trusted my neighbors when they told me “Oh, this happens every year.” The closest familiar faces were in northern Georgia, so I was forced to hunker down, filling my bathtub with water (I guess I need to clean my bathtub first, I remember thinking) and boarding up my windows. Wanting to freak myself out as much as possible on Katrina night, I flipped between Rosemary’s Baby, The Day After Tomorrow, and the Weather Channel as I clutched a bottle of wine like a buoy.

That spinning eye did approach like an infection ready to consume the land. And I did awaken the next day to a city devolved into a “Hieronymus Bosch pit”—the population doubled, the grocery shelves exhausted, the gas stations dry. Across the street from my apartment, displaced victims were spilling into and out of the Pete Maravich Assembly Center. I know I’m supposed to be reviewing a book here, but the resonance with my experience of living in Baton Rouge was uncanny. Because of my familiarity with “Red Stick” (that’s what they call the city sometimes), I also extra-understood Sims’s detailed descriptions of the neighborhood roads cupping the LSU Lakes like parentheses, as well as the spatial relationship between the Citiplace Theater and the Barnes and Noble. In other words, the novel maps a real urban geography as it tells its story.

Rather than being gruesome or plotty, A Questionable Shape ends up as a meditation on love—filial, romantic, even bromantic—as well as life and death, memory and deterioration. Sims goads his readers into examining the ways in which we’re all zombies—not in the yawning, hung-over, workaday, Shawn of the Dead way, but how we spend every moment of our lives in some kind of transition, whether it’s forgetting the book we just read, or growing up, or growing old, or being too worn out to pick up a phone and stay in touch with a loved one, or “the way a nightmare’s logic will [dissipate] midway through the morning’s piss, or a morning’s mist will mid-afternoon” (40).

“They say it’s all fantasy, zombies?” asks Aimee Bender derisively as she pries open the coffin at the end of her story “Among Us.” “It’s all made up goofiness? It’s all silliness we create for our own delightful fear?” Bender compares zombieness to such real-world items as fish farming, usury, the royal we, Being John Malkovich, and domestic dependency. Sims would like “Among Us,” but he goes a step grotesquer, portraying undeath as a type of siren’s song. In one of many dazzling digressions, Sims describes “the fundamental in-between-ness of the creatures”: “In any given dichotomy, they will constitute neither the positive nor the negative pole—neither living nor dead, neither psychopath nor psychopomp—but everything that circulates between them. That is why any ‘neither_____ nor _____’ construction, yoking together any two oppositional terms, will approximate the essence of undeath for me” (54). They are creatures who have shaken off firm identity, and Sims’s narrator is right to locate a modicum of peace in such a surrender.