You are here: Home / Book Review / A World of Objects 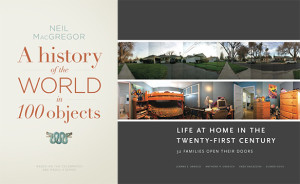 As I write this there are 114 visible artifacts on my desk. One hundred and fourteen things that either call my attention away from my work (a magazine renewal form, a car repair estimate, drawings from my three-year-old twins, a letter I need to reply to) or help me accomplish it (a mug full of pens, a bottle of ink, a tin of book darts, a cup of coffee now grown cold). One hundred and fourteen things when all I really need is my laptop. Or a pen, ink and paper. And the books I’m reviewing. And maybe a snack. And a scented candle…. And so the saturation begins.

I wouldn’t have thought of my stuff in these terms—visible artifacts, saturation—if I hadn’t seen Life at Home in the Twenty-First Century: 32 Families Open Their Doors on a bookstore table. This book, published by UCLA’s Cotsen Institute of Archeology Press in 2012, shows how people really live in the 21st century—not the immaculate spreads in Wallpaper or Dwell or IKEA catalogs, but the cluttered, chaotic lives of families whose stuff is not meticulously arranged, displayed or stored away.

The text is rather academic in tone, presenting a “visual ethnography” (3) that shows the way many of us live now: buried under “high densities of possessions” (11), stressed by “vanishing leisure” (68), dominated by televisions that function as a replacement hearth (“which until quite recently in human history exerted the most influence on the spatial distribution of social interactions and activities inside the home”) (120). The text is illuminating, as are the charts and floor plans, but it’s the pictures—full-color photographs on nearly every page—that truly show the way we live.

When I first saw the book I was staggered by the photographs in the second chapter: “Material Saturation: Mountains of Possessions.” The first is of a garage so packed with stuff (cardboard boxes, a filing cabinet, lawn chairs, basketballs, an infant car seat, a glass lamp) that at first I didn’t realize there were three children climbing among the piles. In another a dining room table decorated for Thanksgiving also holds a child’s homework, a PDA, a stick of gum and two cats. Couches overflow with stuffed animals, shoes spill out from racks, a shower stall barely contains a pile of dirty laundry, and a set of shelves in one child’s room holds 165 Beanie Babies as well as 36 figurines, 22 Barbie dolls and a mix of other dolls and toys. Looking at all this stuff left me visually exhausted, but a quick flip through the book revealed much, much more: chapters on “Food, Food, Food” (with images of second and even third refrigerators stockpiled with provisions from big box stores), “Vanishing Leisure” (with a discomfiting infographic that shows how much time we spend in only two rooms of the house), “Plugged In” (where it is confirmed that we are indeed addicted to electronics) and “My Space, Your Space, Our Space” (which considers how our homes become a three-dimensional image of self-expression). I was entranced. I immediately bought the book to add to my already packed bookshelves at home (95 feet of books over eleven bookshelves, exact number of artifacts unknown).

In the bookstore I had, I admit, been a little smug. I thought, “I don’t live like that.” But when I went home and actually looked I had to concede that we kind of do. I tried to defend myself: We have three-year-old twins—of course we’re going to have clutter! But their stuff was fairly well-managed. It was our stuff that was overflowing and encroaching: my books, his CDs, our clothes, our papers, and all the unclassifiable junk that feels impossible to get rid of. How had it come to this?

Alain de Botton, in his book The Architecture of Happiness, claims that we “depend on our surroundings obliquely to embody the moods and ideas we respect and then to remind us of them” (107). But if our surroundings are so jammed with stuff, what mood does that help us embody?  Satiation? What ideas do we want to be reminded of? Security, prosperity, luxury? Many of the families in Life at Home expressed not gratification with their possessions but stress and anxiety over them. It seems that once we have obtained an object our pleasure rapidly diminishes; the thrill of acquisition fades into malaise, annoyance and even outright depression as we struggle to close an overflowing drawer or stumble over teetering stacks of books and magazines. Our stuff seems to take on a life of its own, creeping like mold to cover our surfaces and cling to our consciousness.

We didn’t used to have so much stuff. In the chapter “Expectation” in his book Status Anxiety, de Botton shows how the rise of consumerism followed hot on the heels of the Industrial Revolution: “Goods and services that had formerly been the exclusive preserve of the elite were made available to the masses. Luxuries became decencies, and decencies necessities” (15). It has become so easy to consume, and new longings are created with each new advertisement, each new shopping mall, each new line of clothing (or cars or electronics or cosmetics). But reading Life at Home made me yearn not for things but for space—a plain wooden table with only a cup on it, a hotel room with only the necessary furniture and minimal decoration, or a museum in which things are carefully presented with plenty of space in which to look, ponder and absorb.

With this in mind I turned to the book A History of the World in 100 Objects by Neil MacGregor. Its mission is admittedly impossible: to tell a history of the world through 100 objects carefully chosen from the British Museum. The oldest is a stone chopping tool found in Olduvai Gorge in what is now Tanzania (1.8-2 millions years old); the newest is a solar-powered lamp made in Shenzhen, Guandong, China in 2010. In between is a vast range of objects: weapons, pots, ornaments, maps, utensils and art. Each is allowed a few photographs and around five pages of text—just enough to get a sense of the object’s place in history. The book is the companion to a series broadcast by BBC Radio 4 and it is lovely to think that all this information once had no object to anchor it; heard over the airwaves, it did not take up space or weight: just time and thought.

But in book form, A History invites browsing. It is easy to start in the beginning (the first object is a mummy, which seems to hold a universal fascination) and then, perhaps after the Clovis spear point or after the Jomon pot, skip ahead to an era or object of particular interest.  For me it was the Admonitions Scroll (an eleven-foot long series of paintings and poems from China, dated 500-800 AD), Durer’s Rhinoceros (a detailed woodcut of an animal the artist had never actually seen) and an Indus seal (a stone stamp from a civilization lost after 2000 BC whose inscription and meaning we still can’t decipher). But even as I skipped around I kept coming back to the book’s concept: one hundred objects through which to tell two million years of human history. All those lives lived and lost, some famous, some infamous, most completely unknown and unfathomable to us, a few represented only by a teardrop-shaped handaxe, a carved antler, a ring of jade. If one of my objects were to be found a thousand, ten thousand, a million years from now what would it be and what would it say?

I look again at the 114 objects sitting on my desk, most of which tell no history at all.

Only five objects represent the 20th and 21st centuries even though “[t]echnological innovation enabled more objects to be produced and used by humankind than at any previous time in history, changing the way we relate to each other and to the material world.” However, “many of these objects (particularly since the invention of plastic) have been ephemeral and disposable”—just as so many of the objects in Life at Home are. So it seems fitting that the penultimate object in A History is a credit card. A credit card can be used to buy countless objects and reflects our ongoing fascination with the acquisition of things. It is not gold or silver or paper; in fact a “credit card isn’t itself money—it is a physical object that provides a way of spending money, moving it and promising it.” And I wonder if this isn’t true of all—or most—of our objects. How many of our possessions are just a way of having spent money? How many of them truly move us the way the Ain Sakhri lovers figurine (7), carved around 9000 BC, might have moved its maker? How much of our stuff is not about use or need or even enjoyment but about promise: if we owned this shirt, this couch, this car perhaps our lives would be different, better, finer, richer?

The word “stuff” was used in Middle English to denote material for making clothes. Even though the meaning of the word has expanded over the last five hundred years we still clothe ourselves in stuff—in actual clothes from our crammed closets, in the fat that results from our overstocked refrigerators, in our cluttered houses and junky cars. But the etymology of the word goes back further, to the Old French estoffer, “to equip, furnish,” which comes from the Greek stuphein, “to draw together.”

When we had less stuff perhaps it did draw us together. An ancient chopping tool may have been shared within a group of people; a ceremonial pestle would have united groups in ritual; and a modern solar lamp in an area without electricity calls a community to its light. But now, for many of us, our stuff no longer draws us together, and it does far more than equip us for work or play, or furnish our homes with needs and comforts. It has encrusted us—our shelves and tables and floors, our bodies, and even our minds as we fret over where to put something or where to find something. Will we reach a saturation point with our stuff and consciously change our relationship with it? Or will we continue to acquire it until we break the systems that provide it?

If I could add one more object, a 101st thing to A History of the World, it would be the book Life at Home in the 21st Century. It is a relatively small object—10 by 10 inches, a little under two pounds—easily stored or transported and shared. But it shows us something very simple but tremendously important, something that can alter the course of our future. It shows us the way we live now—and with what.

Randon Billings Noble is an essayist.