You are here: Home / Book Review / After The Wind: 1996 Everest Tragedy, One Survivor’s Story 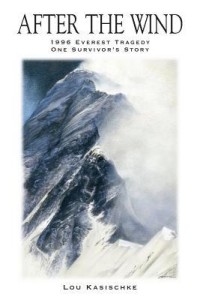 After The Wind is an autobiographical account of Lou Kasischke’s summit attempt of Mount Everest as part of the 1996 New Zealand expedition team. Kasischke chronicles the events of journey that became a tragedy not only to provide his own recount of the events and recover some truth from the sensationalism surrounding that fateful day but also to share a deeply personal story of the enduring power of love. Carrying faxes from his wife, Sandy, in his climbing suit, he attributes his survival to the promises he made  her to “live a story he could tell” and “come back home.” A mere 100 meters from the summit, Kasischke makes the decision to return to camp—a decision that saves his life. Ten individuals would die in the next twenty-four hours. While Kasischke cannot boast the same literary pedigree of climbing partner, and esteemed author, John Krakauer, After the Wind is a work that is decidedly artless and genuine in its construction. It does not look to capitalize on reconstructing the events of those who died; instead, he presents his story humbly as one man’s experience of a horrific day. The true stylistic success of the work is found in its description of the climbing itself. With sparse prose, Kasischke captures the unrelenting elements of Everest militating against his own indomitable will.