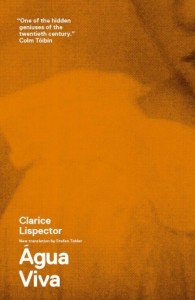 Without time, without names, without actions, Clarice Lispector’s novel Água Viva recalls the style of her other novels—a woman’s interior monologue. Here she is trying to articulate something: the thing. Loosely framed as the first attempt of a painter to use to the written medium, the impetus for turning to writing is to grasp at what is “beyond thought,” the thing, which she must do in spite of the procedure and limits of thought: “I see the fury of the visceral impulses: tortured viscera guide me. I don’t like what I just wrote—but I’m duty-bound to accept the whole section because it happened to me” (22).

Here she enacts what might be considered a deconstructive meditation on the word and the reality that exceeds words, the “instant-now” of time, the breath as flesh, and the eruptions that underlie stillness. While New Directions has published this posthumous work as a novel, it merits a more comprehensive and inclusive descriptor. Her prose encompasses poetry, truth as much as fiction, feeling and description. A hybrid text, to be sure. She writes:

Elastic. This forest where I survive in order to be is such a mystery. But now I think things are happening.  That is: I’m going in. I mean: into the mystery. I myself mysterious and inside the core in which I move swimming, protozoan. One day I childishly said: I can do everything. It was the pre-viewing of one day being able to cast myself off and fall into the abandon of every law. Elastic. The profound joy: the secret ecstasy…I am well aware that what I write is only a tone. (22)

Typically thought of as the enactment of deliberation and controlled agency, here writing happens to the writer, who must oblige the discomforts of her own inadequate expressions. Like in quantum mechanics’ Uncertainty Principle, grasping “the thing” requires certain sacrifices. The more precisely one determines a particle’s location, the less precisely one can determine its speed (and vice versa), and for Lispector, describing reality (the beyond thought) requires that the thing beyond-thought undergo the contortions of being made into thought, and thought into word, into read word, into translated word. Thus the illegitimate word is the only word.

If the form maintains an esotericism that deters some readers, Lispector’s language, as she traces the “beyond-thought,” is truly lovely and engaging on many levels, and a reader is bound to encounter at least one moment of delight. For readers who do not often venture into non-narrative fiction, Lispector’s accounts of life seem to be enact various theoretical models. For instance, her descriptions of the mirror as a living and self-constituting thing strongly anticipate the recent Object Oriented Ontology movement. Her commitment to the unification over the separation of body and mind shows an interest in feminist theory. These metaphysical inquiries are navigated through what could be the narrator’s romantic epistolary to someone (is it herself? a lover? a God?), who seems to be both the catalyst and the recipient of meaning and the word: “But I want to have the freedom to say unconnected things as a deep way of touching you” (75).

While this “novel” is deeply conceptual, it mediates constant reminders (and remainders) of the material, sensational world: she profiles flowers and colors, a cigarette burn, she ruminates time and again on her own imminent death, and you, reader—she always reminds—touch your fingers to the page.