You are here: Home / Book Review / Alien Phenomenology, or What It’s Like to Be a Thing 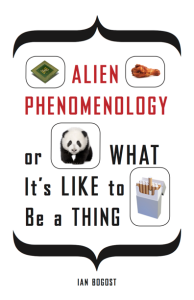 What do computer microchips, chicken wings, baby pandas, and packs of cigarettes have in common? For one, they are all pictured on the cover of videogame theorist Ian Bogost’s new book Alien Phenomenology, or What It’s Like to Be a Thing, in which Bogost argues that these objects (and literally everything else) hold just as much philosophical import as human beings. Bogost uses contemporary philosopher Graham Harman’s term object-oriented ontology as an umbrella title, under which he places his own philosophy, alien phenomenology. To break this term down, Bogost defines “alien” as “anything—and everything—to everything else” and phenomenology as “the area of metaphysics concerned with how stuff appears to beings.” So although the theory may sound dense, alien phenomenology is simply the practice of considering how everything appears to everything else—Bogost calls the process “carpentry.” An alien phenomenologist creates “carpentry” that must “capture and characterize an experience it can never fully understand, offering a rendering satisfactory enough to allow the artifact’s operator to gain some insight into an alien thing’s experience.” The possibilities of Bogost’s theory applied to fine arts, theater, music, education, and even science are endless.

Bogost puts his work into context, citing the work of Hegel, Heidegger, Derrida, Lacan, and Latour, to name a few. At the basis of these and Bogost’s theories is the rejection of anthropocentrism and the argument for considering things (or “units,” as Bogost prefers) and how they interact with each other outside of their existence for or in relation to human beings. Luckily, readers need not obtain an advanced degree in philosophy to enjoy Alien Phenomenology. Bogost breaks up long discourses on the nitty-gritty details of object-oriented ontology with “litanies,” such as “plate tectonics, enchiladas, tourism, digestion” or “quarks, Elizabeth Bennett, single-malt scotch, Ford Mustang fastbacks…,” that demonstrate his theory in action: “Lists of objects without explication can do the philosophical work of drawing our attention toward them with greater attentiveness.”

As he explains how we must reject a “hierarchy of being,” he juxtaposes the ordinary with the extraordinary, and the massive with the minuscule. Because Alien Phenomenology addresses anything and everything, enthusiasts of all kinds, not just of philosophy, can appreciate Bogost’s call for broader consideration of the world around us, instead of just the world as it pertains to us.