You are here: Home / Book Review / Belief is Its Own Kind of Truth, Maybe 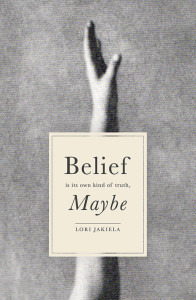 I’ve been having a hard time writing about Lori Jakiela’s beautiful new memoir Belief is Its Own Kind of Truth, Maybe. I think I love it too much. I think it hit too hard. As with the best art, I needed to chew on it and keep it to myself for a while until I found the proper words to express just how much the work matters to me.

I’ve also been struggling with the very notion of writing a review, to be honest. I had, once, a skill for it, I think. I’ve lost it. Lately, I find it hard to make my way into talking about books, especially ones I love. I find summary dreary. I find comparisons—Author C is like some crazy mix of Author A and Filmmaker B!—even drearier. You come to rely on tricks. You come to rely on the language of criticism, which is so often whacked over the head and drained of energy and life. Better to talk with friends about a great book in a bar. Better to pass a copy along to them and say, “Here. Read this. It’s fucking great!”

So, let’s pretend we’re in a bar. And let’s pretend I’m five ryes in and going on about Belief is Its Own Kind of Truth, Maybe, telling you how I just finished my second reading of it two nights ago during a power outage. It was past midnight, my wife and kids asleep, and I was savoring the last dozen or so pages as I strained my eyes reading by the light of my stupid goddamn cell phone. The book had broken me down and made me think about a lot of things that have happened in my own life in ways I haven’t thought about before. I won’t get into any of that here, except to say Jakiela’s memoir—ostensibly about her search for her birth mother but really about so much more, including the trials and rewards of parenthood—has the ability to awaken big feelings. I found myself weeping often. I found myself sifting through memories, trying to piece together my own life in the way Jakiela is piecing together hers, and—above all else—I found myself moved.

We spend our whole lives piecing our identities together, after all. Who exactly are we? Where do we come from? What does blood mean? Some of us know better than others. Some of us, abandoned by one birth parent or both birth parents, try to make sense of what it means to be left, to be someone’s mistake. It marks you. These are the questions Jakiela struggles with; in doing so, she takes on all of existence in a way that is ambitious and yet accessible.

Jakiela’s search for her birth mother—and, by extension, for herself—leads down different roads. This is, in no way, a formulaic memoir, one that relies on easy resolutions or any real sense of closure. In that way, it mimics life. We want things to make sense but often they don’t. We want to understand why people do what they do but we don’t. We make mistakes. We live with our choices. We are mistakes. We fuck up and learn and fuck up and learn, and it never ends. Life is a beautiful mess. Sometimes it’s a tragic mess.

Jakiela’s place in the world is Pittsburgh. In the present day, she’s a writer and teacher and wife and mother of two. She’s the daughter of the people who adopted her, her real parents, and she’s the daughter of a woman who wishes she didn’t exist, her birth mother. Her life is a victory and a struggle, full of love and confusion and hard work. Though deeply settled, there’s a lingering feeling of being unsettled—the result of feeling different in her family growing up, feeling like an outsider, having different features, different likes and dislikes. As a child, she believes she knows her place in the world, but that feeling—over time—leaves her.

“By 40,” Jakiela writes, “I’d finally pulled the strings of my life together into something that looked like it would hold.” But those strings begin to unravel, despite a loving husband and loving kids and gainful employment. Early in the book, she thinks of her admiration for the wrestler Andre the Giant and how the spectacle of wrestling, “the clear and simple lines, the way it was nothing like life,” is what most appeals to her and her father about the sport.

“Everybody needs a compass in this world,” Jakiela writes.

“Stet—the word editors use when they don’t correct errors because the error means something more,” Jakiela writes. “An error can be an insight. An error can be a map. Stet means ‘let it stand.’”

“There are so many versions of the truth,” Jakiela writes.

Her style is punchy and rhythmic. She moves with her memory. Her prose is beautiful and sharp and careworn. It’s impossible to be bored here. There’s no heavy exposition. We live in flashbacks just as we live in present moments. We’re alive in them.

The title comes from this wonderful passage: “The dogwood is blooming, its white petals spotted with red, another cluster of deeper red in the centers. My mother, Catholic, believed the stories—Christ crucified on a cross made from dogwood, the tree’s growth stunted in retribution for eternity, the flowers mapping his wounds, the red center a crown of thorns. ‘Dogwoods are hard to grow,’ my mother always said, proud of her care and skill, proud this one survived. I don’t think it’s true—dogwoods are everywhere—but belief is its own kind of truth, maybe.”

Later, Jakiela writes: “I want the truth and I want the lie I was born with. I want connection and I want to get as far away as possible.”

In two instances, the term “blood things” comes up. “I haven’t thought of these as blood things before but now I do,” she writes, discussing traits her children are displaying. Twenty or so pages after that: “Mistakes are not blood things. Or maybe they are.” For Jakiela, there’s always what Faulkner called “the old fierce pull of blood.” It’s impossible to escape, even as we create new families, even as we become who we are.

Jakiela writes: “‘People believe what they need to believe,’ my mother told me, but she was talking about religion, about how people told themselves stories so they could keep going even though they knew the truth about things—that there’s so little we can do for each other in this life, that everyone we love dies, no matter what.”

Belief is Its Own Kind of Truth, Maybe is a book about family and choices and mistakes and blood and belief and evidence and truth and being a parent and what it means to be someone’s child and communication and time and identity and gambling and death and paranoia and cruelty and connections and strangers and wounds and how stories save us. It’s a book that puts all the pieces of a life on the table and sifts through them carefully, beautifully, trying to make sense of what needs to be made sense of, not hiding from anything, not passing judgment. It’s honest and raw and real and says something true about being alive. I’m sad to be done with it. I hope you’ll read it.

William Boyle is the author of the novel Gravesend and the story collection Death Don’t Have No Mercy.