You are here: Home / Fiction / Bigger 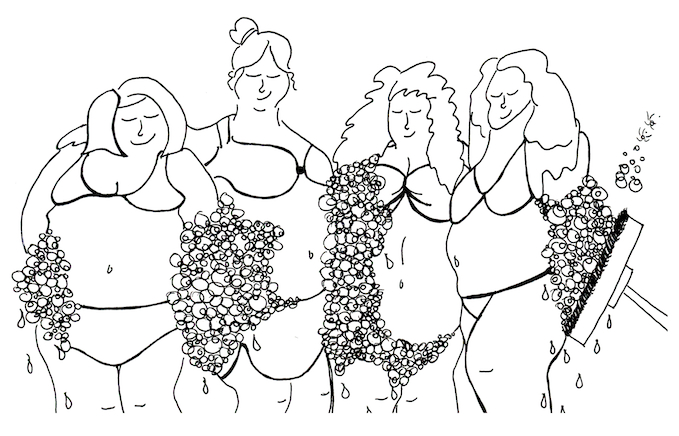 Technically, the condition was inoperable. The doctors had never seen anything like it and neither had the dressmakers.

The girls lived in the old farmhouse on the top of the hill with their sweet mother Linda. It’s not the kind of sick child story you’re expecting. The way these girls blew up over night, the town didn’t know what to think. They arrived tired little weak things, but that sweet Linda got to cooking in her kitchen and feeding those little girls all the right things, and soon enough all thirteen of them started filling out.  More than filling out really—they started blowing up.

Sweet Linda didn’t know what to do. When she wasn’t cooking in that farmhouse kitchen, she was in her sewing room tacking together blankets and Christmas tree skirts into dresses for her growing girls.

“Don’t you think they’re filling out a little too much?” the women said at church.

“Maybe give them a few more vegetables and a little less meat,” the butcher said.

But it didn’t seem to matter what sweet Linda fed them. Her girls were determined to grow. “My girls are destined for big things,” she liked to say.

And the bigger they got, the happier they got. They woke up giggling in the morning and sometimes found themselves sleep-dancing in the night. Sweet Linda taught them how to polka and if you peeked inside the farmhouse curtains at night, you might see a few of them dancing together, hopping back and forth with their eyes closed.

Sweet Linda was very protective and didn’t let many people in the house, especially the men. She said, “Go away you grumps, this isn’t a circus we’re running.” She shut the curtains.  She said, “Girls let’s have a party!” And you knew when they all got to dancing, because the earth started to shake, and sometimes your pictures fell off the wall, and you just had to throw your hands up in the air and say, “They’re at it again!”

But by the end of the first year, they got too big for the house and sweet Linda started to look worried. “I don’t know what to do,” she told her hairdresser, “They’re just getting way too big for the farm!”

Nancy, the hairdresser, had an idea. She called her husband Jim who was in charge of the summer fair, which had just ended the week before.  “Say, Jim, what do you think about Linda’s girls staying a while out at the fair grounds?  With the fair over, I don’t guess much is going on there.”

“I can’t see why not!” Jim said. And sweet Linda thought it was the best idea anyone had so far, so she drove out to the fairgrounds that night and had a look for herself.

The large stable was really the best option on the property, given its size. Now for a brief moment, sweet Linda cringed at the thought of her darlings moving into a stable, but she was a forward thinking woman and made up her mind to make the best of it.

When she got home, the girls were out on the lawn having a polka fest. Sweet Linda got right in the middle of it all and said, “Babies, pack your things, tomorrow you’re moving into a castle!” And there was a whole lot of cheering and stomping and whooping about it. The girls were getting awfully cramped at the farm and they knew they were destined for bigger things.

Little did they know how big. After they got settled into the stable, the girls really got to developing. Their bodies continued to grow, sure, but other things were happening too. Several of the girls picked up oil painting. Sweet Linda set up an exhibit for them in the back of the stable. They seemed to possess an innate and instant talent for the medium. And the art world seemed to agree. As much as sweet Linda feared the judgment and influence of the outside world, she knew her girls were destined for bigger things. She organized several shows in their honor with much success.

They were also into dance and opera and produced several shows on the stable lawn. Critics called their work “bizarrely fresh,” and “oddly compelling.”

As artists they were, above all, dedicated to continued and deeper perception. “It just keeps getting better and more intense,” one of them said in an interview.

But their growth was not limited to artistic pursuits. They also began investing sweet Linda’s money into stocks and bonds. Her wealth had multiplied exponentially over the course of a few months. They had twice been investigated for insider trading, with no acquittal, due to their suspicious sense of timing.  And they were on the cusp of curing that whole cancer thing. They just needed a few more months of testing.

In short, the girls could not be contained and the town was taking note. People started having conversations. They were reading books. They were staying awake past eleven. They were feeling things and doing something about it. Years later, historians would pinpoint the stable as the epicenter of the Midwestern renaissance.

But sweet Linda got to worrying about her girls the day she came to the stable and found them all sitting in a circle in the front lawn. They were playing their over-sized orchestral instruments given to them in connection with a grant they had recently received. But they weren’t playing Brahms or Vivaldi or even Strauss, they were just playing the same note repeatedly without breath.

“Isn’t it thrilling!” the youngest said when their mother approached.

“I guess so,” sweet Linda said, but she didn’t get it, and she started getting those prickly feelings all up and down her arms. “I guess you all are just getting too smart for your mother,” she said.

They played the one note performance for three days straight until they collapsed one by one into a deep sleep in the grass. When they woke, they looked at the sky and at each other and they had never felt happier. The world was magical and there was so much to perceive. You could split up the seconds smaller and smaller, deepening your perception with each division. They hosted a lecture series on such matters lying on their backs, staring into the sky, sometimes touching their hands to their faces and remarking on the sensations of this movement.

The girls stopped getting out of bed. Sometimes they didn’t even open their eyes. It was all too much and too wonderful. The town saw thirteen overweight, bedridden giants sleeping in a stable. The girls saw a magical play land of energy and light. And poor, sweet Linda kept coming day after day to wash their bodies down with hot soap and water. She washed them with a broom like elephants at the zoo.

She couldn’t wash them all in one day, and often the exercise exhausted her completely. On one particularly warm, summer day, sweet Linda had fallen asleep after washing half of them, lying down in the grass in front of the lawn, unable to contemplate the drive back to the farm.

During this slumber, Lakshmi awoke, seeing her mother in the front lawn. And despite the excruciatingly loud sounds of the crickets, the pungent smell of earth, and the advanced calculations she was performing on humidity and air density, Lakshmi decided to get out of bed and pick a single flower for her mother.

The whir of the wind was intoxicating—the molecular structure of the grass divine. It was all so thrilling that she only took two steps outside of the stable before collapsing into the grass where she lay for hours looking out at the world. Moments before her death, she saw her mother’s flower—so beautiful, so delicate, so arousing that her body could simply no longer bare it.

N. Michelle AuBuchon holds an MFA in creative writing from Sarah Lawrence College and lives in Brooklyn. Her work has most recently appeared or is forthcoming in The Weekly, Rumpus, Caketrain, Vol.1 Brooklyn, Washington Square, Gawker, No News Today, and Swink. She is currently working on a novel-in-stories.