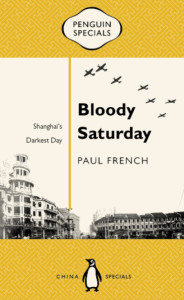 Saturday, August 14, 1937. As Shanghai woke up peacefully in the aftermath of a typhoon that didn’t quite hit the city, its inhabitants had no idea of the horrors that awaited them before nightfall.

In the 1930s, Japanese troops occupied much of northern China, with occasional skirmishes also occurring further south. One such encounter, on August 9, 1937, resulted in the deaths of two Japanese soldiers, when they apparently tried to force their way into the Hungjao (Hongqiao) Aerodrome to the west of Shanghai city. In response to what they considered a provocation from the Chinese, the Japanese military command sent its Third Fleet on a punitive mission to Shanghai, an undertaking led by the armoured cruiser Idzumo. This set off an unfortunate series of events, eventually leading to thousands of dead Chinese and hundreds of dead Shanghailanders—foreigners predominantly based in the International Settlement and the French Concession.

Based on numerous eyewitness accounts, Paul French paints a vivid, well-researched picture of the events resulting from what was intended to be a Chinese-Japanese battle over the city’s control. He is a masterful storyteller, taking the reader effortlessly on a journey of suspense, violence, and utter horror—although he may have actually understated the severity of the situation for the city of Shanghai as such: in essence, the city died on this day; it has never been the same since. I was rapidly pulled into the story and finished the entire narrative in one sitting—as such, I was clearly part of the intended target audience of this Penguin Special edition, since these publications are meant to be sufficiently short and written in an engaging style to while away a few hours.

French is clearly very familiar with the city of Shanghai and its modern history, but that could, at the same time, be somewhat problematic for the reader who may not be. The story jumps straight into the events of August 1937, on the unspoken assumption that the reader will be similarly familiar with the city’s layout and the history of the interactions among the various populations of foreign citizens residing there. A somewhat more expanded introduction outlining the basic history of the foreign concessions would have been helpful, and an overview map is sorely lacking: we have to wait until page 65 until a map is presented, which however only covers an incomplete collection of the narrative’s main locations.

Nevertheless, these issues do not really distract from the book’s compelling story line. The events leading up to and the aftermath of the bombing of the International Settlement and the French Concession, of which we get the impression that they were indeed accidental and to some extent to blame on the Chinese aircrew’s inexperience with the type of mission they were expected to complete, instill a sense of awe in the reader. What an unfortunate set of circumstances that led to bombs meant to attack the Idzumo to land on the Settlement’s Nankai Road! The carnage must have been horrendous, as evidenced by the carefully selected eyewitness accounts presented here. And then just a mere quarter of an hour later, a second carnage followed at the Great World amusement center in Frenchtown, said to have been caused by inadvertently dropped bombs from a badly damaged Chinese aircraft.

If it was French’s intention to give the reader an unprecedented view into the horrors faced by the city’s foreign inhabitants—that is, collateral damage in the pre-World War II Chinese–Japanese aggression—he succeeded with flying colours. Yet, throughout the narrative, I couldn’t help but wonder what had happened to the city’s Chinese population. During the horrendous events of August 14, 1937, the Idzumo’s relentless shelling of the Chapei (Zhabei) District continued, resulting in numerous fires, injuries, and casualties among the Chinese population and their possessions. French does not address the events in the city’s Chinese districts in much detail, although they must undoubtedly have been at least as horrendous as those affecting the foreign population. Granted, he states on a number of occasions that numerous Chinese inhabitants were killed, often too many to even be recorded.

Keep in mind that the Japanese onslaught of the Chinese districts had started on August 12 and continued until well after the accidental bombing by Chinese planes of the city’s foreign concessions. The Chinese death toll must have been many times higher than that of the foreign population, however bad the latter may have been. The book would have been more balanced if Chinese eyewitness accounts could have been included as well. As good, well-researched, and engaging as this narrative is, the one-sidedness of the eyewitness accounts is a real shame. Perhaps next time Paul French might consider to also delve into the relevant Chinese records and not only rely on Western accounts of what ultimately was a Chinese battle.

Richard de Grijs combines astrophysics research at Macquarie University (Australia) with a keen interest in public engagement. He is the author of a monograph on the history of science, Time and Time Again (IOP Publishing, 2017), and is former editor of the Journal of the Royal Asiatic Society China.