You are here: Home / Book Review / I Must Not Think Bad Thoughts 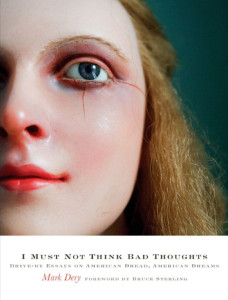 Legendary record producer and gun-toting misogynist Phil Spector never liked the LP. “Two hits and a lot of shit” was his verdict on the album. Much the same can be said for most essay collections by most cultural critics, particularly those who have no real focus in any particular discipline. Over the past decade, Mark Dery has pumped out a fair number of screeds on the web and University of Minnesota Press has temporarily rescued them from irrelevance and obscurity. Dery is known in certain circles for coining such concepts as “culture jamming” and Afro-futurism. If their descriptive shelf life was brief, they no doubt worked a certain magic on university administrators and horny, albeit ambitious, minx at Modern Language Association conventions.

Dery is the quintessence of a tenured radical who won his prize in the days when French theorists ran their swindle of verbal jujitsu on the earnest rubes of the American academy at the same time conservatism re-asserted itself in Cold War politics. As such, in his introduction, he can’t help but re-litigate the Reagan decade of the 1980s. Dery, like so many others, points to David Lynch’s film, Blue Velvet, as the explanatory lodestone of America’s dark heart beating behind a corrupt Norman Rockwell canvas. Dery discusses American Gothic at some length yet fails to mention Joyce Carol Oates seminal short story of the sixties, “Where Are You Going, Where Have You Been?” There is a direct link between Arnold Friend (Oates) and Frank Booth (Lynch) and the charge flashes all over fly-over territory, the real terrain of this book.

Dery’s two unmitigated “hits” come early in the collection. He masterfully surveys the rise of zombies and vampires as “totemic monsters” of our age. Dery contends that they are great vehicles for exploring class and racial inequities and villains in modern capitalism. Even White Nationalists embrace the zombie motif, allowing them to lock and load into survivalist mode, waiting for the hordes from “multi-culti cities” to descend on the heartland.

In the essay “Mysterious Stranger,” Dery contemplates the centenary of Mark Twain’s death through the lens of his own obsessions and shoots a bullseye. Speaking of Twain and Huck Finn, Dery notes:

His mythic portrait of the American psyche is in some ways a self-portrait. He captures our Hallmark sentimentality at odds with our love of violence; our Reaganesque nostalgia tripping over the half-buried bodies in our genocidal history; our lip service to Christian ideals making a jarring noise against the ugly reality of our bigotry. And he manages to conjure a world that is terrible and comfortable at the same time because his yearning for a boyhood lost in times is as sincerely felt as his fury at racism and ignorance.

Dery is a competent marksman; he needs to choose better targets. He offers an unconvincing ditty on David Bowie and his Ziggy Stardust period. After almost 40 years of rock critics and sinecure-seeking scholars waxing poetic on glam rock, who gives a shit? Ziggy Stardust pales in comparison to The Thin White Duke era (sandwiched between Ziggy and Bowie’s Berlin adventure with that lamentable scumbag Iggy Pop) in which a coked-out Bowie staggering about in a white suit inexplicably produced feisty, blue-eyed soul on Young Americans and the incomparable Station To Station. Bowie’s two-year lost weekend in L.A. is significant because it seems the only time the real David Bowie lost control of himself and stopped peddling his Andy Warhol “phony celebrity” rubbish to the kids and the music press.

Dery further tests the reader’s patience detailing the peevish bona fides of his “rockism” before he tees up Lady Gaga as an exhibitionist ninny who cluelessly borrows from the flotsam of Queen, oblivious to the campy genius of their jetsam. Yet, save for the name, Lady Gaga has absolutely nothing to do with Freddie Mercury and his British musical hall mincing and capering. Long before the weak masquerades of Madonna and Lady Gaga there was Mina Mazzini, the great Italian singer who was the musical linchpin of Pedro Almodovar in his early, overheated melodramas. Mazzini thought nothing of changing her look on a dime by sporting a wig, shaving her eyebrows or slashing on outrageous makeup. She could sing like a bird but often screamed like a macaw, daring the orchestra to either drown her out or make her sound great. She was the original Gaga.

Dery grudgingly admires the visual chaos of Lady Gaga’s “Bad Romance” video but hates the music. What gives? The real problem is that Dery is one of those guys, like Anthony Bourdain, who have to shit on disco and its generations of “troubled” devotees in order to help prove their cred as gonzo badasses keeping the flame of Authentic Rock. I’m sorry, my son, but I grew up in the 1970s and I loved the Stones and Giorgio Moroder. The gay disco hit, Macho’s 18-minute cover of “I’m A Man,” improved on the Stevie Winwood classic. You’d think that guys like Bourdain and Dery would have wised up long ago: the best looking chicks with the least number of tattoos were at the disco, not in the punk rock moss pit. Shut up and dance I say. I defy anyone under the age of a hundred not to start tapping a foot when you hear Gaga’s “Pokerface” or the shameless Garry Glitter kick drum of Katy Perry’s “I Kissed A Girl.” The schlock single is queen. Alas, for gents of a certain age, Hunter S. Thompson is still king.

With material like this, Dery necessarily comes on pretty strong. All his bluffing and riffing and posturing are delivered on a freight train of over-caffeinated culture vulture nattering that overwhelms on one level and underwhelms on another. To use Dery’s favorite tic, it’s “like David Foster Wallace channeling Quentin Tarantino channeling Don Delillo.” In the course of this collection, we learn: Dery doesn’t like jocks and thinks their interest in sports and locker-room shenanigans signals homophobic panic; he quarreled with his stepfather; he thinks Madonna’s big toe in a Versace ad means something; and, he scores “quite well” on an IQ test. He also has a look at the fetish of anatomy, above and below the waist, the latter courtesy of Annie Sprinkle and her feminist recreational gynecology.

Dery’s act might work better on stage in front of a college audience sympathetic to edgy flummery. You’d have to go back the 1980s to find a true master of cultural criticism plate spinning, though. Artie Kroker, the man who gave us The Panic Encyclopedia, used to come on stage to a blaring Donna Summer number and then foam at the mouth under black light for a good hour, inveighing against the poisoned detritus of American popular culture. At least you got the sense from Kroker that he knew he was running a scam, taking it way over the top to make his point, both on the page and the stage.

Dery’s central problem, then, is that he leaves you neither hot nor cold, neither amused nor abused. He just keeps throwing shit against the wall and hoping some of it might stick, I suppose. In his forward to this book, author Bruce Sterling is left to damn Dery with faint praise. “For a doomy poète maudit, he sure shows remarkable consistency and staying power.” Alas, slot machines chime one note just as well and sometimes you actually get a payoff.