You are here: Home / Book Review / “What a small worlde the worlde of poetry is…”

A Question Mark Above the Sun: Documents on the Mystery Surrounding a Famous Poem “By” Frank O’Hara, by Kent Johnson, Starcherone Books, 2012. 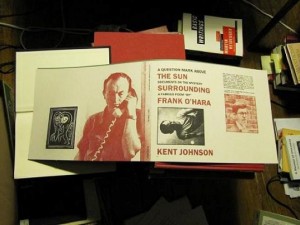 Kent Johnson’s A Question Mark Above the Sun: Documents on the Mystery Surrounding a Famous Poem “By” Frank O’Hara is a remarkable book, a work with subtly dizzying implications. It suggests that Frank O’Hara’s well-known poem “A True Account of Talking to the Sun at Fire Island” may have been written by O’Hara’s close friend, poet Kenneth Koch, and passed off as O’Hara’s. Johnson supports this with biographical details and textual criticism, delineating multiple possibilities and counter-possibilities. Pretty soon the (or rather, this) reader is withdrawing, wondering why anyone cares who took O’Hara’s typewriter or what kind of paper he used—indeed, why it matters who wrote it at all. At its most basic, that’s the point of the book.

Although Johnson has built a deeply nuanced argument for his thesis, the literary estates of the two dead poets view his suggestion as a malicious attack on the work of Koch and O’Hara. When an earlier edition of Johnson’s book was scheduled to come out in 2010 from Punch Press, the estates exerted pressure to have the book entirely suppressed. Random House, a publisher of both poets, joined the estates in threatening Richard Owens’ tiny Punch Press. Nonetheless it became a 2011 Times Literary Supplement Book of the Year, and now appears in expanded form from Starcherone Books Inc. The estates have refused permission for Johnson to quote any O’Hara or Koch poems, but Johnson gleefully notes every redaction and offers a paraphrase. Just what were you expecting to accomplish? he seems to ask the estates. And just what are you protecting? It is a testament to Johnson and Starcherone that this book has come out, joyfully bearing its redactions like war-wounds.

The crowning jewel in the volume is Johnson’s review, titled “Corroded by Symbolysme: An Unfinished Novella,” of four British avant-garde poets’ “bookums” (books). It’s a four-part review-cum-mystery-thriller, complete with idiosyncratic olde spellinge and a secret society set up to protect the secret of Koch’s authorship of the O’Hara poem. Stand aside, Dan Brown. Criticism, review, and fiction coalesce with fantastic results. The microcosm of the British avant-garde poetry scene gives Johnson plenty of opportunity for complex, nuanced parody and ironically high-flown musings on literature. Female poets do not feature, but it appears to be a section of a larger project that Johnson is working on, so this may be remedied. The reviews also put forward a kind of artistic credo from Johnson, whose work revels in the paratext, which he describes as “infinite” to J.H. Prynne.

The very form of this book seems to bear this stamp; while Johnson’s work takes up the bulk, the book feels like a symposium on itself. It’s a book by a poetic community about the strangeness of poetic community. There’s a kind of shamelessly wonderful onanism to it. In another sense it’s an orgy, an immense co-operative project. It consists of a preface, a foreword, the introduction followed by the novella, followed by the first appendix of responses to the book from the blogosphere and beyond, a second appendix (for this edition), two afterwords, and an anonymous poem, presumably by Johnson. Contributors include Eric Loeberer, David Koepsell, Tony Towle, David Shapiro, John Bradley, Edmond Caldwell, Richard D. Allen, David Hadbawnik, Mark Scroggins, Michael Kelleher, James Pate, Joshua Kotin, and Ron Paste. Their pieces are often very thought-provoking. Many of them feel the need to restate and rephrase key sections of this very book. Although very necessary in their initial context on blogs etc., this gives the volume a rather cumbersome and repetitive feel. (The very structure feels odd, as Johnson’s introduction demands we leap straight to Appendix I’s first essay to find the book’s raison d’etre.) This ungainly feel, however, adds to the satire, and chimes in with certain key refrains in Johnson’s novella.

As such, one feels a wry Johnson watching over the other authors, the host at the party who has silently slipped hallucinogens into everyone’s drink. They’re all endlessly laughing at Johnson’s joke, retelling it to each other. Touching the carpet. Of course, most of the poet-critics don’t mind—but Tony Towle, in particular, is having a bad trip. Which is not to say that these additions aren’t enlightening and entertaining; in particular those by Kotin, Bradley, and Hadbawnik.

Johnson is a forger-critic so content to hide in plain sight that he probably won’t bat an eyelid at this label.[1] Johnson makes of the author-question a new occasion, a new expression. As such, this cannot help but involve some self-expression on his part. But it also does much more. He wants to find the biting point between the author and anonymity. Johnson is best-known for his involvement in the Araki Yasusada hoax. The publication of Yasusada’s poetry by major literary journals such as the American Poetry Review, Grand Street and Conjunctions during the early 1990s created an embarrassing scandal for these publications, who had to defend themselves against charges that they only published the poetry because it was clearly tailored to American preconceptions of what Japanese poetry is. Because Yasusada, shock-horror, never existed. Johnson has claimed that Tosa Motokiyu is behind it, but Motokiyu is the persona of another dead, unknown Japanese poet.[2] The re-appearance of Motokiyu in A Question Mark is striking.

Motokiyu advances, in an appendix, the book’s central thesis. In doing so he refers to books published after his “supposed” death, Johnson notes.[3] It momentarily seemed to me that Johnson was coming closer and closer to outing himself—not that it matters who perpetrated the wonderful Yasusada corpus. But it’s clear from interviews that Johnson never will, even if it was him. Perhaps it was Koch. He’s content to muddy the waters and spread seeds of doubt into the authorship of other oeuvres. Now, with A Question Mark, he’s yoking together a superlative body of work that includes his edited collections and the Yasusada material.

“What a small worlde the worlde of poetry is…” a heavily ironized Johnson muses in his novella. He’s right: the world of poetry and its readers is small. It is this small audience who will likely take most enthusiastically to the book (probably already knowing his work), revelling in Johnson’s barbs and hopefully responding to his call for reform—a call, I think, for greater modesty in authors, coupled with more experimentation and, most importantly, radical actions to back up radical words. Would this be enough for the book’s dedicatee, the revolutionary Mayakovsky? I have no doubt that the poet’s brain matter, housed in Room 18 or 20 of the Moscow Brain Institute, will miraculously have an increase in serotonin levels this autumn. Each reform is a straw on the dromedary’s back. 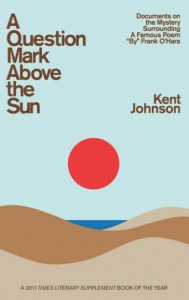 [1] Cf. http://theclaudiusapp.com/3-johnson-dworkin.html.
[2] For more on this, cf.: Scubadivers and Chrysanthemums: Essays on the Poetry of Araki Yasusada, ed. Bill Freind.
[3] Johnson, A Question Mark, 136.