You are here: Home / Book Review / Both Flesh and Not 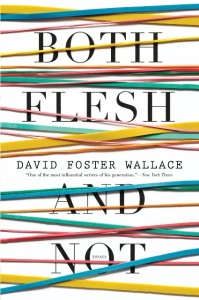 Some folks’ deaths loom large. These passings linger over everybody else’s lives the way an ex-partners’ old shirt remains in a lump in the corner of your closet. You can’t get rid of the shirt. You can’t wash the shirt because washing it would be destroying the part of the shirt that you loved the most, which is whatever remained of the person who left it behind. Maybe it will go in a box with the other things that Charlene or Craig left laying around the house, and you might pull the box out from time to time and rummage through it, or just hold it like it has some sort of life of its own. Whatever happens to it, it is a kept thing that you might eventually forget, but you will never discard.

The critical consensus on David Foster Wallace’s posthumous non-fiction collection Both Flesh and Not is that it is quirky, imperfect, brilliant at times and occasionally incredibly pretentious. The other thing to which everyone unwittingly agrees is that it is impossible to write a review of anything written by David Foster Wallace after his passing without addressing his death, legacy, ouvre, what-have-you. And really, it is impossible. What was The Pale King but an act of love produced by Wallace’s survivors, from the delicacy of the editorial process to the beautiful cover art created by Wallace’s widow? Conversely, how does the reading audience handle the release of This is Water in a boutique publication? (Some on-line critics have accused publishers of scraping the coffin, but that seems altogether harsh. Writers write and publishers publish). And in the here and the now is Both Flesh and Not, a collection of previously published works arranged in a careful but not necessarily particular order. Like The Pale King, the book itself is an object to hold and consider. The rubber bands on the cover stretch across the title, and you feel their three-dimensional depth as you run your fingers over them. Flip it over and find that this is not in fact a book, but according to the back jacket “Both Flesh and Not is a fitting tribute to this writer who was never concerned with anything less important than what it means to be alive.”

Of the 336 pages in the the collection, 56 of them are non-narrative pages, which is the best way that they can be described. Some are blank, but primarily they are a separate text, comprised of the running dictionary of words that Wallace kept for his work on the Usage Panel for the American Heritage Dictionary of the English Language. In and of themselves, they defy traditional text, with lines running horizontally across the span of two pages, producing that all-too-Wallaceian frustration one experiences when reading a text that resists being read, like foot-notes or end-notes or technical jargon or unexplained abbr.’s. But in this case it’s more like reading someone’s sticky-notes, or marginalia, or in a small way a person’s love letters (“Achates—a loyal friend; faithful companion to Aeneas in The Ae [and here the text crosses the gutter] neid”). Upon these pages we pause, while the previous piece settles into our brains, and the next remains unread. And that thoughtful time is penetrated by this wall of words that an editor has decided to insert into the interstices of Wallace’s arguments and essays, both art and not. (“brattice—partition in mine; breastwork erected during siege”). It’s this construction—this attention to materiality—that makes Both Flesh and Not something other than a non-fiction collection. One is constantly reminded that this is a tribute, a product of the Wallace foundation, and further that there will be no more David Foster Wallace definitions or digressions (though there may be more collections and tributes). So we cling to the words and all the while find them abrasive.

Of course, there is the text itself. The essays, reviews, thoughts. This assemblage doesn’t always come off as being as polished as his other non-fiction collections, A Supposedly Fun Thing I’ll Never Do Again and Consider the Lobster. But, of course, a tribute is something different from a collection that an author produces, cultivates, broods over. While the title piece, “Federer Both Flesh and Not” represents Wallace at his non-fictive best, making this reviewer feel the literary equivalent of what Wallace himself calls “Federer Moments” (Read it. You just have to read it.), there are also pieces that lack that inexplicable brilliance in some way or another. Not that it makes these lesser pieces terrible, but the works assembled here span the entirety of his professional writing life, some coming out while he was in graduate school, when he hadn’t fully encapsulated the nuances of his irony. Or otherwise he reaches into territory outside of his literary comfort zone. The prime example, used by other reviewers as well, is “Back in New Fire,” a brief essay about the AIDS epidemic, where Wallace asserts that this terrible plague might have some advantage, that “it could well be the salvation of sexuality in the 1990’s.” He says this in terms of the value of impediments to love. Without dragons to slay, or in lieu of social mores, AIDS is that generational fire that a person has to get through to find love. And I see what he’s getting at. In fact, “Back in New Fire” reminds me of the sort of post-post-modern sincerity that Wallace writes about in so many of his other works. Only he’s writing this in 1996. Maybe he hadn’t quite figured it out yet.

Most readers probably won’t read this book cover to cover. As Wallace says in “Deciderization 2007—A Special Report,” his introduction to Best American Essays, “If you’re like most of us, you’ll first check the table of contents. . .Then you’ll go by title, or apparent subject, or sometimes even first line. There’s a kind of triage.” But there is value in every piece in this collection, from the genius strokes to the brilliant failings, because the collection does something that none of Wallace’s other works do. It shows Wallace without the polish, the panache, the pitch-perfect snark. All of that’s there, intermittently and not always on time. But it’s all Wallace, sometimes in ways he might not have wanted to be remembered. These are the things that were left laying around the house, that have been gathered up and placed in a box, available for your perusal whenever you want to breathe in that remnant of what once was there.