You are here: Home / Book Review / Boxing the Compass 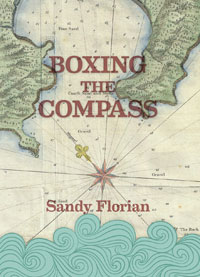 In Sandy Florian’s Boxing the Compass, the reader encounters a novella by an author whose restlessness with English pushes her to reinvent her idiom altogether from work to work, as readers of Florian’s Telescope, Prelude to Air from Water, and The Tree of No can attest. In Boxing the Compass, a third-person narrator follows a woman reluctantly waking into her day, an anniversary of her mother’s passing. The woman rises from her bed, dresses, leaves her apartment, walks to a bakery, buys bread, returns to her apartment, heats water for tea, writes, undresses, takes a bath, dresses, leaves her apartment, boards an urban commuter train, and rides toward a graveyard to visit her mother’s burial site.

The novella threads this apparently straightforward plot into the complex weave of the woman’s memories of her mother, father, and brother; her forebodings about the earth’s rising temperatures and sea levels; and her meditations on time and space, all in relation to and in terms of the conceit of boxing the compass: the naming in clockwise order of the thirty-two points on the compass. Thus the brief chapters take their titles from points on the compass; the titles range from “0°” to “348°45′.” There are thirty-two chapters, so as the reader reads, the reader engages the action of boxing the compass.

And in the space and time of reading, the reader lets happen in imagination the day the novella evokes, each reader heading into that day with the woman. In the course of her day, relaxing down into her bathtub, the narrator dreams of sinking into ocean depths. Boxing the Compass might make fans of contemporary opera think of Gavin Bryars’s The Paper Nautilus (2006), which dramatizes a dream-like journey into abyssal ocean depths, with the melancholy soprano singing in homage to the oceans, her lyrics by turns scientific, biblical, and poetic.

Boxing variously echoes poetic, biblical, and scientific writings, but reading Florian’s novella is a much more participatory event than attending Bryars’s opera. Bryars quite reasonably includes neither room on stage nor a pause in the vocals allowing for audience participation, no spatiotemporal blank inviting operagoers to navigate the boundary between the stage of the world and the world on stage and try out their voices. Boxing plays marvelously yet unnervingly with the borders distinguishing the reader’s world from the worlds the narrator narrates and the character inhabits, boxes within boxes.

Each reader of Boxing will read a given copy at a spatiotemporal location of determinant civilizational provenance. Yet each reader will give that specific space/time the slip to enter the woman’s day. Through imagination, each reader participates when the woman bypasses how compasses and clocks rivet in measure the here and the now. The woman gives the clock and the compass the slip to give herself the time and the space to write and for a bath. Every reader of Boxing will participate in the suspension of clockable time and mappable space the woman endeavors to take her bath.

Sinking down into her tub, the woman dreams down and out into trackless, timeless ocean waters, a sublime the narrator is careful to note outdoes in depth what the Himalayas boast in height. The injunction “come here, come now” echoes through the novella. The here and now Florian imagines toward is inescapably each reader’s, insofar as each reader exists toward the unavoidable and irreversible catastrophes of familial loss and climate collapse, a here and now entirely intrinsic yet wholly extrinsic to the here and now of civilization and its routines. Boxing lets the here and now haunt the here and now.

Interweaving a daughter’s grief for her deceased mother with the daughter’s meditations on the oceans undergoing climate change, Boxing the Compass performs a profound and profoundly uncanny work of mourning, holding together in a single imaginative vision intimate human bereavement and implacably non-human processes. A more challenging literary project is hardly conceivable, yet how else will the irreducible finitude of the earth’s biosphere become thinkable for twenty-first century humans except by a subtle yet bold reimagining of configurations of emotion, thought, and belief accessible only in the self’s deepest interiority?