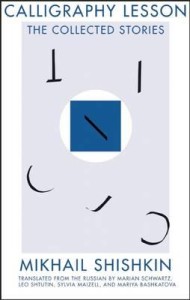 Mikhail Shishkin, one of the most highly acclaimed contemporary Russian authors, has won all three major Russian literary prizes: the Russian Booker, the National Bestseller Prize, and the Big Book Award. In 2012, he was Russia’s representative at the Book Expo of America. In 2013, he was invited again. He refused to represent Vladimir Putin’s Russia because of the political degeneration of his motherland over the past year. He stated in an open letter: “Russia’s political development, and the events of last year in particular, have created a situation in the country that is absolutely unacceptable and demeaning for its people and its great culture.”

Calligraphy Lesson: The Collected Stories, Shishkin’s first collection of short stories to be translated into English, explores the dissolution and backwash of the Soviet Union. The leading question of this collection concurs with one he asked in a recent op-ed piece titled “How Russia Lost The War” which appeared in The New York Times: “If the fatherland is a monster, should it be loved or hated?”

Stylistically, contemporary Russian literature is a pitched battle. Authors like Victor Pelevin and Vladimir Sorokin are decidedly postmodern. They boldly experiment with form, plot and the boundaries of the profane. Pelevin’s Generation P, in which P stands for Pepsi, is a Carrollian trip through the post-Soviet world of consumerism, drug culture and fantasy. In contrast, authors like Tatyana Tolstaya and Ludmilla Petrushevskaya represent a brand of dirty realism. They dissect the harsh conditions of Soviet and post-Soviet famine, both the physical and metaphysical. For example, in Petrushevskaya’s story “There Once Lived a Woman who Tried to Kill Her Neighbor’s Baby,” a woman trapped in desperate economic circumstances and the claustrophobia of tight group housing becomes obsessed with murdering her neighbor’s baby.

Shishkin represents a unique negotiation between these two camps. He has certain post-modern proclivities, such as in the title story, “Calligraphy Lesson,” which centers upon the act of writing as erotica. However, in large part, Shishkin’s stories are traditional narratives that harken back to Lev Tolstoy and Anton Chekhov. As explained by his translator, Marian Schwartz, “translating Shishkin means maintaining his virtuosic tension between complex detail and deeply felt emotion.” That is, likewise, the experience of reading Calligraphy Lesson; characters with great pathos navigate a distinctly post-Soviet bedlam.

In the autobiographical opening story of Calligraphy Lesson, “The Half-Belt Overcoat” (an unabashed tribute to Nikolai Gogol) Shishkin discusses the provenance of his masterpiece novel, Maidenhair. Before her last operation, his mother gave him a thick, oilskin notebook filled with her girlish handwriting, which inspired the novel. She was a teacher of Russian language and literature, and an intrepid Party member. Shiskin recalls, “she would equally have sent me off to Afghanistan not only with sorrow but with a sense of having fulfilled her mother’s duty to the nation.” But as regimes shifted and Yuri Andropov came into power, a cavalcade of catastrophe came down upon her. She was fired from her job and then fell ill, first her heart, then cancer.

Before this tragedy, Shishkin distinguishes himself from his mother by what he reads. While she read Brezhnv’s ghostwritten memoirs, he reads Varlom Salamov’s short story collection The Kolyma Tales and Aleksandr Solzhenitsyn’s literary-history The Gulag Archipelago, books about labor camps which were officially banned at the time. These books define Shishkin both politically and existentially. In Calligraphy Lessons, he explains, “Pushkin was a secret code, the key to the preservation of the human in this bedeviled country.” From Pushkin, Shishkin culled the most essential human emotions, repressed in a monolithic dictatorship.

Yet Shishkin does not blame his mother for her superannuated politics. He theorizes that what makes a good teacher is one who cultivates characteristics that will help them in that world. A bad teacher is one who instructs his charges to live by a different one. His mother was a hapless woman of integrity caught in changing political winds. He writes of his mother:

She never did anything but sing—like that grasshopper from the fable. Only in real life the survival of the ants building that Babelian ant-hill up to the heavens and turning into camp dust depended no less on her singing that on the supplies for the winter. She was the proverbial candle that illuminated, however faintly, their darkness.

While his mother’s politics were those of an antiquated regime, her stalwart sense of duty and preservation human dignity empowered Shishkin to write his novel. Recognizing the faults of the Soviet Union, Shishkin points to its citizen’s integral “human dignity” as endowing them with the potential for something greater.

The story “Nabokov’s Inkblot” describes a converse twist of fortune. The protagonist is an impoverished translator, who has emigrated from the USSR to Switzerland (much like Shishkin himself). After the fall of the Soviet Union and the rise of wild capitalism in Russia, the protagonist is asked to act as the translator for a rich Russian bank executive, Kovalev, visiting Switzerland. The cretin turns out to be one of protagonist’s former classmates.

Corrupt Kovalev has made so much money in the dissolution of the USSR (“money smell everywhere…but in Russia, money reeks”) that he has decided to stay in Vladamir Nabokov’s room at the Montreux Palace. The protagonist is ecstatic to visit the sacred place, so he can peek at the rumored inkblot in Nabokov’s desk. He recalls:

When we were young, Nabokov was banned. You had to copy him out by hand, type him on the typewriter. We passed him along secretly to one another and thought of ourselves as a persecuted sect, his books our treasured riches…Nabokov was more than a writer; he was our weapon. Reading was more than a way to pass the time out of boredom, but a fight, a defense. We didn’t want to be slaves and defended the only morsel of freedom in that life—our heads.

Yet the protagonist does not understand Kovalev’s desire to share the author’s room. In his youth, Kovalev was a vocal Komsomol; now he is a churlish, money-obsessed businessman. Kovalev repeated interrogates the hotel staff to make sure that it is in fact Nabokov’s room, but when he arrives, he decides the room is too small, and moves to a larger one. Kovalev and his family drink, shop and criticize Switzerland for the duration of the trip, but tip well upon their departure. A couple of months later, the protagonist reads in the news that Kovalev has been shot dead in the streets in front of his bank—“Just a typical news story for Moscow at the time.”

The protagonist, however, does not revel in the Schadenfreude of this evening of fate. The last pages of the story turn into an address to Kovalev’s daughter, Yanochka: “What if you’re here now, reading this…I wonder what you have left in your memory about our trip…. You know, the only important thing is that there was a person for whom you were the most important being in the world.” Lachrymal perhaps, but even after the history has left him impoverished and Kovalev, the hypocrite, a dead, rich man, the protagonist empathizes with his counterpart.

The rest of the stories in Calligraphy Lesson continue in this vein. The collection consists of artfully constructed, empathetic tales of people living in the midst cyclonic time. While Shishkin’s criticized Putin in the press, he is more of humanist than a colporteur. He recognizes the failing of the Soviet regime as he recognizes those of the current regime. Among this carrion, Shishkin recovers a sense dignity of the individual that gives hope. Ultimately, this human dignity allows a breath optimism to run through these caliginous tales.

In an interview with The American Reader, Shishkin explained after communism, “[the Russian people] rebuilt the same barracks, we rebuilt the new dictatorship, we rebuilt the same regime that we used to live in.” Yet, the question that Shishkin asks in Calligraphy Lesson is the same one that the greatest Russian writers have been asking for centuries: how does one preserve human dignity in such humiliating circumstances? While the future of the nation remains unclear, Shishkin poses this question with subtlety and nuance. He counters dogmatism with humanity.

Jacob Kiernan is a doctoral student in comparative literature at NYU, and works at Bookforum. He has written for On Verge, MobyLives, and The Jordan Center. He’s currently working on his novel, Empire of Hope.