You are here: Home / Book Review / Chenoo: A Novel 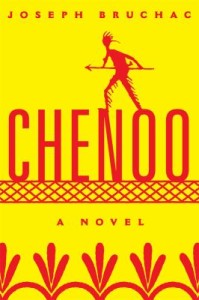 The detective novel has always been about the investigation for truth, built upon a narrative that seeks to uncover hidden meanings. Acclaimed Abenaki storyteller Joseph Bruchac’s latest work Chenoo: A Novel fits neatly within this genre. Bruchac asserts in the preface, however, that the novel’s scope extends beyond genre: “But this is not just a story about a monster. It’s also about Native American rights, about the power of tradition and story, about martial arts—all rolled up into what is ostensibly a sort of detective story.” As part of the University of Oklahoma Press series American Indian Literature and Critical Studies, the “sort of detective story” at the heart of the novel serves as an entry point for a critical examination of some of the most pressing issues facing Indigenous communities today.

In the novel’s preface, Bruchac also ruminates on Native American storytelling techniques, including his own, as well as the methods he chose while approaching the novel. About the title, Chenoo, he confesses:

It’s a creature known by several names among the Algonquin-speaking nations of the Northeast. The best-known name is probably Windigo or Wendigo, as the Ojibway and Cree and other northern peoples call it. Abenakis know it as the Kiwakw or the Chenoo. (And here I must confess I chose to use “Chenoo” in part because it is easier to pronounce in English.)

The critical reader will appreciate such an explication, but the Preface also begs an important question: Just who is this novel for?

This question could guide the entirety of the book, which begins with Jacob Jesse Neptune, “Pojdo” to his friends, a Penacook private investigator living in New York, four hundred miles from his tribal community on Abenaki Island. When he receives a mysterious phone call from his cousin Dennis, Podjo’s sense of duty leads him back to the island to protect the land he calls home. Caring for indigenous land is one of the main thematic elements guiding the narrative. As Podjo first sets out to return to his homeland, he feels his own body “whispering of danger.” From there, suspense grows.

An attack by bikers before Podjo leave New York followed by a series of mysterious brutal killings in the woods on Abenaki islands become the mysteries that loom over the text. Simultaneously, developers, government operators, and fellow Penacooks are eager to build a casino on Abenaki lands, and Podjo must join others to protect the land. Though critical issues such as sovereignty and Native American rights are introduced, they are often mentioned without further reflection. For instance, Podjo explains early in the text that “lthough it would take volumes with exceedingly small type to explain it all, it was basically about us and them. Us and Them and the Land.” Minor plot developments such as a reunion with an old love interest and intratribal conflict arise, but within the scope of increasing danger, Podjo’s worsening dreams, and the overall mounting suspense, these elements never have room to truly reach their potential. Moments that do have the potential to evolve more deeply are often cut short.

If anything keeps the reader engaged, it is Podjo himself. Staying true to one of the most classic features of American detective fiction, Podjo is a protagonist with a past, a lone avenger who is the only one able to solve the mystery. As a poet and skilled martial artist with unique dream abilities, Podjo must draw on all of his acquired knowledge to save the land and his people’s lives. Adding to his complexity, Podjo is half Indian and half white, existing between two worlds.

Part of Podjo’s charm is the self-deprecating humor he brings to all situations. When Podjo introduces readers to Dennis, he describes one thing the two friends have in common: “In college we were both Indians. By which I mean we went to Dartmouth and played football there.” Not every joke delivers a punchline, though. For instance, in the midst of an altercation with the bikers, Podjo “cleared [his] mind of everything but one thought—why is it that no one has ever found a word to rhyme with “orange”? Throughout the book, it is not clear whether lines like this offer necessary comic relief or are meant simply as distractions.

Chenoo: A Novel arrives during uncertain times as the Standing Rock Sioux Tribe continues to fight against the Dakota Access Pipeline. Recent news headlines like “New Oil Spill Contaminates Indigenous Community” permeate the Indian Country Media Network. So while scholars and students of Native American literature will certainly appreciate the book’s insight into issues indigenous communities face, Bruchac’s critiques may be too subtle in the current political climate.

Nonetheless, Chenoo: A Novel is a testament to Bruchac’s masterful storytelling abilities and that alone, makes it worth the read. The ability to combine the indigenous experience in a classic detective novel form is a welcome addition to a growing body of diverse American literature.

Mercedes Lucero is the author of the chapbook In the Garden of Broken Things (Flutter Press 2016). Her writing has appeared in The Pinch, Heavy Feather Review, and The Chicago Tribune among others. A Glimmer Train “Short Fiction Award” Finalist and Pushcart Prize nominee, find out more at www.mercedeslucero.com.