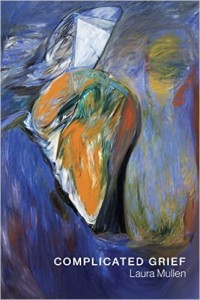 Laura Mullen’s writing, especially her emphasis on genre hybridity, urges readers to face emotional and intellectual discomfort by committing to the (perceived) challenges of reading contemporary poetry and prose.

In a publishing career spanning twenty-five years, Mullen’s books expand and experiment in style and genre classification. Her first book, The Surface, was selected by C.K. Williams to be published by University of Illinois Press as part of the 1991 National Poetry Series. Her second book, After I Was Dead(University of Georgia Press, 1999), was reissued in 2008. Subsequent books—The Tales of Horror: A Flip Book(Kelsey Street Press, 1999), Subject (University of California Press, 2005), Murmur (Futurepoem, 2007), Dark Archive (University of California Press, 2011), and Enduring Freedom: A Little Book of Mechanical Brides (Otis Books, 2012)—grew increasingly hybrid, vacillating between line breaks, aerated use of the page, and prose.

In her writing and teaching, as director of LSU’s creative writing MFA, Mullen is an important advocate of the hybrid text. Mullen stated, in a 2005 presentation on teaching the hybrid text, “Saying you hate Gertrude Stein, I tell a roomful of simmering undergraduates, is like saying you hate Saturn. An art work is a fact. It is a discovery which enlarges reality and cannot be avoided. A negative, or positive, reaction is just a step in the long process of the real work, which is the attempt to fully understand the implications of this fact. Why do we want to avoid or hurry past that work? How did security become such an unquestioned good? What’s so tremendous about comfort?”

Mullen’s eighth book, Complicated Grief, veers away from the lineated poetry of her origins entirely. This is prose, with poetic elements: the lines are terse, fragmented, jumping between ideas, alluding to other art works, and quoting from other texts. Complicated Grief is labeled “memoir/poetry,” unfolding layers of complicated questions: Is this the truth? Is the “I” the poet herself? (We might guess that the answer is mostly yes.)

In Complicated Grief, Mullen uses short, isolated prose pieces (or “installments”) to address various topics: what it feels like to be an aging woman in America, what if feels like to be a female writer, intimacy, confession, sex, the absurd ideals of romantic love, the relationship between writer and reader, the fairy tale tropes that females are fed throughout their lives, and the lifelong trauma of childhood sexual assault.

Mullen tackles a male critic in her reinterpretation of the Little Red Riding Hood fable in “Read,” positioning the narrative “I” as a female professor responding to her critic, the droll and pedantic “wolf”: “The story is not really hers at all, is it? It’s the story of the woods, in some way: the story of a sexuality defined in terms of its social usefulness—fecundity is key, of course (yawn)” (46). Mullen quotes Gertrude Stein in her final piece, “Torch Song,” and conveys one of many unifying themes: “The only thing that is different from one time to another is what is seen and what is seen depends upon how everybody is doing anything” (101). What is seen in our current culture, Mullen suggests, is the young, sexualized, female body. What is not seen is the aging body, the mature female body, the “crone,” the cost of being a female artist, or the sacrifices one must make as an intelligent, creative woman who prioritizes her art. One iteration of this “complicated grief” is the grief of being an aging woman in America, a “monstrous” being, after having spent one’s youth being relentlessly objectified and sexualized—a turn of events that most men in America hardly experience at all.

As a reviewer in Tupelo Quarterly points out, Complicated Grief is “one of the rare books that shows what it’s like to know another person by her thinking.” The disjointed, fragmentary sentences and allusions capture the narrator’s—and our own—scattered, kaleidoscopic thinking, and beautiful truths emerge. This can best be seen in “Structured Intervention / ‘fluency strategy,’” as Mullen’s topic is the limiting societal pressures single women face (to “pair up,” to not be alone, to prove one’s value via romantic relationships, etc.) and the complexity of navigating the romantic sphere. Our narrator hilariously mimes Miss Havisham, the jilted, cobweb-covered lover in Great Expectations one moment and conveys heart-wrenching realities the next: “Moving on or rather forward means to get back to the work of getting married or trying to get married, yes? Oh, there’s some lip service to the idea that I can be happy and fulfilled ‘all by myself’ but in fact you expect to see me fall in love again soon: you will be concerned if I don’t date someone, if I remain single, as if you knew (although you never say this) that if I remain on my own I will discover I don’t really matter, don’t really count” (86).

In the section titled “Trust,” Mullen writes a particularly honest and emotionally harrowing account of her childhood sexual trauma, concluding with the lines, “I’m glad I told you. Usually what ends things for me is a failure of trust” (83). This ending makes clear the intimate connection between writer and reader. Mullen has to trust us, her reader, in order to shore up the courage to tell these truths—the “truth” being signaled by the “memoir” part of this book’s classification.

That Mullen is a critically important, radical, political, feminist voice is evident in the places she has been anthologized: Civil Disobediences: Poetics and Politics in Action, Postmodern American Poetry, Hybrid: A Norton Anthology of Contemporary Poetry, Eleven More American Women Poets in the 21st Century and I’ll Drown My Book: Conceptual Writing by Women, among others.

Mullen’s is an important voice, but so is her message: We must see the value in emotional discomfort and intellectual rigor, read books that take us into that arena, and look for what grows there.

I might also add: Buy this book, read this book, and read other books by contemporary poets—especially those who live in our own city. You can find a slew of them at the first annual New Orleans Poetry Festival April 15 – 17. Show up at a reading, at a slam, at a dream workshop. See what can be seen, and consider what is not seen.

Laura Mullen is the McElveen Professor in English at Lousiana State University. She is the author of eight books. Prizes for her poetry include Ironwood’s Stanford Prize, and she has been awarded two Board of Regents ATLAS grants, a National Endowment for the Arts Fellowship and a Rona Jaffe Award, among other honors. She has had several MacDowell Fellowships and is a frequent visitor at the Summer Writing Program at the Jack Kerouac School of Disembodied Poetics at Naropa. Her work has been widely anthologized in collections from Norton, Omnidawn, and CoffeeHouse, and her poems have been set to music by composers Jason Eckardt and Nathan Davis. She is the Director of the Creative Writing program at LSU.

Kristin Sanders is a poetry editor for New Orleans Review, and author most recently ofThis is a map of their watching me.