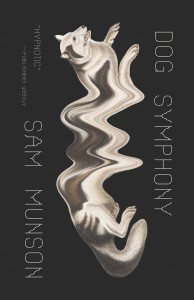 Sam Munson’s Dog Symphony is a novel about state violence and hegemony, citizenship, and how these things disintegrate human personal identity. Its protagonist, Boris Leonidovich Pasternak (named after the Russian author of Dr. Zhivago), is a North American professor of the history of prison architecture. He accepts an invitation from a respected colleague, personal friend, and one-time lover to speak at a conference in Buenos Aires. His colleague, Ana, describes Buenos Aires in her letters to him as a “shithole” and “the world’s asshole,” but Pasternak takes these judgments as hyperbole. More than anything, he is excited to see her.

When Pasternak arrives in Buenos Aires, his colleague is nowhere to be found. There is little evidence to suggest she ever existed. Moreover, he finds that after dark the streets of Buenos Aires are flooded with mysterious dogs, thousands of them, and nobody he asks about the dogs is able to offer what he deems a sufficient explanation for their presence. He spends most of the novel searching for answers, first about the disappearance of his friend and the night dogs, and later about human nature, all the while finding none. Pasternak’s narration grows wearier and less reliable as the novel’s events unfold. By the end, he variously refers to himself in third-person, directly addresses himself in second-person, and describes his thoughts and feelings in first-person.

Pasternak is a cynic from the first page. He saves himself effort by not grading his students’ work because he believes it is the right of all students to “practice their unending moronism,” which to him is distinct from “scholarly moronism.” He describes numerous people in the novel as “burgherly poltergeists,” and this term feels more and more charged each time it appears. There are many narratorial asides throughout the text which suggest that Pasternak feels he has no hope of being saved by religion, spirituality, or human kindness. These brief asides are often funny and work well to help us understand Pasternak in relation to the world around him as he describes it. They also made me close the book and scratch my chin a few times.

Allow me to state here that I know little about Argentina’s political history or its current political climate. I cannot say with the informed confidence of scholars that Munson’s portrayal of Buenos Aires is accurate, although by “accurate” I do not necessarily mean “true to ‘real’ life.”

I can say, however, that Munson’s vision of Buenos Aires in this novel is the perfect setting for an absurdist nightmare. In front of nearly every home and business Pasternak finds twin steel bowls—one filled with water, the other with meat, as offerings to the strange “night dogs.” Most of the citizens he meets appear either clueless, afraid, or both. There are officers in sky-blue uniforms everywhere and Pasternak is unable to identify their uniforms or the markings on them. The officers are cruel and stupid and are all named after German-born artists. The purpose of the officers and their unknown organization is initially unclear. Pasternak’s wealth of knowledge about prison architecture and his careful memorization of the streets of Buenos Aires prove themselves practically useless against authoritarianism. He learns that intellect, reason, and logic do not stand against the crack of the baton. The best chance one has of surviving in a society like the one in the novel (if one is to have a chance at all) is to comply, to nod silently in approval, to never ask questions. Pasternak, of course, does not do those things.

As in the best absurdist fiction, humor and violence go hand-in-hand in Dog Symphony. The narrator’s funniest quips and observations are usually delivered in the novel’s darkest, ugliest moments. This sort of juxtaposition generally works to amplify both intended effects—comedy and atrocity. Pasternak’s attitude toward the violence around him makes a slow crawl from shock to indifference. The calm with which he describes using a shovel to bash in the head of a sky-blue-clad officer is unnerving and completely absurd, but the absurd is almost always laughable, no matter how grotesque.

Munson’s writing is strong throughout the novel. These pages are littered with foreshadowing, callbacks, themes and variations, and bizarre comparisons. Particularly interesting is Munson’s use and repetition of colors to establish mood and tone, like when he finds a room at the university furnished in puce (the color of a dead, smeared flea). Sky blue, soothing and serene in most contexts, here represents state hegemony and violence. His descriptions of characters’ appearances and mannerisms are generally sharp and specific, making Pasternak’s displeasure at interacting with most of them feel real. His humor is dry, dark, and never heavy-handed. Occasionally Munson uses strange words with very specific meanings, so do not stray too far from your dictionary.

The novel ends with a somewhat predictable but nonetheless satisfying twist. It is in the final two chapters that Pasternak (whoever that is) offers some of his most thought-provoking insights, such as his assertion that the human will to live is “abstract and proleptic,” and the claim that “to exist is to enjoy an ontological purity humans can never attain. Ultimately, thoughts and observations like these are what will keep me coming back to this book. They are not always unique thoughts, but they are always well-stated and well-situated in the context of the novel, and that is enough.

Read Dog Symphony and see for yourself. Read it and let it read you. Read it and weep. Long live the whistle and baton.