You are here: Home / Book Review / Farther Away 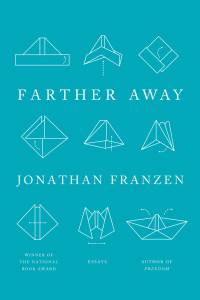 The idea that Jonathan Franzen is a man who might have fit in better half a century ago is tossed around quite often, and for good reason: he writes mammoth novels on the nuclear American family; he abhors modern technological sociality (infamously, he derided the concept of Twitter in an interview); and, he is an avid and loudly self-proclaimed birdwatcher. These topics continue in his latest nonfiction collection, Farther Away. Included here are a commencement address at Kenyon about the fetishization of cell phones (and their complication of the power of a phone call) and an essay on the destruction of songbird habitat on the Mediterranean island of Cyprus. Strangely, possibly because they are so entrenched in his cult of personality, these essays feel disingenuous, almost as if they were published because they are by Jonathan Franzen and not because they possess any meaningful agenda.

The titular essay is also problematic: in it, he describes his camping-trip-cum-escape to a small island off the coast of Chile following the death of his friend, David Foster Wallace, and his reading of Robinson Crusoe while there. It is, at first, a deeply personal and touching meditation on some difficult aspects of life. And yet, the more one sits and thinks about it, the less genuine it becomes. The essay reads as though he surely went on this trip expecting an essay out of it, and this largely collapses the piece’s sincerity. That is, can you still actually engage with something so personal as the death of your friend in a piece written for the New Yorker? Are you really escaping if it’s a small, ill-prepared camping trip you’re using as an excuse to write? It’s something that probably needed to be addressed in the essay (and, ironically, something Wallace would have homed in on immediately).

However, the bulk of the collection consists of book reviews of what he believes are under-appreciated and under-read American authors (the essay on Christina Stead’s The Man Who Loved Children is particularly good), and literary criticism. As is often the case, Franzen’s piece on his own work is accidentally fascinating; Kafka is continuously brought up as an exemplar to measure himself against, despite the obvious difference in their respective approaches in length and in realism.

The best essays in the book are also the shortest. Inserted occasionally are two- and three-page meditations on wide-ranging topics: Franzen’s experiences house-sitting; the road-trips he took as a child in the Midwest; whether the grammatical construction of using a comma before “then” is correct; and, why “Dave” Wallace was a good teacher (answer: he craved structure). This reviewer would venture to guess that these essays were initially throwaway scraps that either Franzen or his publisher only included to beef up the collection. They end up being tight, topical pieces that are light and airy in contrast to his bloated and overwrought “Farther Away.” Here’s his description of how “we,” his readers, regarded Wallace’s self-deprecations and the depressive streak in his writings: “We who were not so pathologically far out on the spectrum of self-involvement, we dwellers of the visible spectrum who could imagine how it felt to go beyond violet but were not our-selves beyond it, could see that David was wrong not to believe in his lovability and could imagine the pain of not believing in it.” This is a simple statement of empathy that winds knots around itself until it almost loses meaning.

I’ve long suspected that with a merciless editor to trim away the stranger moments of his works, Franzen could move from being one of those endlessly debated about authors to being a canonized author; Farther Away helps the argument against canonization. That is not to say the collection is bad or even mediocre. But the glimpses one gets into the working mind of Franzen are perhaps not the ones he intended.