You are here: Home / Book Review / Foucault, in Winter, in the Linnaeus Garden 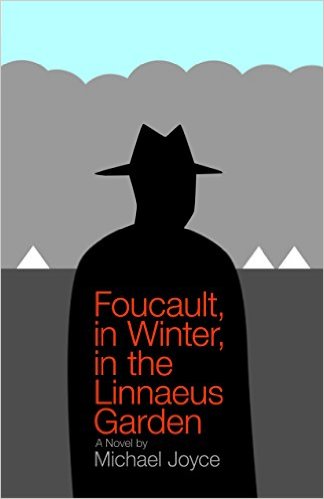 Michael Joyce’s new epistolary novel, Foucault, in Winter, in the Linnaeus Garden, creates an alternate history of the philosopher by compiling fictional letters, sent and unsent, from Michel Foucault to his lover, colleagues, and “Gabrielle”, a newly acquainted muse with whom he has become intellectually enamored. Although Joyce calls this novel a “fantasy” in both his preface and afternote, the nomenclature sells him short: this is a marvelous work of authorial exploration, buzzing with ideas about writing, philosophy and authenticity. Predominantly written in a flickering hybrid of French and English, the text is an overwhelming outpouring of unfiltered love, anxiety, and intellect. The letters feel ink-penned and wax-sealed: genuine, not just believable but authentic in spirit.

With a devastating, parenthetical “(unsent)” before some of the longest, most heartfelt letters, Joyce effortlessly conveys the emotional difficulties of being alone with one’s thoughts. Foucault spent a long winter at the University of Uppsala, Sweden in 1956 serving as Director of the Maison de France while his lover, the composer Jean Barraqué, remained in Paris. Barraqué is the intended recipient of a handful of invitational letters, but Foucault grows increasingly anxious and philosophically ambitious after meeting the enigmatic Gabrielle in a pâtisserie. Foucault learns of her troubled past and her dreams of an edenic future; she tells him of a “gay paradise” in Brazil where “it is Carnival there, now and ever, maintenant et toujours.” Foucault, alone, is consumed by this idea of an alternate future and obsesses over Gabrielle as if she could possibly correct everything unbalanced and unresolved in his life. “I have come to see that my whole life here is haunted par une immanence qui attend en cachette,” he writes, “another life lurking there just beyond the door to the study where I write or even as far away as Rio de Janeiro.” Foucault obsesses over this “immanence” and recedes further into his own daydreams, unwittingly jeopardizing the existent (but geographically challenged) relationships in his life.

The “fantasy” element of Foucault, in Winter quickly dissolves into an unnecessary concern: true or not, the sentiment is real and the social disconnect that Foucault (the character) suffers demands more empathy than fact-checking. And even if they were factual, one could make a fascinating argument that a letter becomes “real” upon its receipt, that the connection between sender and addressee is integral to the concept. These letters exist somewhere else in the ether, caught between fact and fiction just as they often are between sender and recipient.

In one letter, Foucault writes to Gabrielle about how enlivened he’s been since meeting her and learning of her life in Sweden. It’s a beautiful consideration and profoundly similar to the experience of reading Foucault, in Winter:

This is an emotional, transportive novel that recalls a time of literary passion. It is a work that begs to be read aloud, regardless of its challenging polylinguality; to be heard, felt and absorbed.

While the “highbrow French creole” of the novel may appear impenetrable to non-native speakers, the entire book hinges upon the challenge of navigating these cognitive unknowns. It is also not just French that fogs this prose: umlauts of both German and Swedish origin riddle its pages, and Joyce delves into academic “languages” of music theory, science, classics, and philosophy with equal aplomb. Even a native French speaker might not be able to translate the idea of an unresolved seventh, a reference to Hippolyta, or to know what it means to hear Glenn Gould humming through the variations.

Joyce forces his readers to remain between knowledge and incomprehension, and proves that language and communication are not binary concepts of either knowing what something means or not knowing at all.

Joyce forces his readers to remain between knowledge and incomprehension, and proves that language and communication are not binary concepts of either knowing what something means or not knowing at all. He shows us inference, feeling, and reveals that we can float between these two seemingly polar opposites and shape an understanding from their disapparated parts. We look for clues around a French passage and find cognates in its syntax. “Answers are rare… in anything,” Foucault writes in one letter, and while this intuitive practice may not form the most factual ideas, we’ve given shape to something powerful in our minds.

Glenn Gould buzzes along on the gramophone while playing Bach—or is that the cyclotron in the distance, separating isotopes? “Not very far from here,” Joyce writes, “they spin the world until it becomes tellement vertigineux, so dizzy that its very matter splits apart into sparks that only show themselves as traces in the dark.” This split and the space between constants enrapture Foucault, and while we busy ourselves applying this concept to the form of this spellbinding novel, Joyce secretly develops the genesis of Foucault’s later theories. Towards the end of the novel Foucault’s obsession with Gabrielle and his longing for Jean culminate into a swarm of what may be the first signs of the interstitial gender theory that would later form his expansive History of Sexuality:

It is not lice that crawl over me, mais un essaim d’abeilles, all of them humming their low winter dirge. Ce n’est pas mes organs sexuels qu’ils attaquent, mais mon sexe. They unman me and leave me longing for my ghost sister, someone who can clasp my heart and make this awful noise cease.

Foucault and Gabrielle’s relationship peaks at the end of the novel with a penultimate outing that slyly takes place off-stage, between letters. Foucault reminisces afterwards how “the world did stop for an instance, as did my heart, as you struggled to explain l’aura qui entoure ce Bonheur, la liminalité….“ Gabrielle felt she “did not belong there” and “should not feel so happy”; she “wanted to remain suspended forever, outside all categories.”

The entire novel exists in this liminality, in the expansiveness between (and beyond) two theoretical or corporeal bodies. Whether traversing the conceptual chasms of authorial veracity, geographic distance, or gender and sexuality, “all of these seem to me languages that despite our pain we must retrieve and conserve in our deepest hearts.” Michael Joyce’s deeply affecting prose does exactly this: Foucault, in Winter, in the Linnaeus Garden floats between ideas and language, madness and civilization, and, in the process, finds emotional gravity.

Jeff Alford is a critic and book collector based in Brooklyn and is also the writer of the rare books and small press blog www.theoxenofthesun.com.