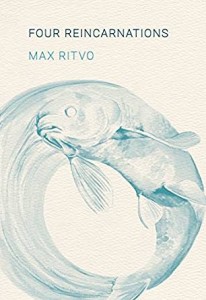 At just twenty-five, Max Ritvo leaves behind a small but incredibly accomplished body of work in his debut collection, Four Reincarnations. Ritvo fought a long battle with Ewing’s Sarcoma, passing away in 2016, a month before the book’s publication. Though he did not get to see the published edition, his legacy lives on in this extraordinary collection filled with distilled emotion and disquieting juxtaposition. We feel the urgency in his words: “thank God for the future, / where we levitate.” Ritvo’s poems truly levitate, raising us up to his challenge to live life with joy, curiosity, and mourning, always looking toward the possibility for a future where we can “open [ourselves] to love / and close again, open.”

Ritvo is a master of evocative poetic questioning that pierces through his electric language and floats above his poems. The book opens with the question, “The bed is on fire, and are you laughing?” His juxtaposition of playfulness and danger characterizes his voice throughout the collection, often leaving us to wonder which side of the poem he is leaning towards in each small moment: the celebration of life or the intimacy of mortality? His voice, though uniquely his own, is reminiscent of Louise Glück (notably his former professor at Yale), always striving for loftiness through minimalism. In her most recent collection, Faithful and Virtuous Night, Glück asks, “Restless, are you restless?” Whether purposeful or not, Ritvo seems to answer this call, echoing the loneliness and yearning of the speaker with “not sleeping, for who can sleep / with the promise of a world beyond the door?”

The first poem, “Living It Up,” presents Ritvo’s unwavering obsessions with death, possibility, loss, and desire through impassioned rhetoric and sharp imagery. The poem is a dance of short-lined couplets, circling around the speaker’s divided self and cyclical suffering. The couplets offer enough white space for the reader to come up for air throughout the poem, yet the language itself is made breathless by each skillfully enjambed line, such as “but they’re afraid if they break / their spiral, they will never / be able to hold anyone.” The speaker addresses the beloved with blunt earnestness as their lives begin to uncoil like the springs of their mattress, calling out, “I wish you would let me know / how difficult it is to love me.” As the air surrounds the speaker, it interweaves within the breaking bed and squeezes itself into the speaker’s body, only to split at the end—sabotaging the speaker’s lifeline to the living and his beloved. While so many of his poems blend abandonment with desire, “Living It Up” best represents the book and its earnest need to examine one’s place in the world.

Elsewhere in the first section, Ritvo continues the theme of the divided self and its continual suffering, complicating the speaker’s desire for life through torture and disease. In “Poem for My Litter,” the speaker’s genes—his most tangible self—are split and inserted into lab mice in the hopes of a possible cure. He clinically states “We give / the mice poisons I might, in the future, want / for myself.”  The doctor and the speaker are equally implicated in the poisoning of life in the hopes of gaining new life, however brief. The speaker’s matter-of-fact tone does not lessen the poem’s vulnerability, though, as the speaker seems to break the fourth wall by naming all his mice “Max,” unveiling the poet in the stillness of the research lab where truth is revealed and probed. As the mice continually die, the speaker states, “I hope, Maxes, some good in you is of me.” This transferring of the self into animal suggests the speaker’s return to the accepted loss of himself—hoping that his imprints remain in the living after he is gone: an elegy for his own possibility. The poem ends on a note of unnerving stillness as the speaker says, “And if a whole lot / of nothing happens to you, Maxes, that’s peace. / Which is what we want. Trust me.” And, somehow, both the mice and the reader begin to desire this intimacy with death and come to trust the speaker’s vulnerability unflinchingly.

While the first section explores a quiet yearning for the future, the theme of diminishing space and time emerges in sections three and four, cruelly transforming earlier possibility into imminent sorrow through the shifting of light. In “Poem Set in the Day and in the Night,” the speaker is split between both spider and shadow until “suddenly there’s a new order / to the life he never knew was shared.” Violent language shrinks the speaker’s internal space with the shifting stanzas of couplets and tercets in lines such as “the sun is wide, like an eye cut open, / and it blasts the man so that his whole shadow / scuttles beneath his belly.”  Within a string of couplets, this three-lined stanza unbalances the reader much like the unbalancing of the speaker and his shared space with darkness even through the day’s harsh light. The closest thing to the speaker (his shadow) creeps away from him and hides beneath his body, a reminder of the danger of openness or the lack thereof. The violence continues throughout the couplets as “A sweet face / rips in half and / you pass through it / like a curtain.”  The speaker is caught between the violence of night and day, monster and man, and calls out “But what night isn’t like this?” continuing the cyclical nature of the shifting between light and dark: a resignation to the imbalance of sorrow. The poem ends on an unsettling acceptance of the two selves in one, stating, “when you weep, sorrow comes clean out. / Hello again, you say. Hello again.”

Ritvo’s complex longing for—or reaching toward—the future carries throughout his collection as he describes chemotherapy and hospitals with joyous movement, balancing impending loss with desire. His sparse language complicates the barrier between the daily, living world and his imagined metaphysical realm. In “Black Bulls,” Ritvo writes, “I am so sorry that you have come to this mind of mine,” for Ritvo’s world is one of bleak laughter and blunt realities. Yet the reader cannot help but be grateful to be allowed into a mind filled with charged language and erotic questioning. Four Reincarnations unfastens us “like an eye cut open” and allows us to see into our past and future selves, as they deal (as they must!) with the twinned complexities of lived identity and mortality.

Elise Lakey was born in Atlanta, Georgia, and currently resides in Denver where she studies creative writing at the University of Colorado. She is an associate poetry editor at Copper Nickel and tweets at @eliselakey.