You are here: Home / Book Review / from 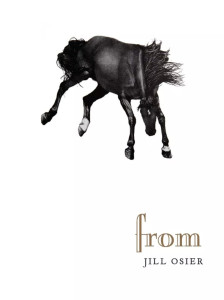 Jill Osier’s slim new collection from begins to work on us before even we read a word. Against a stark white background, a horse bucks on the cover. The drawing catches it mid-leap, suspended. Out of context, it is difficult to tell whether the horse is playful or angry, but its bold, black outline leaves an impression of concentrated power.

The title is an impressive statement of minimalism as well: it takes the humblest of prepositions and asks that it stand for all the book contains. Nothing so audacious as Origin Story or Where I’m Coming From, titles which could have served with equal veracity, but merely from.

The same restraint echoes in the tight, compact verses of the poems themselves. Osier takes us back to scenes of childhood—the family dinner table, softball games, landscapes and settings for childhood games—with simple, severe directives that, like the cover’s horse, blaze with power. Our provenance may be simple, Osier indicates, but it is indelible.

“Small Town,” the first poem in from, begins “Listen.” What follows is a series of causal explanations, stemming from an initial outlandish statement. “Listen,” she says. “The rug is wet because/ I stood there:”

Because
It started pouring. Because
Your door was open and I was
Under a tree. Because….

The speaker responds as if to a series of accusatory questions or an interrogation. Her reasoning unspools rapidly as every seemingly simple statement requires further explication. She walks us through what she knows about her interlocutor—out bowling, door never locked—calling to mind how much we know about those we live closely to. How in a small town one’s comings and goings are known by all and how that knowledge can be both comforting and claustrophobic. It reminds us, too, of the small invasions that can come with such knowledge.

The horse evoked in the cover art first appears in the poems themselves midway through the book in “Of Unsent Letters, One.” In this imagined epistle, we again enter into a half-conjured conversation with an unnamed other. The speaker recounts changes in the local landscape: the property adjoining the speaker’s house has been bought, and the new owner pastures his horses there. As with the addressee, these horses are familiar, near but untouchable.

After focusing on this change, the speaker zooms out to catalog where other horses may be found, including the edge of town on the way out to the cemetery—giving us, perhaps, an idea of why this letter hasn’t been (or can’t be) sent. She moves from a position of resentment, missing the original layout of the field behind her house, to being fully occupied with watching these three horses, “perfect and restful.”

…I go out
while their backs have the moon on them,
the air thick, my feet wet with alfalfa. At night
they are the darkest shadows in the field.

Some elements here are reminiscent of Jack Gilbert’s use of animals and objects in The Great Fires. In “The Forgotten Dialect of the Heart,” Gilbert says, “How astonishing it is that language can almost mean,/and frightening that it does not quite…I dream of lost/vocabularies that might express some of what/we no longer can.” The examples he provides of these vocabularies are taken from Etruscan texts and Sumerian tablets, usually translated as business records—goats exchanged, shiploads of thuya, amber.

Gilbert begins “Finding Something” with “I say moon is horses in the tempered dark,/because horse is the closest I can get to it.” Osier, too, is asking a lot of the landscape and its occupants. To stand for all that which cannot be said.

A few pages later, we get “The Horses are Fighting.” Again, we’re faced with small groupings of animals against a backdrop of a rolling country landscape. Osier says of a group of horses, “They stand scattered and not facing each other,” before likening them first to “black-eyed/Susans lining the highway” then to “sisters/angry in some small kitchen.”

In the first instance, they are objects of a kind, spaced out irregularly, facing a path that others cross. In the second option, they are kin, united by blood and confined in a tight space, who, while still connected, ignore or avoid each other. These sisters bring us back to the idea of from, of these country roads and history from which we all arrive. We are given a sense of relationship between the sisters and wonder what they might have done to anger each other.

In the second stanza we are given the image of goats who traipse across a tall meadow, following each other. Again, we have a herd of animals, but these, rather than standing still, are a linked group in the process of traversing a space. Then one makes a decision and breaks from the group, shattering the group’s unity.

In the third and final stanza, we are brought into the speaker’s world:

But how elegant animals seem
these weeks after your funeral, each
quiet despite a whole field, content
with any fresh mouthful.

These stolid animals stand in contrast to the speaker; they are content and have no sense of loss or tragedy. The speaker notes this with envy. After the deft summoning of these animals against their pastoral landscape, it is almost a shock to be reminded that they’re seen within the context of loss. With the speaker, we relive that moment of forgetting one’s cares for a second, only to have them forcefully brought back.

The insouciance of the animals reminds us of the attraction of writing about where one is from, one’s early years. At that time, one did not know enough of the wider world to want anything beyond one’s own family, the boundaries of one’s town, and the immediate pleasures then present. At this time too, everything was happening for the first time. We did not know that we could survive a first love; we had nothing to compare that loss to. In writing about youthful experiences though, the cast of our current mindset always impedes; we bring our current framework, with its disillusion, its nostalgia and desire, to those reflections.

In “Shell Rock Song,” Osier speaks more plainly to the framework of this small collection. She tells us “It’s less important why/ and more important where,” speaking to the importance of place in sculpting the self. In this poem, the speaker recalls one of her familiar childhood haunts: a river from which she’d scoop rocks to bring home, only to find they’d lost their shine after drying in her pockets. Though this river has been the setting for several of the poems in the collection, we see it here in allegorical form: that flow of time out of which we may pluck particular moments, trying to hold on to them.

Back in the present, the speaker returns to that river, finding a flock of geese “held in the glare of winter sun.” Again, a motionless group of animals, related by proximity and backdrop, captures the speaker’s attention. The speaker says:

Again I tried to take
The shape of solitude
At the side of the river.

Again I stood motionless,
Yet they were more still.
I stayed, adoring them,

Over an hour in the cold,
Waiting, I think,
For them to love me.

Then I walked home.

The speaker’s interaction with the river and its occupants has changed. There is no physical interaction but rather a rapt contemplation. She hopes to compel some fellow feeling in these animals, but they are immovable, unapproachable. The speaker’s sense of otherness and accompanying isolation, when facing these resonant scenes, is acknowledged here openly. Over the course of the collection, the speaker has reviewed many of those formative moments in her life not only with the more discerning gaze of adulthood but also within a new context of loss.

As readers, we’ve followed the speaker on a guided tour of her town, noting the scenes of seminal moments from her childhood. With her, we can feel that disconnection from her place of origin, though we retain the ability to note its beauty and power. We watch the landscape change, beloved figures disappear, and in that sad metamorphosis we find a depiction of our own changeable froms.

Aran Donovan lives in New Orleans. Her poetry has recently appeared in Barnstorm Journal, Permafrost, The Common, and The Journal and is forthcoming in Big Lucks, The Collapsar, and Peauxdunque Review. She tweets sporadically @barelymarigny.