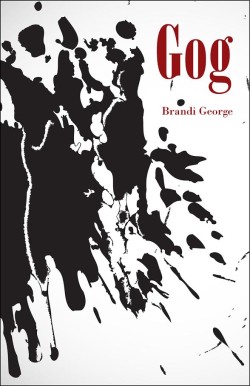 Gut-wrenching and phantasmagoric, Brandi George’s first full-length poetry collection, Gog, articulates the experience of a young female growing up in an oppressive contemporary rural environment. These poems ask the most fundamental of questions: “Why are some of us disposable.” George dives right into the complicated and often painful cross-section between gender and class; her voice is courageously honest and impressively unfaltering.

Gog is split up into four sections: Pretty Banshee, Red Birds, Possessed Girls, and Lily and Gog which illustrate the great tension of the book: intense imagination in the face of gender oppression in a working class world. The poems in Pretty Banshee set a stage of family history and domestic violence. As the reader progresses through the book, the poems become more vibrant and dreamlike. Even John Keats looms over the second-half of Gog as a dark spectral force: “Keats surges / through the eyes of mounted bucks / on the walls of the room where / I hide under comforters (hide with me).”

George is the master of her poetic machinery. Poems like “Grace,” “Poems Burnt in a Trash Pit,” “Lily and Gog,” “Eleven Eleven” and “Cult of the Dryad” show off her rhetorical skills: biblical, classical, cosmic and pop culture references mix into a collage of resistance; these references allow the speaker to reconstruct the past through her own creative measures. George even utilizes a bit of dark humor in “Post-Exorcism Lunchroom Fugue”

It’s the scribbles on my face before school,

on my chest, the oil crosses Cora drew

on the mirror banishing me from the trapeze

This poem is a wonderfully constructed trap that springs nicely in the penultimate line.

The most impressive feature of Gog is George’s refusal to sentimentalize. She exposes female hardship at its most brutal: rape, abortion, abuse and exorcism. The stand-out example is “Crone-Ballad”:

When my great-grandma’s husband drove by with another woman,

she punched him in the face.

When her daughter married a rapist,

she punched him in the face.

When her son slept with her other son’s wife, then slid

his motorcycle under a semi truck,

she wore a red dress to his wake.

When her husband kicked her pregnant belly,

she earthed the stillborn in a shoebox.

she earthed the stillborn in a shoebox.

After she named her daughter Sharon Rose and dug an unmarked grave,

she washed the livings’ socks.

The great-grandma functions as a matriarchal historical marker/mentor, a woman hardened by the brutalities of her environment; she performs chores while also dealing with abuse, pain, and miscarriage. The final section of the poem is the most poignant: “The last words of Mary Warren Toth Seibert Prochaska: // Lousy cocksuckers.”

With “Crone-Ballad” at the helm of Gog, the reader discovers in the following poems that the speaker has absorbed her great-grandma’s hard-nosed qualities. In “The Shadow of my Black Dress” which begins with a Nietzsche quote, the speaker tells her mother:

Just so you know:

if that man you brought

home from the bar takes

off his hat, I’ll load my rifle. And Angel

of Death: blow me.

She embraces nihilism again in “Waiting for the Results”: “You know me, / Lord . . .  I’m ready for / annihilation.”  These nihilistic feelings are compelling; they reveal a speaker who knows how the cards are stacked: the women in her life are swallowed up by the abyss, but not without fighting it first. She must do the same.

The representation of men in Gog is traumatizing, particularly the speaker’s father: a gun-lover who shoots any creature he happens upon: “There’s still a chance / he’ll shoot the cats from kitchen windows, so I / wait with the hose.”  However, in “Father Teaches Me How to Kill a Man,” violence is passed on to the speaker: “We practice like dancers. / Then he gives me a knife, says: / Cut upwards,” The irony is captivating: a man who indulges in slaughtering innocent creatures takes the time to educate his teenage daughter in the bloodlust art of self-defense.

Another way George refuses sentiment is through her portrayal of rural and working class life. Images throughout Gog are humanizing and captivating: snapping string beans, old men drinking beer, cleaning the dirt from beneath fingernails.  The most effective moment occurs in “Why the Working Class Won’t Save Us.” The poem begins with a misogynistic quote from Rush Limbaugh and takes off from there:

Goddess of the Dollar Menu, you know a 6’ tall

called me a dyke, then spit in my face. When my stepfather’s guru,

and a “prostitute,” I think of corsets,

widening and the infant’s brain-burst

in my family has been raped.

Violence against women is reinforced through political pundit “gurus” like Rush Limbaugh. In this instance, the speaker’s stepfather is especially apt to listen to Limbaugh due to his illiteracy: “He worked third shift / at Sealed Power on a steel ring assembly line, said, ‘I’ve read / two books—hated both.’”  George understands that oppression is a vicious cycle perpetuated by a lack of resources and fueled by abusive rhetoric. The working class in Gog aren’t simple-minded, salt-of-the-earth folks; they are horribly disenfranchised and misled politically. They can’t save anyone because they aren’t equipped with the tools to save themselves.

Gog is a lyrical, hard-hitting first book. Brandi George’s courageous balancing act between the real and the fantastical, empowerment in the midst of gender and class oppression, and rhetorical instincts turns each poem into an emotionally and technically-sound marvel. Gog embodies the beauty and terror of survival with line after line that proclaims: “that is how we feed / the ones we love, without a sound and when we can.”

Andrea Syzdek is an MFA candidate in poetry at the University of Houston, and a 2016 Poetry at Round Top Fellow. Her reviews have appeared or are forthcoming at Colorado Review, Gulf Coast, and Kenyon Review Online. Her poetry appears in Concho River Review. Find out more at www.andreasyzdek.com.