You are here: Home / Book Review / Home is What Divides Us: A review of Vanessa Blakeslee’s novel Juventud 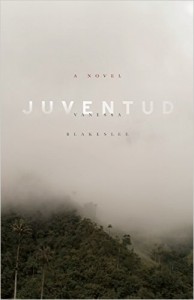 Over the past year, a number of high-profile novels have moved beyond American insularity to engage questions of social justice. Dinaw Mengestu’s All Our Names (2014) follows a former revolutionary from a circa-1960s Uganda rife with civil war to a racially intolerant Midwest US. Throughout, Mengestu is quick to remind readers of the various international and historical stressors that inform Uganda’s turmoil. As one  character points out: “No one needs to learn how to kill, but it took the foreigners who came to Africa to show us that it meant nothing to do so.”

Similarly, Denis Johnson’s The Laughing Monsters (2014) trails a Danish-American spy along the chaotic backlots of post-9/11 Sierra Leone and Congo, countries which he depicts as pay dirt for the intelligence industry. Johnson’s narrator describes Central Africa as a “land of chaos, despair.”  The area’s instability makes it prime real estate for rakish exploitation for Roland Nair and Michael Adriko, the novel’s protagonists. Both Mengestu and Johnson map systemic dysfunctions in Africa, though for very different aims. Mengestu hints at the emancipatory potentials of radicalism, while Johnson’s characters locate cynical glee in their combined exploitation of civil chaos.

Vanessa Blakeslee’s debut novel Juventud  leaves behind the United States for the politically turbulent Santiago de Cali (Cali) in Colombia. Like Mengestu, Blakeslee is keenly aware of social injustice and exploitation, and the novel paints a refreshingly complex portrait of civil strife in Colombia. This novel is fiercely cosmopolitan, and at times, feels like equal parts travelogue, political thriller, and bildungsroman. Stopovers include Southern Florida, Northern California, Costa Rica, and Israel.

No one would’ve blamed the Orlando-based Blakeslee if she’d attempted a domestic “Great American Novel.” Her short fiction collection Train Shots focuses primarily on American characters in American locales. The collection won Blakeslee the 2014 IPPY Gold Medal in Short Fiction and made the long list for the 2014 Frank O’Connor International Short Story Award. The film rights have even been optioned by producer/director Hannah Beth King. In short, she didn’t have to reinvent her ambitions for her debut novel, but Blakeslee isn’t one to rest on her writerly laurels.

Unlike Johnson’s and Mengestu’s recent work, Juventud invokes a young female protagonist. In contrast to Mengestu’s righteous narrator, or Johnson’s treasonous spy narrator, Blakeslee’s fifteen-year-old Mercedes is naïve, pampered, and earnest when it comes to her lack of romantic experience. Mercedes articulates a vulnerability that we don’t often find in novels with high political stakes: “That was my luck . . . almost sixteen and still no boyfriend.” One of the more privileged girls in Cali, Mercedes broods under the watch of her oppressive, yet well-meaning Papi, a farmer of sugarcane, alpacas, and more. Their household employs a maid, and Mercedes even has a driver (Fidel) to ferry her to school and through the streets of Cali, where there’s friction among indigents (“desplazados”), the upper class (Mercedes’ father), and the cartels. In fact, Mercedes witnesses gunplay in the very first chapter. Mercedes’ privileged lifestyle creates conflict as she’s forced to confront the juxtaposition between her own security and the unmet needs of her country people.

Socioeconomic disparity between those with means and those without seems to be a large part of what compels Blakeslee as a storyteller. Very early on, the novel’s primary characters begin drawing hard lines in Cali’s political sands. On the subject of desplazados, Mercedes’ father states, “The poor breed more poor, while the rich feed them.”  Like any salt-worthy cynic, Mercedes’ Papi complicates his stance by blessing the desplazados with sporadic gestures of charity.

Papi’s hardline conservatism sets up intrigue for radical twins Manuel and Emilio, both of whom are outspokenly leftist and tightly bound to the church Papi despises. Think of Manuel as Colombian John Mayer. He’s got mad good looks, he’s out for social justice, and he knows how to make a guitar sing. An unyielding hunger for naïve, romantic love is at the heart of Juventud, whose title translates roughly to “youth.” Mercedes doesn’t subscribe to “hookup culture,” so when she falls Manuel or one of the novel’s other love interests, it matters. More seasoned readers may find that Mercedes’ infatuations tend to smack just a little too sweetly, given that it’s practically anathema within the dictates of literary fiction to depict characters engaging in blissful, problem-free sex. (The audacity!). Though Blakeslee’s prose demonstrates a great deal of restraint, there’s still high incidence of “enjoyment,” an unusual element in politically-inflected fiction. Some may even find that Blakeslee’s character seems downright radical in her efforts to resist the kinds of romantic cynicism we find developing alongside services like Tinder. This novel’s capacity for naïve love is what allows it to depart from the interests of a novel like The Laughing Monsters. At its core, Juventud wants to function as a kind of romantic odyssey for Mercedes.

My one overriding criticism of Juventud is that the very lofty ambitions open the door for a few loose ends, and not just on the plot level. Blakeslee tells a coming-of-age story while tracing a complex portrait of tragic drug-related strife in Colombia; as a result, the stakes for a powerful ending sit on a fairly high shelf. As a bildungsroman, Juventud is highly successful in closing its own circles, though readers who favor tidier resolutions may beg to differ. Mercedes flees her homeland during Part I and I’m probably not spoiling anyone’s surprise by revealing that, like Odysseus, she will eventually return during Part II. This return feels a bit rushed, pink in the middle. The narrative’s political arc also feels slightly out of pace in the second half. Tensions in Colombia have become more relaxed in Mercedes’ absence, but unlike the protagonists of Mengestu’s or Johnson’s work, Blakeslee’s protagonist is curiously removed from this development.

Minor qualms aside, few novels demonstrate the sheer ambition of Juventud. Blakeslee’s vision of Colombia is convincing and well-researched. Drawing inspiration from Junot Díaz, perhaps, she factors in italicized Spanish language here and there, allowing those who aren’t fluent a partial immersion. Many of Blakeslee’s descriptions feel sharp and authoritative, such as in the following passage, during which Mercedes and Manuel walk through a Colombian plaza:

In silence we wove through the sidewalk traffic, past a market of farmers lugging  produce and clucking chickens, and a coffee stall, where a giant roaster stirred and groaned, the beans shiny as rosary beads.

In the case of Denis Johnson, an emphasis on signal noise and misinformation makes it difficult to determine what message we’re to glean from Central Africa’s disorder. His main characters, Nair and Adriko, seem content with their ghoulish exploits, but it’s unlikely that readers will  find either  very sympathetic. Juventud’s pulse beats a warmer cadence. Cali is dangerous at times, but more often, we see bucolic landscapes and austere churches. Like Mengestu, Blakeslee aims a somewhat incriminatory finger at those Americans who look down their noses at Colombia’s cartel problems. As Mercedes’ Uncle Charlie tells it, “The fighting [in Colombia] will go on, fed as it is by the gringo appetite for drugs . . . until we have killed each other, every last one.” Here, he points out that cartel violence is a terribly complex problem involving a litany of external forces. This story demands awareness on the reader’s part, but that’s not to say that the novel becomes didactic or serves the function of a leftist mouthpiece. While Johnson is largely interested in his setting’s capacity for dehumanization, Blakeslee steers us through Colombia’s calamities with a compassionate hand.

Blakeslee’s 2015-2016 book tour—which begins in September—caters mostly to Florida residents, though she does plan to reach Chicago, New York, and various other locations in the northeast. In keeping with her progressive approach to writing, Blakeslee is using an Indiegogo website to help raise funds for the tour. I, for one, hope that she generates enough to bring the tour to Cali.

In 2015, Nickalus Rupert received an MFA from the University of Central Florida. Currently, he is a first-year PhD student at the University of Southern Mississippi. His fiction appears in PANK, The Pinch, Tin House’s The Open Bar, WhiskeyPaper, Night Train, and elsewhere. Find him on twitter at @nlrupert.