You are here: Home / Book Review / How Literature Saved My Life 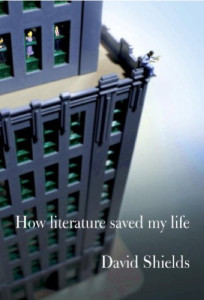 David Shields opens his fantastic new work, How Literature Saved My Life, in a feint of over-sharing. But he does this to lure us into the tart funhouse that is his project. If the Oprah memoir is characterized by the overwrought emotional distress of a dead parent, spouse or child, followed by epiphanies of searching, closure and enlightened resolve, the Shields memoir wallows with grim amusement in the muck of unresolved grudges, insoluble cosmic doubts and dashed hopes about the ability of art to give life real meaning.

“My father throughout his adult life was manic-depressive and constantly checking himself in to mental hospitals, where he craved and received dozens of electroshock therapy treatments,” writes Shields in an opening salvo. “I’ll never forget his running back and forth in the living room and repeating, ‘I need the juice’ while my third-grade friends and I tried to play indoor miniature golf.” In the world of Oprah, the old man would have expired when Shields was just starting high school and young David would be left to grapple with the guilt from loathing the Catskills swinger. In the Shields memoir, the geezer endures in rude health to the age of ninety-eight, all the while laying siege to his son. “Too bad you didn’t become a pro tennis player. You had some real talent.”

Now that his old man has exited stage right, Shields has found a new foil for his riffs: George W. Bush, safely out of office and able to disappear into the banalities of the small-town, mid-century Texas dreamlife that informs his entire existence. Bush is an alluring enigma for Shields because Bush is a man comfortable in his own skin and seems able, like Shield’s father, to surf existential angst with aplomb and blithe indifference. He offers an anecdote of Bush having fun with his fellow travelers in the first-class section of a trans-Pacific flight. “He was a great guy, very gregarious.” But more importantly: “Bush simply understands how the world now works; with his friendly manner he gets what he wants and he’s at peace with everything.”

But Bush is a rare bird. And Shields knows his own flock of bookish people are not an easy-living breed and deserve to have their feathers ruffled. Shields takes pains to note that even though he was a conniving nebbish using his interest in literature as a way to bag chicks (and rifle through a young lady’s diary to plot his courtship and conquest), he still knew how to have a proper shag. In one section, he reminisces in blue detail about a certain lady whose quest in life seemed “to burn images of herself into my retina forever” via a private performance art of pornographic excess. “Humankind cannot bear very much reality,” he concludes, perhaps as tacit advice that it is better to settle on a nice lady, roomy through the hips and with a few hangups between the sheets, rather than a shapely semen-sipping kook who could take you down for good. Lindsay Lohan will kill you.

Shields is capable of surprisingly moving moments, always with that tangy note that existentialists savor. “Karen Shabetai, dead at forty-four.” Dead from cancer. Shields remembers the woman as an exemplary teacher and a true believer in culture as reliable constant. “It’s important to remind myself that Karen was sweet but not too sweet.” This little entry, at the equator of the book, captures both the dignity of this woman and yet also the strange pathos of the academy and its various games of futility along with the melancholy of middle life. In an earlier entry, Shields discuss the radio advice columnist Delilah, whose audience is primarily single ladies for whom men are both a lure and a snare. No other writer working in the study of nonfiction has Shields’ ability to get on the wavelength of pathos that informs the lives of both sexes in a dissonant age of lost souls and wayward collective consciousness.

Shields fetishizes the outsider but only on an existential level. Although he often mentions his Jewishness, he’s not interested in the posturing of, say, Leonard Cohen or Bob Dylan or even Woody Allen to win the approval of WASPs and the treasures of their kingdom, including their chicks. For Shields, literature and writing supersede and subsume all granular tribal concerns and incursions. “Pure love, I’ve found, is pure language. Feeling becomes sound.” As a lifelong stutterer, Shields has fought to make his peace with speech through mastery of writing. And yet his handicap has given him an Iago cunning that allows him to instantly read body language and physical presence.

Shields grew up in “post-hippie 70’s” suburban San Francisco but he has never really explored that world and all its spooky, echoing vibrations of defeat, violence, excess and ambition—Harvey Milk, Jim Jones, Steve Jobs. He categorically rejects his own parent’s agitprop idealism as a happy lie obscuring the bleak life he lived in the burbs. Shields appears to have no serious interest in the local as the principle staging ground for a viable stance of existence, engaging the Other and making sense of death. Shields may talk about hip-hop but you won’t find him on the turntables in a club anytime soon. He is disconnected and remote, as he asserts we all are. Texts are his place, his terroir.

Shields is also the product of that crucial moment in the social sciences when ethnographic and documentary texts were shadowed by back story and indiscrete rumor. Malinowski’s diaries put paid to old school anthropology monographs. In addition, Tom Wolfe’s 1989 manifesto in support of the social realist novel now seems painfully valedictorian. Self-reflection or self-involvement rules fiction and nonfiction now and Shields is cheer captain for the steamroller. He talks about his love of Sherman’s March, a personal film essay about everything except Sherman’s march to Atlanta. At one point, because his act foregrounds the collage/performative aspects of postmodern literature, Shields tries to make sense of David Foster Wallace. For me, Wallace was an underwhelming, even troubling, writer who tried to snow you with excess, what James Wood called hysterical realism. To enjoy a Picasso, you don’t need a single word of artspeak to “get into it.” But with Wallace, there’s an entire industry of explanation and excuse-making about his writing, as if he’s the tragic Trojan Horse for the whole MFA magic realism swindle that emerged during his heyday from places like Syracuse or Iowa where Shields earned his own credentials. Shields rescues Wallace from the Wallace factory by discussing one of the idol’s best-known essays, “Shipping Out,” a New Journalism performance piece in which DFW is “a big American baby with insatiable appetites and needs.” DFW, with his ceaseless asides, qualifications, and footnotes, is trying to obliterate the idea of a coherent, self-contained consciousness, Shields argues. In doing so, Wallace smashes the frozen ice that separates us.

At the same time, Shields embraces a good offense is a good defense strategy for taking on critics who accused him of piracy because he lacked citations in previous works. “I wanted the reader to experience in my mash-up dubiety of the first person pronoun,” he writes. “I wanted the reader to not quite be able to tell who was talking—was it me or Sonny Rollins or Emerson or Nietzsche or David Salle or, weirdly, none of us or all of us at the same time.” Shields has no problem declaring the novel and intellectual property rights outdated if the author can’t find a way to make them relevant in an age that has little use for them in their reified and ossified forms.

What are we to make of this? Do great artists and writers fight tooth and nail for their forms and their product because they know the work is great while middling artists embrace the mash-up and creative commons as a dodge away from their inability to produce memorable works of their singular authorship? In the end, who cares? Shields seems to be saying. “We are all so afraid. We are all so alone. We all so need from the outside the assurance of our own worthiness to exist.”