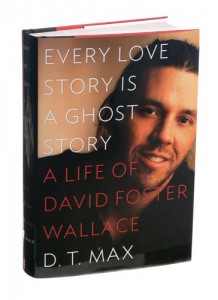 A one-star Amazon review of D.T. Max’s new biography of David Foster Wallace, Every Love Story is a Ghost Story, lampoons the book as “SHALLOW.” Another one-star review accuses the book of being full of pointless factoids. But it seems to me that these complaints miss the point entirely: Max’s task was precisely to give plain surface to the assumed depth and perspicacity of David Foster Wallace.

Last year at the urging of a few of my students, I designed and taught a seminar on Wallace. Before preparing for that class, I didn’t know his work terribly well; for whatever reason, it existed on the periphery of my knowledge of contemporary American literature. Maybe it seemed too trendy, or too brainy, or both—whatever it was, I had only read bits and pieces of Wallace, anthologized in collections or appearing in magazines here and there.

After immersing myself in Wallace’s writing for a summer, I was pretty hooked; or at the very least, I was looking forward to teaching the seminar, in which I planned to put Wallace’s work into a variety of critical-theoretical contexts. Over the course of the semester I was struck by just how into Wallace my students got. And through reading and teaching Wallace, my own writing was affected, or maybe even infected. I found myself entertaining competing lines of thought that I can only describe as a kind of ruthless everyday dialectics: the subjects weren’t always profound, and conclusions rarely (if ever) arrived at, but somehow Wallace’s way of working through topics from multiple angles was contagious.

After finishing Max’s gripping and sad biography, I must admit that I find Wallace a little less likeable as a person—but at the same time, I feel for him more than ever, better appreciate his place in a broader literary-philosophical landscape, and am eager to teach my DFW seminar again.

Max has pulled off a difficult undertaking, then, in constructing this biography. He exposes the many (often competing and even downright contradictory) aspects of Wallace, some of which are unsightly or even repulsive, and yet he manages to lure the reader into a sincere attachment to the author (i.e., Wallace) as a singular subject—so much so that the abrupt end, which most readers will knowingly anticipate, still comes as a shock.

Certainly the biography is a construct, an overlay of synthetic structuring elements onto something so much more splintered and amorphous—namely a life. Much of this endeavor (i.e., the biography) resembles piecing together a mystery or indeed a ghost story that includes unsuspecting and unexpected characters. Little things like prepackaged snacks called “blondies” take on weird meaning and weight. Wallace’s perspiration is a constantly looming potential or dripping presence. A certain silver velour chair where Wallace worked moves around the United States with him. The reader begins to envision haunted spaces covered by draped bathroom towels that dried long ago.

Max hits his stride about two thirds of the way into the “story,” as he narrates Wallace’s intense negotiations with the massive publishing machines of the end of the twentieth century, in all their fickleness and finicky maneuvers. Standing out against this rather intimidating backdrop of staggering advances, book contracts pulled at the last moment, and at turns glowing and debilitating reviews are Wallace’s longtime agent Bonnie Nadell and his editors Gerald Howard and Michael Pietsch, all of whom stuck with Wallace through various protracted sessions of writing and non-writing. If there’s something about the story of David Foster Wallace that is truly comforting, it is to see the dedication and belief in the artist encapsulated by these three.

Of course, a more cynical way to view Wallace’s close ties in the publishing world would be to see these editors and his agent as seizing on the author as a profitable culture industry. Yet even if so, their tenacity still turns out to be noteworthy, particularly when one considers the status of more contemporary risk-taking writers like Quentin Rowan and Jonah Lehrer. These were two fascinating cases where real difficult issues of authorship, creativity, and citation could not be uttered or heard, for all the enraged excoriation of the writers. Today, it would seem that editors and publishers are all too willing to forcibly eject and publicly blackball authors who are found out to be anything less than Eagle Scouts when it comes to the forthright definition and integrity of their work—even if, as in the cases of Rowan and Lehrer, the final products were poised to sell well and generate public intellectual conversation.

As Max shows, Wallace took fanciful liberties with his nonfiction, and slid real characters (like the Jeopardy! host Alex Trebek) into his fictions, placing his work on occasionally tenuous legal ground for his publishers. Furthermore, by Max’s account, Wallace was sporadic at best and unreliable at worst in terms of producing writing—not to mention writing that could then be easily converted into book material. Max’s telling of Wallace trying to get his early stories published amid the touchy legalities surrounding actual pop culture references is riveting, especially from the perspective of contemporary writers who dance on tightropes between fiction and nonfiction, fabulation and cultural critique. This is all to say that the case of Wallace as told by Max causes one to sincerely hope that there are still agents, editors, and publishers who are willing to stand for the art of writing, and stand by their artists when envelopes actually get pushed.

The trickiest part of Max’s book must have been assembling something coherent and narratively appealing out of the complex miasma of “so much” that Max admits was Wallace’s overwhelming sense of the time in which he lived while trying to write about it. To be sure, Wallace would have been nauseated by (while at the same time entirely understanding) this seeming need for a linearly constructed, carefully threaded life of the author. Max’s biography is decidedly un-creative in its execution—or to put this bad pun another way, and channeling Roland Barthes, the birth of the reader of the biography really does require the death of the author, putting under erasure (at least temporarily) all of his stylistic, philosophic, and aesthetic experiments.

On the other hand, and again, what is admirable about Every Love Story is a Ghost Story is that Max dares to tell the story of David Foster Wallace in a straightforward way: with minor details abounding, and not always figuring into a grand narrative. Some things just fade away.

At one point during the semester of my DFW seminar, I was chatting in the hall with one of my colleagues and he mentioned that he’d just finished Infinite Jest. He said offhand that he was pretty sure “no one will remember Wallace ten years from now.” I recall being flabbergasted by this claim, but not necessarily because I think it’s wrong (I mean he could be right; but really, who can say what the state of memory will be ten years from now, not to mention what people will remember?). Rather, my colleague’s comment struck me as a peculiar way of assessing what our students are interested in now, and why this might be. I was dumbfounded because the claim seemed to dismiss the ways that David Foster Wallace—whatever his personal failings, whatever his abstruse if dogged attempts at upsetting post-World War II American literary conventions—functions as a lively (even while dead) index of a whole host of contemporary arrangements, cultural tensions, and ephemeral crossings.

The lessons of David Foster Wallace lie very much in exterior constellations: the politics of writing and publishing in the age directly before new media; the surges and plunges of late American entertainment; regional and subcultural identities, and their bounties and blindsides; depression, analysis, diagnosis, medication…. It’s never just about the author—and Max gets this very well.

Michel Foucault once theorized that “if we are accustomed to presenting the author as a genius, as a perpetual surging of invention, it is because, in reality, we make him function in exactly the opposite fashion.” To desire a resplendent Author at the center of Max’s biography is paradoxically to limit radically the work of the art. Every Love Story is a Ghost Story lets Wallace be a mere dead author, a fleeting point of convergence and expression that, somewhat miraculously, does not end where the writer does. D.T. Max has written a perfectly square biography of David Foster Wallace, thus allowing the literary works to live on in all their eccentric trajectories, exquisite topographies, and speculative tessellations.