You are here: Home / Essay / Dispatch from the Ozarks: Racked

In anguish also they wail the fatal snare….
O ye that are two souls within one fire

The wild deer, wand’ring here & there,
Keeps the Human Soul from Care.

A couple of weeks ago in Moonshine Hollow a slim, but tall, sycamore fell in the woods athwart a path that wanders along the mighty Little Piney River. Eventually I was out with my chain saw to dismember the white trunk to clear the way. The trees were almost leafless, after a weirdly resplendent fall that followed on the worst drought in the memory of middle-aged men. The Burlington Northern—Santa Fe railroad embankment looms above, punctuated with some abandoned telephone poles, decorated with translucent blue insulators and draped with downed wire that used to carry party line calls from Newburg to Jerome. Parallel the Little Piney flows steadily west, towards its confluence with the Gasconade.

I spotted a grey doe tip-toeing across the ford about 200 yards downstream. Happily the chain saw worked, and buzz buzz buzz buzz the fallen tree was reduced to slices of single-moron chuckability. As I upended an eight-foot log off the trail, I noticed an oddment up by the railroad embankment. A dead deer…no, two, dead white-tail deer side by each.

I high-stepped through the knee-high grasses and across a ditch, that in high water carries a stream, happening on a scene neither Hank Thoreau nor Annie Dillard ever described: two ten-point bucks were splayed on the ground, still, in horizontal thrash, quieted by death. Their interlocked antlers were festooned in telephone wire. While they had jousted in male sport, one had snagged a fatal wire in his hooked rack, and then the other became similarly snagged during the tussle. Both were ensnared.

Righteous hormonal fury must have amped into wild panic, induced by a stray ten-gauge copper catalyst. As they tried to fight and to untangle themselves, at the same time, the wire hung up on a small oak tree and now the two antagonists had an inflexible foe. They ringed round the tree—12 times—clenching the head-net of wire about the tree-post, pinching the strictures ever tighter. Inexorably they wound up all diminishing freedom of motion into a tightly trussed tête a tête. Two feet of tough bark rubbed off in their vain struggle. Six feet of insulation on the wire was repeatedly burnished to reveal glistening metal. Their antlers closed inescapably into a crushing cage, like some torture contraption invented for the Inquisition. One curved tip of pointed horn stabbed through the under-palate of the other, into the mouth and through the tongue of the sometime antagonist, whose own menacing rack pinned the powerful neck of the terribly twinned buck.

A circle with a six-foot radius from the tree was pounded to dirt in the interminable time that they faced off in bewearied animal terror, until they were immobilized in wound-up termination. Did they ever stop fighting each other? Did the coyotes dive into their entrail feast while the doomed animals still breathed? Who is immune to catastrophe? 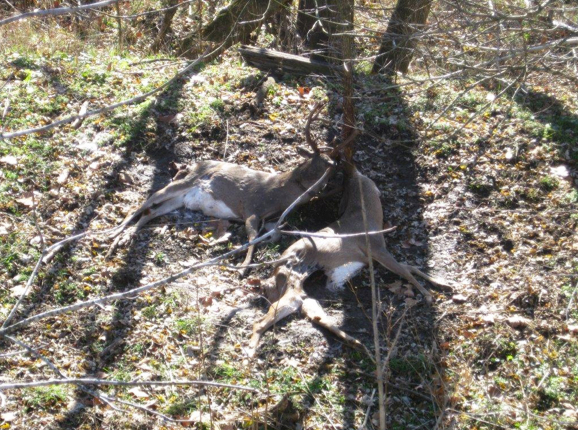 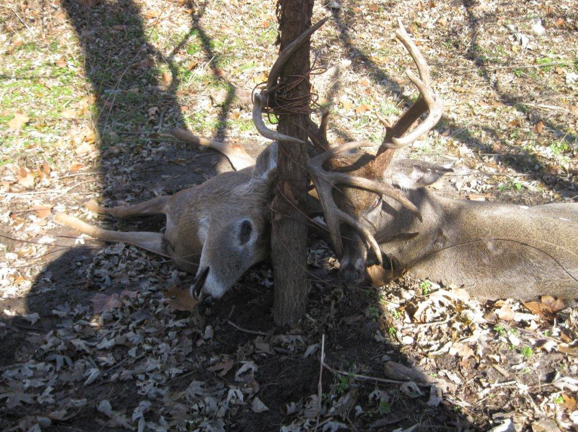 James Bogan is a poet, film maker, and emeritized professor of the Missouri University of Science & Technology, who has lived in the Ozarks since 1969.  Future labors include a film in the Amazon and electronic re-issue of Sparks of Fire (1982), an experimental anthology devoted to William Blake.