You are here: Home / Interview / Jennifer Steil: I began thinking about the hazards of Western people coming to the Middle East to “free” the women 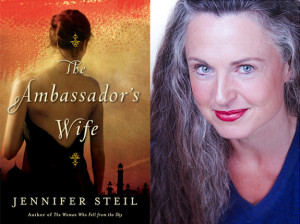 Jennifer Steil moved to Yemen in 2006 to be editor-in-chief of the Yemen Observer and later married the British Ambassador to Yemen. Her first book, The Woman Who Fell From The Sky, is a memoir of her time in Yemen.

In her new novel, The Ambassador’s Wife, Steil’s protagonist, Miranda, is an artist who moves to the fictional Middle Eastern country of Mazrooq and marries the British Ambassador. The plot centers on Miranda’s kidnapping by Mazrooqi troops, which devolves into months of terror, including an orphaned child to whom Miranda grows dangerously close.

The story is told through varying perspectives: Miranda; her husband, Finn; his political colleague, Norman; and two Mazrooqi women, Imaan and Tazkia. While Steil writes in the male perspective adeptly, I found myself more taken by Miranda’s chapters: her romantic past, desire to help everyone she meets, liberal politics, artistic drive, and, ultimately, struggle to survive and reunite with her husband and daughter. The Mazrooqi women, too, are compellingly written—brave, loving, and, ultimately, far too complex to be “saved” by Miranda. It is almost, in fact, the reverse, as Steil depicts a complicated cultural interaction where giving and taking—in love, family, faith, politics—are unclear, fuzzy concepts.

Steil, who now lives in La Paz, Bolivia, won the 2013 Best Novel award in the William Faulkner-William Wisdom Creative Writing Competition. She is returning to New Orleans to read from her novel and sign books from 2:30 – 4:30 p.m. on Sunday, August 9 at The Cabildo (701 Chartres St.), along with fellow Faulkner Society Gold Medal authors Moira Crone, Frederick Barton, and J. Ryan Stradal.

Room 220: Your first book is nonfiction, and you have decades of experience as a journalist. What made you want to write a novel?

Jennifer Steil: Writing my first book, a memoir, felt like a natural outgrowth of my journalism career. In fact, it was journalism. I was scrupulous about telling the truth, getting all of the details correct. I had Al Qaeda experts read the two pages on Al Qaeda. I had Arabists edit my Arabic transliterations. I was careful not to alter one word of a quote. By the time I was finished writing that book I was really tired of telling the truth. I longed to make things up, to exaggerate, to create characters who didn’t resemble anyone I knew. Fiction seemed so freeing.

Also, around the time I conceived The Ambassador’s Wife, I had just moved into a very strange world. I was living with the man who is now my husband, who was then the British Ambassador to Yemen. We were surrounded by bodyguards every time we left the house. We had hostage negotiators staying in our guest bedrooms. We were driven around in armored cars. And we lived in a huge house with a staff of five. Nothing in my life had prepared me for the weirdness that is diplomatic life in a high-security environment. Often I found myself thinking: Wow, I have got to use this in a book.

But not wanting to ruin my husband’s career so early in our relationship, I realized that if I wanted to write about the diplomatic world, I would have to do it fictionally.

The funny thing is that ultimately I probably did as much research for The Ambassador’s Wife as I did for The Woman Who Fell From the Sky. I had to find out how hostage negotiation worked, how emergency travel documents were issued, and what embassies do with captured pirates.

Rm220: Have you ever formally studied fiction writing?

JS: I studied creative writing at Sarah Lawrence College, where I completed an MFA. But if I am honest, I feel that my degree in journalism and my career as a reporter were much more useful to my career as a fiction writer. Journalists have to write every single day. They have to write to specific word counts. They have to meet deadlines. They must learn to include only the details essential to the story, details that enrich it somehow. There is no better preparation for a career as a novelist than journalism. My advice to young writers is to get a job as a reporter rather than an MFA, and avoid a mountain of debt.

Rm220: I’m aware that your novel is based off a real event, when you were held hostage for a few hours in Yemen. Can you talk about this experience, and how you chose to write about it?

JS: It’s true that I was held hostage in Yemen when I was six and a half months pregnant with my daughter—but only for an afternoon. Still, it was definitely the most terrifying afternoon of my life. I had to write about that incident immediately afterwards to explain to the UK Foreign & Commonwealth Office exactly what happened. So I already had a detailed account of it.

But while it is the triggering event for the novel, it wasn’t actually what I started with. Because I had just given birth to my daughter, I had been thinking about parenthood. I began wondering what would happen to a marriage if one person wanted to adopt a child and the other refused—and then suddenly they found themselves with a strange child in their care. What would happen? Which bond would win out, the bond with the child or the spouse? Ultimately this is not what The Ambassador’s Wife ended up being about, but it was one of its seeds.

As I wrote, I also began thinking about the hazards of Western people coming to the Middle East to “free” the women. When I first arrived in Yemen, a Maltese woman at a dinner party whose name I no longer recall railed against Western feminists who came to Yemen and tried to transplant western ideas of feminism. Many of these ideas would simply get women killed. Foreigners had to learn to work within a new cultural context, considering how their “help” will actually affect the lives of women.

The more I wrote, the more issues came up. What happens when a mother is away from her own child for an extended time? What would happen if an ambassador’s wife were kidnapped? Could he stay in post? Would he have to leave the country? What are the real effects of drone strikes in the Middle East? What are the limits of diplomacy?

Westerners tend to view Muslim women as powerless. I wanted to explore some of the ways these women have power. They have the power of their connections with family, with each other. I wanted these women to play a pivotal role in the plot and its resolution. In many ways, these women are more powerful than Finn is under the circumstances of the book.

While obviously I have experience with diplomatic life, most of the situations I write about in the book never happened to me. I wanted to explore what would happen in that world were it provoked in specific ways.

Rm220: Your protagonist is bisexual, and it is refreshing to see a bisexual character depicted so well. Miranda’s sexuality is not sensationalized, it is simply a fact of her existence, and, while it does not take over the plot, it plays an important, surprising role at the end. You also introduce characters for whom Miranda’s sexuality is problematic and confusing (notably, a Western man). Miranda and her girlfriend find it easy to be together in Mazrooqi, because the Middle Eastern culture is so comfortable with women living together and being affectionate. Can you talk about writing a bisexual character?

JS: When I first imagined Miranda, I imagined her with a girlfriend. She just appeared in my head that way. I didn’t have any particular agenda or set out to make any political points. Often books about gay and bisexual people are exclusively about their sexuality. This book is not about Miranda’s sexuality. She just happens to be bisexual. Her bisexuality isn’t the whole point. It’s just one part of her. It does also contribute to the complications of the plot, which is fun.

It was indeed interesting to me that in Yemen, where women and men are completely segregated, same sex affection was very much on display. The men all walk around holding hands and cuddling and kissing each other, which I found endearing. And surprising, given the extreme homophobia of the culture.

Rm220: In The Ambassador’s Wife, you take on the treatment of women in the Middle East, through both American and Mazrooqi perspectives, handling the topic with care and sensitivity. Were you at all hesitant to write in the voice of two Middle Eastern women, which could be seen as speaking for a group of women with which you do not identify?

JS: Authors have always written from the point of view of people very different from themselves. One of my favorite writers is James Baldwin, who had the astonishing ability to write believably and compassionately from the point of view of a straight white woman or an Italian man or anyone else. His intense empathy makes him a great writer about what it means to be human—in any skin. I lived in Yemen for four years, and have intimate friendships with many Yemeni women. Many of the ideas and thoughts expressed by the women in my book I have heard expressed by them. I do not presume to have gotten them exactly right, but of course they are ultimately fictional characters, and we are all different. But still human.

Rm220: When did you start writing this book, and how long did it take you? It seems you had a tumultuous few years during the process: you married, gave birth to your daughter, your husband survived a suicide bombing attack in Yemen, you moved to London and then to La Paz. Was it hard to write during all of this upheaval?

JS: I began writing this book a few weeks after giving birth to my daughter in 2009. I finished it in 2013. While I adore motherhood and my daughter is one of my favorite two people on the planet, I found out very quickly that I cannot live without working. I needed to be writing. While it is sometimes hard to make the time to write for long stretches, I do thrive on chaos and change. I love that we move around and live in different cultures. It’s inspiring. And writing gives me a way to process all of the traumatic bits!