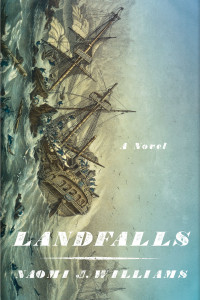 In the third chapter of Naomi J. Williams’ novel Landfalls, a group of men look for a town that seems to have gone missing from the world. “How strange that the town was not there,” Williams writes. “Their maps, freshly minted by the Office of Charts, had guided them safely around the cape, past the eastern side of Quiriquine Island, and into Concepción Bay.” But still they’re baffled. “They had consulted Frézier’s 1712 drawing of the view from the bay, in which one could make out the whole breadth of the town and the spires of eight churches. Where had it all gone?”

The scene, like the book, is based in historical fact: the men are members of the ill-fated Lapérouse expedition, and the town, a European outpost where they plan to get fresh supplies, is Concepción, Chile.  Jean-Francois de Galaup de Lapérouse, commissioned by the French crown in 1785 to circumnavigate the globe on a voyage of discovery, commanded two ships, the Astrolabe and the Boussoule, along with two hundred men, until the boats sunk on a reef in the Solomon Islands. (I’m not giving anything away; there’s a picture of the wreck on the cover of the book.)

The original town of Concepción, Williams’ narrative reveals, has been destroyed by a tsunami in 1751. A new settlement has been constructed inland, so that Lapérouse and his men are able to resupply. The story that might have been—desperate sailors cut off from expected aid, struggling to preserve themselves and their ships—is averted, and what follows in the rest of the chapter is a drama of manners and sexual etiquette as the men are feted by the Chilean colonists.

The scene haunts the rest of the book. Landfalls continually finds new ways to remind its readers of what comes to seem a more and more unsettling fact: a map is always a history. As much as a chart of oceans and landmasses, rivers and human settlements, may appear to say, “This is how things are,” all it can declare with truth is, “This is how things appeared when I was there.” The map is not the territory. Shorelines change.

Much about the book itself is map-like, beginning with its structure. True to the title, almost every new chapter concerns a new landfall made by the expedition. There are some exceptions. The events of Lituya Bay in Alaska, which Lapérouse and his men discovered for Europe, and where twenty-one sailors lost their lives to dangerous currents, are told twice in two chapters, first from the perspective of a young Tlingit woman, then from the perspective of one of the ships’ captains. Likewise, the first chapter, rather than being set during one of the landfalls, takes place in London and follows Lapérouse’s chief engineer as he pursues crucial knowledge and navigation apparatus from colleagues of the late, famous Captain Cook, and the last two jump ahead decades to portray the aftermath of the expedition’s loss. Still, for the most part, Landfalls takes its form from the helpful map included in its front matter. You can follow the progress of the book by tracing the path of the expedition with your finger.

The result of organizing the book this way, rather than, say, around the development of difficulties or the solving of problems aboard-ship  (the Patrick O’Brian approach) is that Landfalls resembles a series of closely linked stories almost as much as it does a traditional novel. Williams flits not only from character to character, but from genre to genre; Landfalls is capable of presenting a claustrophobic Conradian riff on colonialism-as-parasitism in Macao, only to transform into a Rashomon-like mystery by the time the expedition reaches Botany Bay.

In most places Williams’ prose is plain, even—like much else about the book—austere. Landscapes, however, inspire lyrical description. When the expedition’s Russian translator, having finished his duties by making communication possible at the Pacific port of Petropavlovsk, is sent back overland to carry news of the ships to the French ambassador in St. Petersburg, he must travel by dog sled through a Siberian winter. Williams is taken with the trees and mountains and snow:

The road north, such as it was, snaked through a birch-filled valley between roughly parallel chains of volcanoes. At first he marveled at the stark beauty of the landscape – the watchful white trees ranged like sentinels in the snow, giving way occasionally to reveal, on a clear day, massive volcanoes smoking benignly against a sky so blue it hurt to look at. But the beauty palled after a while – it was monotonous, unrelenting, and altogether indifferent to their human presence.

This elaborated and lovely language is never less than clear. As on a pleasing map, part of the beauty is that you are always sure where the landmarks are supposed to be.

But, as the Concepción episode reminds us, clarity on the page shouldn’t be mistaken for certainty in the world. If one thing this novel always seems to be about to turn into is a map, another is an archive. It certainly has the archivist’s concerns about provenance, completeness, and authenticity. Members of the expedition are continually concerned with how they will account for themselves in the letters they send back to France. One whole chapter revolves around a conspiracy among the Astrolabe’s doctor, priest, and cabin boy to enable their captain to write a psychologically difficult letter. By the time the letter is sent, however, the identity of its real author has grown unclear. Other chapters probe the limits of the archive by treating the expedition from non-European, non-literate perspectives. As eighteenth-century Frenchmen, the members of the expedition allow their thinking about the native people they encounter to be ruled by the antipodal categories of brute and Rousseauian noble-savage. But Williams presents her native characters as immersed in the debates and cultural expertise of their times and places. The account of the Solomon Islander who marries one of the expedition’s surviving members after he is cast away on her island would be a historian’s dream, if only it weren’t fiction.

It’s rare for a novelist to confront the difficulty of reconstructing the past from historical sources in quite this way. Generally, all it takes for a book to be fall into the “historical novel” category is for it to set its action among people and events that no longer seem contemporary. Williams’ book deserves a more precise name: a historiographical novel, perhaps. Whether that sounds like an appealing classification is probably a good test of whether a given reader will enjoy this book. For my part, I found Landfalls both thought-provoking and impressively moving.

When you look at history as closely as Williams does, it no longer seems to provide a very secure mooring for our lives. The distinction between map-as-picture-of-the-present and map-as-history may not seem like much in the era of Google Earth and regularly updated satellite images of every spot on the globe, but for the men of Lapérouse’s expedition, coming unmoored was a disaster. Even in the modern world, a plane full of people like Malaysia Airlines 370 can drop off the map as completely as the Astrolabe and the Boussoule did. We live closer to the world of Landfalls than we are comfortable contemplating, closer than we can bear for our maps to show.

Jamie May is a graduate of Florida International University’s Creative Writing Program. He’s finishing his first novel, a mystery set in an early Soviet prison camp.