You are here: Home / Fiction / Maid of the Mist 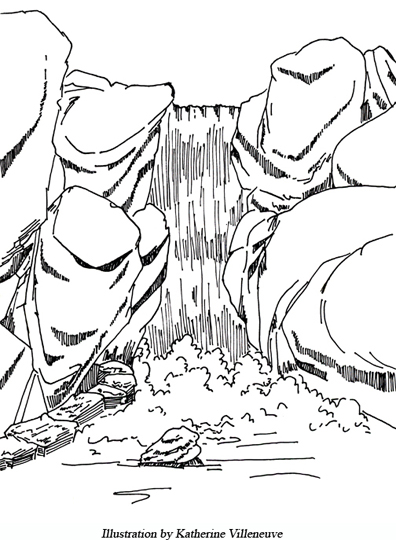 You could walk along, seeing the water in its pace, a bird sitting on a rock, flying up and up, to the other side without thinking twice about customs and passport. Spreading, gliding, shitting on a picture-taker like me.

Sometimes I went there on my own as a reminder. The American side, strolling by the river, which was usually less congested. No one stepping on my hemline. I’d go and watch the water waltz with itself. It made me seem puny.

On the way to the Falls, I gave him some statistics. Lake Erie to our left. Not a lot of beaches. Is it really that small? he’d asked. It’s a Great One, you know. Like the one we knew from high school. We paid a toll for bridges, traveled through, over, the Grand Island, and I recalled this route, another man. Another. I’d run a marathon, from this country to the other. Huh, he said. I’d been a passenger then.

At customs, we showed our pictures to patrol, smiling, waiting, answering one word each. Drove and parked, then walked along, to the gorge, where water fell and splashed and misted. I could almost put my hand in.

We snapped some shots. He was my love, my first. I didn’t know if he was the one. I told him about coming here with my son, how, on all of his school papers, he was classified as other. How I missed his need, how he’d grown into adulthood. How we hadn’t crossed the border, since he needed a passport.

I’d come with another out-of-towner, who’d bragged about his prize, mailing me package after package. A deadbeat and his daughter, how the ice crunched underneath, and our breaths made clouds that left quickly. Then, with a musician, a composer: a crescendo with the roar of the water—oh, the Maid of the Mist.

Me, alone there, the first time. Cold. The snow, the white white whoosh.

Now we drove to lunch, settling for a place with a menu I knew, and I ordered the salad bar with beets and macaroni. He ordered a burger you could get anywhere. The waiter was apologetic and slow. Out of the window I saw a hill, a circus of neon, Ripleys. He said he had a good look of the water. I turned—bending, like in yoga, the half spine twist—ardha matsyendrasana.

Kim Chinquee is the author of the collections Oh Baby, Pretty, and Pistol. Her work has appeared in The Nation, The Huffington Post, Ploughshares, Conjunctions, NOON, Denver Quarterly, Mississippi Review, and several other places. She received a Pushcart Prize, is an associate editor of New World Writing, and is an associate professor of English at SUNY-Buffalo State.