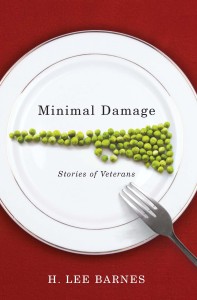 In H. Lee Barnes’ short story collection, Minimal Damage: Stories of Veterans, the physical damage the characters suffer may be small, but the complexity of their post-war situations is anything but minimal. Like most soldiers portrayed in literature, the characters are tough guys hardened by combat, but in place of a battlefield, war rages inside these veterans’ minds. In the collection, there are characters on a constant search for redemption, purpose, or  brotherhood, but each one has to come to terms with his past in order to be free.

In “Punishment,” inmate Billy Debecki is on death row for killing a cop. In his final moments, he reflects on his past and family. Growing up in Las Vegas, he understands that “gambling isn’t about hope. It’s about odds. You win with the odds,” and he equates that to life: “[E]verything is an accident. Or nothing is.” Although the odds did not always end up in Billy’s favor, he finds a slice of comfort in knowing he did something right once, risking his life to save a Panamanian soldier. Not all of the collection’s characters discovers such salvation. In “Into the Silence,” Crazy Hank, a panhandler who suffers from flashbacks and the cruel displacement of being a Vietnam veteran, finds himself at the end digging in a heap of garbage for a sign. “Everyone needs a sign,” he explains, but all the cardboard he rummages through is either crushed or bent. Yet, he understands that he and other Vietnam vets are silenced, and realizes that instead of signs, they need voices.

Minimal Damage will never be as iconic as other war story collections, such as The Things They Carried by Tim O’Brien, but Barnes offers an emotional and, at times, humorous set of stories, filled with a myriad of likable, sympathetic characters that lead the reader through their minds and journeys. The greatest difference between Minimal Damage and other war collections is that these stories are not about battle, but rather, they show that the battle continues when these veterans have to fight with themselves and their fates.