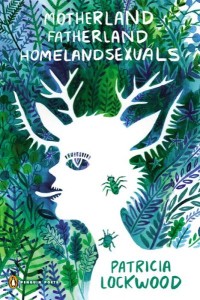 Lockwood’s outrageous poems transport the reader into a world overflowing with hyper-sexualized and twisted humor, intertwined with her own personal difficulties concerning love, war, and rape. Her poems are set in the natural world but they could never exist within nature, exactly: dolphins growing human-like breasts; a horse having intercourse with nature; Bambi as a porn star. The poems play with and alter our conceptions of the world, such as when Lockwood presents the world as a ten-year-old in love with Egypt, or at the prospect of Emily Dickinson and Walt Whitman’s tit pictures. Within the seemingly light humor Lockwood unfolds troubled realities of the present moment, depicting the United States as a giant modern factory, which is “churning out fake oranges” and the atrocities of death in war, “the hill that they died on was often a woman, wearing the greatest uniform of war.” Lockwood brings her readers to an intimately personal level when she writes “The rape joke is that you were facedown.” Her seemingly supernatural material becomes miraculously accepted as natural, as each poem takes us further into a bizarre world, and the reader is struck with lines of poignancy, importance, and depth. We are able to see into the poet’s intricate and introspective mind, which means being confronted with outlandish images and comminglings of humans, animals, and nature. Lockwood’s poems portray the creativity and adventurous nature of our present epoch, inventing what seem to be modern-day tall-tales.