You are here: Home / Interview / My belief is that we’re all face-talking: An interview with Eli Horowitz 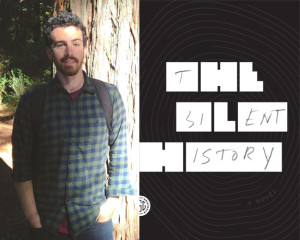 Eli Horowitz—former editor and publisher of McSweeney’s—released a new book about a generation of children born without speech, The Silent History, as a serialized novel that came out daily on iOS devices (iPhone and iPad). It included e-specific features like “Field Reports,” mini-stories that existed within the world of the overall novel—deepening the story but not essential for the main narrative—that you could only read if you were in a particular geographic place (in the real world with your iPhone).

This novel-as-app—co-created by Horowitz, Matthew Derby, and Kevin Moffett—was first released in 2013 to intense acclaim. It won a Webby award and an Apple Best App award, and it was a finalist for the SXSW Interactive Award and an Official Selection of the Sundance New Frontiers Story Lab. Wired magazine called it “entirely revolutionary.”

This summer, FSG released a version of The Silent History in paper novel form, and Horowitz will be in New Orleans to give a reading from it at Happy Hour Salon presented by Room 220 from 6 – 9 p.m. on Wednesday, Oct. 29, at the Press Street HQ (3718 St. Claude Ave.). He will be joined by local author Adrian Van Young.

Horowitz was the managing editor and then publisher of McSweeney’s for eight years, working closely with authors such as Nick Hornby, Michael Chabon, Joyce Carol Oates, William Vollmann, and Stephen King. He is the coauthor of The Clock Without a Face, a treasure-hunt mystery, and Everything You Know Is Pong, an illustrated cultural history of ping-pong. Before McSweeney’s, he was employed as a carpenter and wrote science trivia questions tenuously linked to popular films. He was born in Virginia and now lives in San Francisco.

What follows is the product of a quick Q&A that we did a week ago via email.

Room 220: What made you want to publish a book that is also an app?

Eli Horowitz: The rise of e-books felt a little depressing—it felt like we were losing some of what made print books special and getting nothing in return. Before I even knew the story, I knew I wanted to explore how a novel could take advantage of the digital form, finding new ways to tell stories. The Silent History was our baby step down that path.

Rm220: This book seems consistent with the adventuresome, often playful ways you presented McSweeney’s Quarterly—how the stories were packaged, put in boxes, bundles, on playing cards, packaged with a comb. Did you want to engage the reader in emotional, cerebral, but also tactile ways?

EH: It definitely emerged from the same place as a lot of those McSweeney’s projects — reaching the reader not just through the story itself but also how the story is told and consumed. It was also like McSweeney’s in that I didn’t know what I was doing but I did it anyway.

Rm220: In laying out the book, did you picture it graphically, (the circles of time and the pie slices), or did you let the plot dictate the graphics?

EH: That all emerged later, in collaboration with Russell Quinn, who handled the technical side of things. I did have some semi-arbitrary mathematical ideas about the plot structure—six volumes, twenty chapters in each—which I didn’t even question until much later, when I realized we were writing a 500-page book. Yes, that was a conscious decision. Those multimedia flourishes can be seductive, but we were specifically asking: What would it be like to conceive a novel for one of these devices?  There are surely interesting opportunities with audio and video, but we wanted to stay clear in our minds that were creating a book, not some other mishmash.

Rm220: The book has three authors and the writing is consistently wonderful. Smart, sad, funny, hilarious in places, and suspenseful, surprising, twisty. How did you divide the work up?

EH: I outlined it pretty thoroughly in advance, all 120 parts—though that evolved pretty significantly during the writing as some parts fell flat, fun new characters emerged, etc. Matt or Kevin would take each day/chapter, depending on whose character it was, we’d talk over the plot and tone, they’d write a quick first draft and send it to me, and then we’d bang it back and forth until we were somewhat satisfied.

Rm220: Why did you decide to also publish The Silent History as a “real book”? I noticed some differences between the two, because I alternated between the two versions, which was cool. It was helpful to be able to go back to a character on the app and see what other things he’d said or done.

EH: It always bothered me that people had to own a particular brand of cell phone to read the book—that just feels lame. Going to print allowed us to reach a different audience, explore how the story might exist in a different format, and just revisit the text in general. There are some inherent advantages of each form, no doubt.

Rm220: At the risk of sounding like a goob, this would make a great movie or TV series, don’t you think?

EH: AMC is currently trying to turn it into a series, actually. And serialized TV definitely wormed its way into my understanding of the plot—episodes or chapters that can stand alone but also contribute to a larger arc, partial resets in each new season or volume, etc.

Rm220: There are so many provocative, heartbreaking ideas in the book about language, quiet, noise, connection. Did these ideas present themselves as you wrote the pieces, or did you begin by wanting to explore these ideas? It seems, ultimately, to be a book about parenting, not giving up, hanging on, and letting go.

EH: Mostly these emerged along the way—we were lucky to land upon a central premise that lent itself to these diverse manifestations, fears, yearnings. The silents provide a blank slate (or at least seemingly blank) for the other characters to project themselves upon, so we just tried to imagine all the potential perspectives and then let the characters run wild and collide with each other.

Rm220: The book breaks open when it’s discovered that the silents are communicating with each other. Did you and Kevin and Matthew ever try face-talking with each other? It seems painfully intimate, delicate, between humans who also have words.

EH: Actually, we almost never even saw each other’s faces throughout the whole project!  Kevin is in L.A., Matt’s in Rhode Island, and I’m near San Francisco, so it was all done by email and over the phone. And yes, that probably would have been way too intimate for our repressed souls. That said, my belief is that we’re all face-talking (and face-listening) all the time, to a much greater extent than we’re consciously aware of.

Rm220: Are you going to publish more digital books? Are you excited about the possibilities of the form?

EH: The project I’m working on now will be simultaneously digital and print, exploring the unique possibilities of each format—not just what digital can do that print can’t, but also vice versa.

Rm220: Are you doing what you thought you’d be doing back when you were a kid? Which is not that long ago, granted.