An ambitious new volume, N.O. Lit: 200 Years of New Orleans Literature, collects short fiction and plays that reflect the city’s literary history, from Paul Louis LeBlanc de Villeneufve’s 18th-century play The Festival of the Young Corn, or The Heroism of Poucha-Houmma to Fatima Shaik’s 1987 short story “Climbing Monkey Hill,” with contributions from suspects both usual and unusual filling in the 560-page tome. Editor Nancy Dixon provided informative introductions to each author’s section, placing the works and their creators within the contexts of the city’s history and the history of its literature, making the anthology both an enjoyable artful artifact and an important academic resource.

Dixon is a professor of English at Dillard University and author of Fortune and Misery: Sallie Rhett Roman of New Orleans, which won the Humanities Book of the Year Award in 2000 from the Louisiana Endowment for the Humanities. Here, she responds via email to questions by C.W. Cannon, a professor of English at Loyola University New Orleans and author of the novel Soul Resin.

Room 220: Can you say something about your criteria for inclusion and exclusion of works in the anthology? I notice, for example, that some big names, like John Kennedy Toole and Walker Percy (not to mention Baron Ludwig von Reizenstein!) aren’t included—why not?

Nancy Dixon: I had big plans. I was going to include everyone who’d ever written in this city—every novelist, poet, essayist, journalist, memoirist—you name it. But then I came to my senses, and I was partly pushed there by an editor at LSU Press, who was interested in publishing the book. She insisted, “No excerpts!” I had initially planned to include all of those that you mention and more, like Zora Neale Hurston, Nancy Lehman, Sheila Bosworth, Amanda Boyden. But the more I thought about what the editor said, the more it began to make sense. How on earth could I ever make a readable book that included every writer, including novelists? So I decided to include only short fiction.

But having said all that, I hate excerpts, so that’s probably the more honest reason. I just needed someone to remind me of that. If someone wants to read a novel by the great writers you mention and more, they should read that novel, not some teaser. And I couldn’t figure out a way to discuss an excerpt without a spoiler. So I shortened my scope, and shortened the title to reflect that it was a collection of short New Orleans literature. “N.O. Lit” is also what many of us in the University of New Orleans English department called the course that we taught, and I was there when I began compiling the book.

As far as the works that I did include, that required much more work. I knew that I wanted to cover literature in the city since the Louisiana Purchase, so there went Julien Poydras and a few others. I was excited to find Le Blanc’s play, The Heroism of Poucha Houmma, as I had never heard of it, but I had heard of Thomas Wharton Collens’ Martyr Patriots, both early on in the city’s history, so I began there. Some living authors excluded themselves and simply weren’t interested in being a part of this work, which is too bad, but it’s long enough as it is. And as hard as my publisher, Bill Lavender, and I tried, we never could secure the rights to Lillian Hellman’s Toys in the Attic. Others, like Henry Castellanos, simply ended up on the cutting room floor when the book passed the 500 page mark. 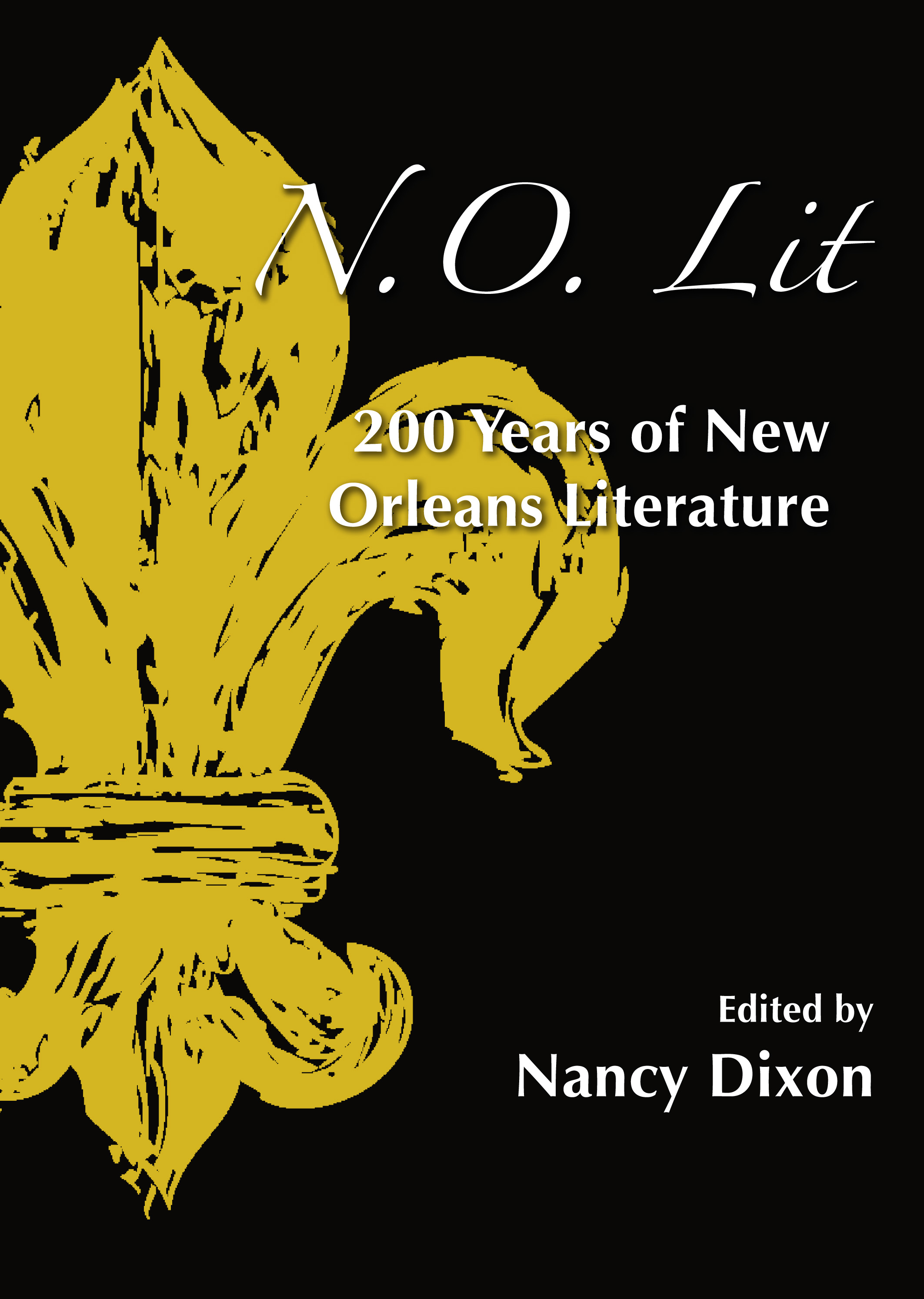 Rm220: A quick perusal of the contents makes clear that many of the works are by people who were not raised in New Orleans and some are by people who didn’t really live here very long at all (like O.Henry). Other pieces, however, are by natives, like George Washington Cable or Hamilton Basso. Do you think there’s a difference in how the natives and transplants and/or visitors depict the city?

ND: Yes, and I think Walt Whitman is a fine example of that. He was in his twenties when he arrived with his brother, and his short vignettes for the Daily Crescent range from wide-eyed recent arrival to man-about-town. Decades later, Faulkner’s New Orleans Sketches remind me so much of Whitman’s New Orleans writing. Others who moved here for a longer time seemed to become New Orleanians, like Mollie Moore Davis, who held salons and lived and wrote in the French Quarter, while her husband, Thomas Davis, edited the New Orleans Picayune. One of my favorite pieces on the French Quarter, however, was Hamilton Basso’s “A New Orleans Childhood, the House on Decatur Street,” especially when he laments what happened to Bourbon Street, where his dentist practices—I wish he could see it now!

I suppose it is much like the current argument about transplanted hipsters who write about the city, or really about anyone who writes about an area without having spent a lot of time there. I don’t believe that one has to be native to a place to capture it. In fact, I’ve lived here decades longer than some of the younger natives who seem to be so adamant about the recent influx of new residents. But you can’t argue with non-natives like Tennessee Williams, Eudora Welty, Kate Chopin, and scores more. In the end, it’s more about the writing than the place that inspires it.

Rm220: Would you venture to say that there is a set of themes or patterns that emerge from these works, viewed collectively, that distinguishes this body of work from, say, “American” literature or even “Southern” literature? In other words, is “New Orleans literature” definable in any way besides geographical setting?

ND: This is one of the questions I get asked the most. I see recurring themes that tie the works together from the earliest up to the present: violence, alcohol abuse, racism, sex, extreme weather (heat, hurricanes), and finally, a sort of liberalism that the city is still known for, and which is also perhaps the main reason I remain here when there are so many things I dislike about the politics of the city and state, particularly—but not only—concerning race and education.

The early racial mix—Native Americans, white Europeans, slaves, free people of color—had much to do with that liberalism, but also with writing. Just look at Les Cenelles and the first anthology of African-American literature. No other city can boast that. And many of the themes that they touched on—racism, sex, the allure of the city, the treatment of women—folks are still writing about today, and unfortunately, many of the problems of the last two centuries still remain.

Rm220: The oldest pieces in this collection are by authors born in the 18th Century and were originally composed in French. It continues up into the 1990s. That’s a big chunk of history that covers lots of huge social and political change.

How would you periodize New Orleans literature?

ND: The earliest works in French were written about the French settlers’ experience, first with Native Americans, then with regime change. The French settlers always thought of New Orleans as French, even after the Louisiana Purchase, as is depicted so well in Cable’s The Grandissimes. After becoming an American state and up to the Civil War, race becomes more of an issue as racism connected with slavery grows. French is still the language for many leading up to the Civil War, including Les Cenelles, Mercier, and Rouquette, but after the war, many more women writers take center stage, much like women entered the work place after World War II. I see post-Reconstruction literature in New Orleans as the golden age, a real renaissance, the first time that writers elsewhere really looked to the city for some of the nation’s best works, and I think that tradition continues. Anderson, Faulkner, Basso, some of the most popular writers of the time moved here to write, and that tradition, too, continues. The mid-to-late 20th century was also a heyday for New Orleans literature, with Percy, Toole, Bosworth, Grau, Dent, and more. I think Katrina changed the writing in the city, but it’s too early to tell if that change is permanent. I do know that there is very little being written about the flood now, but we’ll see what happens next year, the 10th anniversary.

Rm220: Of all the stuff to read, why would you recommend that anyone read this? Is there a target audience?

ND: The impetus behind this book was the lack of one and having to cobble together texts for my New Orleans literature course semester after semester, at UNO and now Dillard. So originally, I thought it would be for me, my colleagues, students, and anyone else who wanted a comprehensive look at New Orleans literature. Over the course of the project, the focus changed somewhat. I found myself looking at works that would, as you say, periodize the city’s literature, but also works that folks would want to read. I also have a huge interest in the city’s history, and I know that shows in my introductions to the authors and their works, but I see the city’s history and its literature inextricably linked. I’m very proud of my intros, and as tedious as they seemed to write sometimes, what is so surprising to me now is that I can barely remember writing some of them. What I’m trying to say is that many of them seemed to write themselves. Perhaps that is because this was truly a labor of love for a city that took me in, almost killed me, but instead prompted me to teach others about the city’s rich literary history—a city and literature that I truly love.