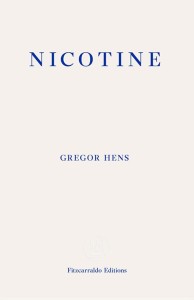 There is no acceptable vice that generates instantaneous revulsion as smoking does now. The division between smokers and non-smokers is like day and night, although once they existed harmoniously in a more blissfully ignorant haze. Remember the era of smoking on planes? I have no doubt that the title of Gregor Hens’ newly translated memoir Nicotine will be enough for some to refuse to read it, an expression of disgust forming on their faces as if the pages themselves were lit and curling acrid plumes. Regardless of what logical, disapproving thoughts society has in regard to smoking’s effect on health, there remains an undeniable seduction that exists around the habit, a mythology cultivated by both memories and media. At some point in our lives most of us have succumbed, if not to the act itself, then the fantasy: a candy cigarette as a child; the ubiquitous glamour of the femme fatale’s cigarette being lit by a stranger in a movie.

Nicotine is a richly obsessive memoir that features the cigarette as both character and subject of study. The author, Gregor Hens, traces a life lived through smoking, considering not only his own habit but also his entire family’s. The small paper wrapped stick of tobacco is a perpetual accompaniment at every stage of his life, from his first magical experience at the age of five or six at a New Years’ Eve gathering where he accepts his first cigarette—offered by his mother in order to light a firework—to his last (referred to as the “true LC,” an acknowledgement of the smoker’s numerous failed attempts to stop), shared on a summer’s evening in Berlin. With the first one lit in his hand, the seduction is immediate—he pays more attention to the smoldering ash than the rockets—and on inhaling, it is complete: he becomes engulfed in the familiar wave of nicotine bliss.

Each memory is wrapped in a haze of smoke. Whether it is cleaning out the home of his deceased aunt (who received a monthly cigarette allowance as part of her pension) with his brother, or the morning after a party where he failed to get the girl (her lack of attention to him the previous night made up for when she blows reviving smoke into his mouth as he sits in bed), smoking infuses the book.

Nicotine is as much a loving account of a habit—told in the same way you would reminisce about a wonderful but long-gone relationship in your life—as it is an exploration of addiction. Such open affection for something so destructive functions as an invitation. During and after reading, I, too, recalled with fondness some of the cigarettes smoked in my life: the summer days after graduating from high school, opening fresh silver-lined packs of Marlboro Menthol 100s down by Lake Michigan to share with friends; the long nights during my brief time at art school where I stayed up to finish a project, an elegant gold-banded Djarum Black clove cigarette in the corner of my mouth, my lips going pleasantly numb.

Hens attempts to understand the scientific reason for what he does. A lifelong asthmatic he was made ill during long car journeys when his parents chain-smoked with the windows closed and shown horrific anti-smoking films at school. Why, he asks, would he continue the habit and why is it so hard to stop? He refers to scientific studies in examining how addiction physically and mentally takes hold, changing the smoker, then notes the ridiculous nature of popular self-help solutions used for quitting smoking. “As if it would be possible to free oneself from an addiction that has been formed and solidified over years or even decades in ten easy steps,” he observes.  At the end of his research and ruminations he knows that there is no definitive explanation for the difficulty of quitting when, “there is nothing standing between [smokers] and the object of their desire.”

Ironically, the act of smoking in Nicotine—as well as the removal of the act—both signifies and celebrates living. With Hens’ first smoke, he proclaims, “I became myself for the very first time.” When he stops, he is not quitting as much as simply refraining. There is a difference. Many smokers refer to the time they smoked as one where they did not truly live because they were imprisoned by their habit, but Hens is continuing to live after he stops, but without the tension of addiction. “The memory of the object has not expired,” he notes, “but it seems that the tension that it generated never existed.”

He is a smoker in his head and heart, because smoking has been his life—so tightly bound to essential memory that to give it up would be to deny his entire existence. This is also acknowledged in the foreword by Will Self, who writes “a smoking habit is constituted by innumerable little incidents – or ‘scenes’ strung together along a lifeline.” Whether or not the cigarette is present is irrelevant in the sense that lives are defined, or at least shaped, in a large part by things, even if at first glance the thing appears to be minor. In the way that a chain smoker lights a new cigarette from the end of the old one, so is each memory and thought of Hens’ connected: the warm glow of one sparks the next.