You are here: Home / Book Review / One Hundred Apocalypses and Other Apocalypses 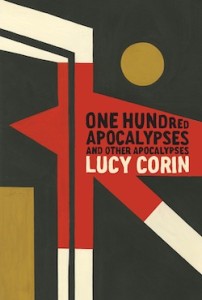 There is a scene in Cormac McCarthy’s The Road, perhaps the most beloved apocalyptic novel to date, in which a man and his son come across a fully preserved can of Coca-Cola amongst the rubble of their fallen civilization. Man and son marvel over the coke, a cultural relic, a memento from their fallen world, and later share the drink with an almost ceremonial reverence. Although McCarthy is not the first or the only artist to call upon Coca-Cola’s cultural relevance (cf. the film The Gods Must Be Crazy), this scene is particularly memorable. In her new volume of short fiction, Lucy Corin responds to and builds on this classic apocalyptic scene. In her short (at times dramatically minute) stories, Corin directly confronts the darkest, most twisted aspects of popular culture and juxtaposes them with an earnest apocalyptic narrative.

The collection begins with longer-form short fiction, including the standout, darkly comedic story “Madmen” in which coming-of-age teens adopt raging psychopaths as a rite of passage. Our narrator, a young girl named Alice, has just gotten her period for the first time and is preparing to visit the sanitarium (or, effectively, the madmen store) with her parents. Available to Alice are “a Cretin, with his wiener in a bottle” or perhaps “a Possessed guy with landscape tattoos” and many others. Conflict arises when Alice makes a choice that doesn’t sit well with her mother. After reluctantly changing her decision to suit her parents’ wishes, Alice relates her mother’s domineering nature to the psychopathy of the madmen:

As we learned in class, when madness comes, it comes up the spine and radiates. Madman after madman has described it this way through history, often saying they were touched by god. Of course that’s not what I felt from my mother—boy would she love that—but my point is that it was very physical receiving her words, like being iced over and then cracked.

In just one story, filled with pithy sentences, Corin establishes an alternate universe that parallels our own in haunting ways. She is telling the story of a young girl coming of age. She is commenting on consumer culture, suggesting that purchasing a psychopath is perhaps not so different from purchasing toothpaste. Corin constructs narratives that question us, that hold us accountable for the way we act and show us seemingly alien worlds that, in truth, are not so different from the spaces we presently inhabit.

Corin hits her stride in the volume’s latter half, the title story “One Hundred Apocalypses.” True to its title, one hundred tiny (at times only two-line) stories comprise this section. It is in this chunk that Corin shows off her proficiency in multiple different styles. Sometimes Corin is terrifying. One story entitled “The Cycle of Life” begins, “She really needed some time off work so she took maternity leave, but the baby was so much work it was like she wasn’t getting any time off at all, so she killed the baby (hold on, hold on…) and that gave her time off for grieving.” Sometimes Corin is sexy. In “View,” an omniscient narrator describes a party guest’s inner-monologue as she stares at her ex-lover: “She knew it curled in his herringbone trousers. The penis, keeper of her promiscuous past and container of the futures of many possible people.”

Most commonly, Corin is frank and unapologetic. She makes her case, coyly engages us, and then pulls the bait right from under our noses. Her tiny apocalypses leave only white space in their wake, and we are left to assess what has just happened to us. Was that a poem? Flash fiction? A pointed, personal attack? I can’t be sure, and I postulate that this is precisely the desired affect.

These are difficult stories, and their narrators are aware of their ambition. Readers may shy away from this prose as it fails to offer concrete plot or character development. What these pieces do offer, however, is a comprehensive argument about our culture. These seemingly harmless vignettes become hypotheses for how an apocalypse might change us, or how we are, perhaps, no different from these doomsday-obsessed characters, how our present world is already anticipating its own end.