You are here: Home / Book Review / Ongoingness: The End of a Diary 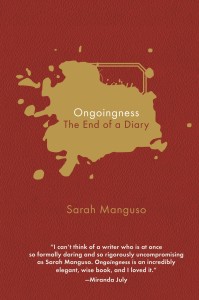 Though a memoir, Sarah Manguso’s latest book, Ongoingness: The End of a Diary, focuses less on Manguso’s life and more on her meticulous journaling, which occupied her for decades because she “didn’t want to lose anything.” Writing about the act of writing quickly becomes a vehicle for broaching questions of a broader tenor: how should we understand our relationship to time? What should we make of that which we forget? Do we even have control over what we remember? Part of the pleasure of reading Ongoingness is watching the narrator’s conception of her subjectivity in relation to time change as she navigates these questions. As Manguso tracks her past through journaling, she revises her notion of time from that which “passes” to an idea that includes the past as an integral part of the present, a notion of time that recalls the Freudian concept of transference and ultimately revises the narrator’s sense of her own agency.

The impulse toward having control over one’s memories, to archiving the past, filing it away and separating it from the present, permeates the early years of Manguso’s journaling. In an overt confession, she writes, “I wanted to remember what I could bear to remember and convince myself it was all there was.” This desire generates tension in the early mini-dramas that lace Manguso’s intellectual concerns with narrative. Through a series of vignettes, a boyfriend reads the diary while borrowing Manguso’s computer. Later, a roommate does the same. These encounters couch Ongoingness in the flesh and blood of human interaction, saving it from pure philosophical speculation. They also foreshadow the thematic concerns of Ongoingness. As Manguso tries to control her past, her memories are literally broken into, suggesting that her early attempts at control were an illusion.

Yet, it isn’t just the past and present that Manguso tries to separate during these early years. Referring to a series of lovers, Manguso says she “kept seeking and finding the exquisite moment. By the eighth, I’d already be seeking the ninth and tenth.” Delineating each experience so concisely, meeting one person and then moving on to the tabula rasa of another, reinforces one of the primary reasons for Manguso’s tireless journaling: “I wrote [my journals] to stand for me utterly.” Manguso seeks to locate a sense of self that is neatly contained, a subjectivity that is impervious to change, even by those who surround her. Her impulses to separate past from present and self from others are related. Both shore up the larger desires for agency and identity.

As Manguso continues to journal, she realizes she “…began losing interest in the beginnings and the ends of things. Short tragic love stories that had once interested me no longer did.” What engenders this realization is left unspoken, but it nonetheless heralds a transition in Manguso’s thinking. Time as that which passes is exchanged for a more nuanced analogy: “Great cathedrals,” Manguso tells us, “were built by generations of stonemasons to whom the architect was a man who might once have greeted their grandfathers’ grandfather.” Architectonic rather than linear, this analogy proposes that what we often take to be an isolated moment, an inviolable present—or, in the case of a cathedral, a discrete structure—has buried within its very framework a connection to the past and to generations removed from and obscured by the present. Our temporal relationship to the world is therefore not “ongoing” and linear but architectonic. The present is built upon the past; the past is ongoing in the present.

Concomitant with Manguso’s shifting perception of time are references to motherhood. In a telling passage, she recalls standing at the counter in the kitchen as a child, “knowing I’d be scolded for having taken cookies from the cookie jar.”  For years she considered this her first memory, but, as Manguso prepares to become a mother herself, she questions this assumption. “If I’m to believe the child-care books, the first thing I learned and kept was the identity of my mother.” Of course, Manguso doesn’t actually remember these first memories of her mother, but, despite their latency, traces of them are carried with her into the present, not unlike the traces of the architect in the cathedral.

There is something distinctly psychoanalytic about this idea. In his seminal essay “Remembering, Repeating and Working-Through,” Sigmund Freud suggests that, “…repetition is a transference of the forgotten past not only onto the doctor but also onto all the other aspects of the current situation.” This repetition is, by its very nature, neurotic, as the patient “repeats everything that has already made its way from the sources of the repressed into his manifest personality.” More important, however, this repetition is not a straightforward reenactment of the past; instead, it is symbolically oriented toward the present and requires interpretation. The present, in other words, becomes something of an analogue to the past, not exactly the same thing, but full of traces of past experiences through which the present is interpreted and lived. Maria Talero points out in her essay “Temporality and the Therapeutic Subject: The Phenomenology of transference, remembering, and working-through,” that “…we are always engaged in a process of living the past as present, and the present as past. The psychological past and the psychological present are always, for us, in a state of mutual reinterpretation.”

As Manguso draws closer to motherhood, this notion of time becomes more and more prevalent. Then, shortly after giving birth, Manguso realizes she “used to exist against the continuity of time. Then I became the baby’s continuity, a background of ongoing time for him to live against…My body, my life, became the landscape of my son’s life. I am no longer merely a thing living in the world; I am a world.” As a living world for her son, Manguso’s past becomes part of her son’s present and consequently part of the world through which her son comes to know his own world.

The beauty of such passages lies in the way they resist clean delineation. The separation of Manguso’s world from her son’s world, though necessary syntactically, breaks down in the face of interpretation. Past and present, subjectivity as neatly defined from an other, collapse into one. This is perhaps the point of Ongoingness. The minute we locate ourselves in time, the minute we locate ourselves as distinct, we also locate an entire past, an entire self structured around otherness.

What is exceptional about Manguso’s book, however, is the form itself. This is a book about her journals, but her journals are never directly quoted . Instead, the series of short, almost aphoristic vignettes that comprise Ongoingness reference her journals without appealing to them directly. This parallels Manguso’s emerging conception of time. Like the cathedral holding traces of the architect, like the present embodying the past, Ongoingness holds within its narrative structure a past that is both present and absent.

There is something inherently ironic about the title of Manguso’s book. While Ongoingness: The End of a Diary proclaims the death of her journaling, the book itself ensures that her journaling and diaries still exist despite their new form, or, even more to the point, because of their new form. The distinction between content and form in Ongoingness configures the very geography of Freudian transference. Always our psychological lives are composed of familiar content that masquerades in an ongoing transformation of form. Like motherhood, Manguso’s journals have become a world upon which the new world of her book is built. Yet, again, such neatly delineated borders, while necessary syntactically, lose their efficacy in the face of interpretation. Where, exactly, Manguso’s journals “end” and her new book “begins” is hard to know.

Towards the end of Ongoingness Manguso leaves the reader with a valuable insight: “Perhaps all anxiety might derive from a fixation on moments—an inability to accept life as ongoing.” This brings the reader back to Manguso’s early obsession with journaling and desire for agency over past and present. On the one hand, there is reason to sympathize with Manguso’s early desire for control. To recognize one’s self as ongoing is to recognize, in Lacanian terms, the misrecognition of the self. To see one’s self as ongoing is to understand that there isn’t a distinct self, nor is there a present separate from the past. This is a frightening realization. As Manguso’s anxiety anticipates, without a discrete self the notion of agency is highly questionable.

Yet, on the other hand, within the very idea of ongoingness there is broader freedom; the self is conceived of as something larger than our limited sense of identity. “With great effort,” Manguso tells us, “I could imagine my will as a force that would not disappear but redistribute when I died… And that I needn’t worry about my impending death because the great responsibility of my life was to contain the force for a while and then relinquish it.” While highly literary, Manguso’s book is also about consciousness, spirit, and the vicissitudes of self-awareness. Manguso points out that self-realizations take “great effort” to sustain. Her book imparts camaraderie in the face of such efforts.