You are here: Home / Book Review / Our Education 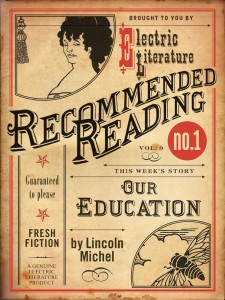 As microcosm of our society, Our Education by Lincoln Michel succeeds in drawing parallels between society and a school in which all the teachers have vanished. The narrator is one of the students stuck in the school, though he clings to the hope that he’ll be able to escape. His faith takes the form of an essay he’s been writing notes for even though there are no teachers to accept his work upon completion. No explanations are provided for the disappearance of the teachers, nor are we given many details about what’s happening outside the school. “I think that most of us believe that time doesn’t really exist outside of the school. Or at least we act like it does not.”

His friendship with Beanpole Paula is the closest he gets to a normal relationship. Yet when she hints at deeper feelings, he can’t hide his longing for Lydia Pill, who represents the illusion of high school panacea, conflicted lust, and the “pill”-like longing for something that’ll never be. In the backdrop is the teachers’ lounge, a dark chamber that serves as the black hole tying in the orbital path for all the students. Some speculate that the teachers have hidden within and are watching the students. “Its doors are bolted shut and it’s the only room or structure that is inaccessible to us. Any surviving teachers must be inside if they remain in the school. We have searched all other rooms and found no bodies, living or dead.” It’s a reverse Eden where the gods are missing and the forbidden apple is a lounge no one wants to go near.

The students scavenge for food, they have sex when they can (though that’s mostly the jocks), and they debate and argue about the teachers. But as times passes, memories fade. “I must confess that I can no longer remember the specifics of any teachers. Their faces are gaps in my mind.” And in reference to items (artifacts) left by the teachers, the narrator speculates: “Is it possible that these articles are not real? That they were fabricated by some unknown force?”

Ontological questions and religious dilemmas pop up when the students in power, the jocks, led by football captain Clint Bulger, refuse to acknowledge the teachers ever existed. The protagonist is even branded as a heretic for clinging to his faith. “You know that worship of the false teachers is forbidden,” he’s told. He’s given a chance to repent of his ways, but his only chance at salvation, Beanpole Paula, has already found a new ‘best-friend.’ She pleads with him to reform and accept he is wrong lest he be exiled. He responds: “I don’t know what’s true and what’s false. I only believe there must be a better, more important place than this.”

As part of the Electric Literature’s Recommended Reading Program, Our Education is a quick, thought-provoking read. The prose is neither cumbersome nor too sparse, perfectly matching the conversational tone of a teenager stuck in a teacher-less school. Those expecting a Twilight Zone episode twist ending need not apply. Those looking for a surprising lesson on the perpetual education we call existence should enroll right away.