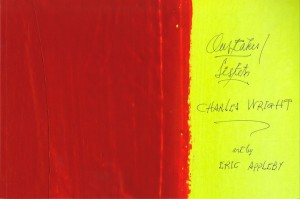 Charles Wright is getting old and he wants to tell you about it. In Sarabande Books’s second artist/poet collaboration, Forklift, Ohio designer Eric Appleby attempts to capture the near-death musings of Wright’s manuscript of sestets. The poems are well titled Outtakes: Sestets as they read like unedited outtakes from the poet’s life and mind, and the sestets appear wet off the typewriter. With a more refined, precise, and edited presentation, Appleby’s images seem to exist separately from Wright’s quick, thumb-deep introspections. That is, while the image/sestet combo successfully avoids one illustrating the other, together they fail to create an identified friction or cognitive dissonance.

Wright’s speaker prays to the Lord of “the ugly chair and the broken sofa, / Lord / Of mouse piss and pack rat shit” to tell him “that things will be all right, (that hell is no certainty.)” But the reader is taken through the stages of life’s “Autumn,” as he refers to that period before death. Imparting knowledge in the closing days of life that “The Secret of What’s Happening” is that “nobody gives a damn.” Comforting himself with nature and musing and making friends with death “to keep it company, / and comb its hair” because it “as sure as hell is” the end or nearly and “pity them” who “have no regrets, not even one.” While the reader could become bored with an old man’s prattling, she sells herself short if she doesn’t examine more closely the bittersweet niche of the aged. Youth, or relative youth, grants the poet freedom from a true consideration of death and a life mostly lived, from the regret of the inability to “master [one’s] own body” or from the inability to “purify [one’s self].” The kibbles of poetic truth come from the speaker’s age; so when he says “t my age” it’s an age conscious of ticking clocks, an age that makes his prattling wise rather than sentimental or trite.

So who buys this book? Do you give it to your grandmother in her eighties? That seems a bit cruel. Ultimately, Wright wins readers by refusing to depress them. The speaker is more curious about the possibilities of the afterlife than about lamenting his inevitable closing. Humor, sentence fragments, brevity, and Appleby’s images can pace the sestet manuscript for a breadth of readers. For those not nostalgically or melancholically inclined, something with more kitsch may better suit their lust for lyrics.