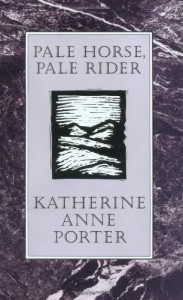 Victorian novelist Elizabeth Gaskell tried to persuade Charlotte Brontë—whose grim experience of the world suggested otherwise—that everybody has it the same in the long run, but in some people’s lives good and evil are blended, rather than coming in “strong patches of light or shadow”:

[Charlotte] smiled, and shook her head, and said she was trying to school herself against ever anticipating any pleasure; that it was better to be brave and submit faithfully; there was some good reason, which we should know in time, why sorrow and disappointment were to be the lot of some on earth. It was better to acknowledge this, and face out the truth in a religious faith. (Gaskell’s Life of Brontë, Vol. II)

The allotment of light and shadow in the literary version of life emerges as a central formal feature in the three stories of Katherine Anne Porter’s Pale Horse, Pale Rider, because when things are good, they are very, very good, and when they are bad, they are horrid. I am strongly biased toward peaceful interludes at any price, portending what trouble they may: Harry Potter gets his mysterious Firebolt; Beorn provides supper and rough clean beds. A great example is the protagonist’s giddy delight near the beginning of John Barth’s The End of the Road:

It began with Laocoön on the mantelpiece, his voiceless groan. The set of that mouth was often my barometer, told me the weight of day; on Wednesday after my interview, when I woke and consulted him with a happening glance, his pain was simply Bacchic! That was something, now! Out of bed I sprang, unclothed, to put a dance on the phonograph while the spell should last. Against all of Mozart I owned a single Russian dance, a piece of Ilya Mourometz, measured and sprightly, lively and tight—there, now, Laocoön!

The dusty maple incandesced; sunshine fired the speckled windows and filled my room with a sparkle of light, and I danced like an unfurred Cossack, spinning and jumping. Once in a blue moon I felt that light—sweet manic!—and it lasted a scant three minutes, till a ring from the phone dispersed it.

The moments of sudden joy, or at least relief from the “weight of the day” in Pale Horse, Pale Rider happen right in the middle of the story, as a kind of negative image of whatever bummer state-of-being the story narrativizes. You get moments—real and sudden lights—of respite. In “Old Mortality,” the heroine walks:

in silence behind her elders who were no longer Cousin Eva and Father, since they had forgotten her presence, but had become Eva and Harry, who knew each other well, who were comfortable with each other, being contemporaries on equal terms, who occupied by right their place in this world, at the time of life to which they had arrived by paths familiar to them both. They need not play their roles of daughter, of son, to aged persons who did not understand them; nor of father and elderly female cousin to young persons whom they did not understand. They were precisely themselves; their eyes cleared, their voices relaxed into perfect naturalness, they need not weight their words or calculate the effect of their manner.

Two people in the story suddenly fit together, in a way that is both miraculous and ordinary. This moment of release shared by the two characters prompts the heroine to ask, “Where are my own people and my own time?”—a return to a given and literarily familiar state of isolation explored throughout the story—but who cares? A sudden pleasure of lateral connection has been named and realized: “contemporaries on equal terms.”

Or take the narrative of personal development offered in a few sentences of “Noon Wine,” a story that has other woes than male pubescence to recount. Two little boys playing in the front yard in the first scene of “Noon Wine” (their mother “had a way of speaking about her children as if they were rather troublesome nephews on a prolonged visit”) suddenly resolve into adulthood:

Nine years passed. The boys grew up and learned to work… They lived through by main strength all the grimy, secret, oblique phases of growing up and got past the crisis safely if anyone does. Their parents could see they were good solid boys with hearts of gold in spite of their rough ways.

To which I say: Thank God. The boys grew up and learned to work. They got past the crisis safely if anyone does. Thank God, they grew up and learned to work, and thank God we’ve passed over the usual ground, the grimy secrecy so central to the Portrait of the Artist as a Young Man and The Catcher in the Rye. With their parents, we can rejoice in their hearts of gold. Even better, in the middle of a subsequent conversation—really, almost unbearable to read in its slow buildup to disaster—their father says, “We’ve all got to be young once…It’s like the measles, it breaks out all over you, and you’re a nuisance to yourself and everybody else, but it don’t last, and it usually don’t leave no ill effects.” It don’t last, and usually don’t leave no ill effects. Hurrah! This story is, in part, about the consequences of a man’s youthful crime, and the father’s doom is brought about in part by a failure of moral imagination in his hardworking boys: at least it also includes a claim (persuasive in the moment), that everyone has got to be young, and usually—usually!—the worst that happens is you get old instead.

In light of these moments of being let off the hook for ironic contrast, it should maybe not be surprising that the climax of “Pale Horse, Pale Rider” is about getting hooked again; packing up your travel-ready, twice-baked cakes to hit the road to Smaug. This story argues, contra Gaskell and, I think, Brontë too, that the bright patches only make things worse in the long run. The golden-hearted boys you raised lack the sensitivity to understand your actions. The title story involves the Spanish influenza and concludes with a painful, disconcerting reentry into a changed world.[1] The heroine awakes to what she’s assured is a beautiful day:

but truth was, she could not see it. There was no light, there might never be light again, compared as it must always be with the light she had seen beside the blue sea that lay so tranquilly along the shore of her paradise. That was a child’s dream of the heavenly meadow, the vision of repose that comes to a tired body in sleep, she thought, but I have seen it when I did not know it was a dream. Closing her eyes she would rest for a moment remembering that bliss which had repaid all the pain of the journey to reach it; opening them again she saw with a new anguish the dull world to which she was condemned, where the light seemed filmed over with cobwebs, all the bright surfaces corroded, the sharp planes melted and formless, all objects and beings meaningless, ah, dead and withered things that believed themselves alive!

This is what rehabilitation to life can cost: bright patches of narrative respite are, as in Elizabeth Gaskell’s metaphor, light opposed to shadow, and, as vivid as they are, ultimately work to show everything else in a dimmer light. Too bad. But also good.

You could offer any soul-tricking oarsman
whatever coin you’re still palming but there’s a divide
between the shores of sickness and the legendary, purifying
river of death   You will have this tale to tell, you will have to live
to tell
this tale