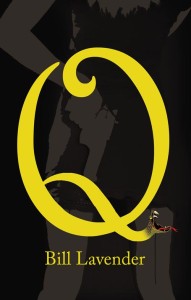 In his introduction to the 1998 Dalkey Archive Press volume entitled Innovations: an Anthology of Modern and Contemporary Fiction, Robert McLaughlin, countering old fuddy-duddy F.R. Leavis, makes the case for a recognition of “innovative” fiction, as opposed to realism, as the wellspring of creative genius in the western literary tradition. The anthology includes a list of imaginative literary visionaries from David Foster Wallace to Djuna Barnes, and McLaughlin’s introduction extends the tradition back to Laurence Sterne, Cervantes, Rabelais, Apuleius. Bill Lavender’s latest work, Q, is firmly grounded in this alternative stream of literary expression that refuses to be tied down by the aesthetics of American literary realism. Like many of the more widely read works of the counter-realist tradition, Q is a work of satire. Though it has affinities with many of the works mentioned in McLaughlin’s introduction, it patterns itself directly on a title McLuaghlin might have but did not include, Voltaire’s Candide.

Like Candide, the eponymous protagonist of Q endures a crazy, I daresay even zany series of unlikely adventures. These include extreme vicissitudes of fortune and a high number of not just unlikely but patently impossible reunions, since characters actually killed in front of the reader’s eyes return later with ridiculously implausible explanations of their survival. Thus narrative convention is satirized equally as much as ideologies underpinning, not only narrative convention itself, but other unexamined verities of the times—Voltaire’s and our own. Voltaire subjects his protagonist to all the abuse in order to refute the facile idealist optimism evinced in Leibniz’ 1710 Théodicée, contained in the idea that the world as it exists must be “the best of all possible worlds” because divine Providence does the best it can, and the world would have to be worse off without it. Besides a similar approach to plot, character, dialogue, and tone, Lavender also directly references Voltaire, most notably at the end, where the same phrase appears: “tend your garden.” In Voltaire’s language, the sentence is “Il faut cultiver notre jardin,” which would appear in a more direct translation as “It is necessary that we cultivate our garden,” or perhaps simply “We must tend our garden.” Of course the key question, for readers of Voltaire as well as Lavender, is what that’s supposed to mean. And the examination of the answer to this question reveals also the difference between Voltaire’s and Lavender’s respective satires as well as eras.

While the target of Voltaire’s satire is essentially religious faith and the way it deprives human subjects of agency and intellectual freedom (by disabling a rational apprehension and discussion of very real injustice), Lavender aims at the affirmative propaganda of his own time. We could perhaps trace a lineage of affirmative social philosophy from Leibniz through Herbert Spencer to the American capitalist triumphalism of our time. Lavender’s critique, therefore, has a far more economic cast than Voltaire’s, though religion, too, comes in for some hilarious skewering. A far more recent precedent for Q is Nathanael West’s under-read 1934 satire, A Cool Million. Like Q, A Cool Million satirizes American petit-bourgeois economic optimism—loosely referred to as the Horatio Alger myth, after the popular 19th Century author of didactic boy’s novels. Q’s father, before hanging himself on the second page, has assured him that he lives in “the best house on the best street in the best subdivision in the land, which happens to be the best country in the world” (13). He has also schooled Q on some ideological basics like, “You’re not doing the beggar a favor when you give him a handout, because you’re taking away his motivation to better himself” (18). Q’s sudden fall from “the best of all possible worlds” (rendered by Lavender as the world of the American suburban well-to-do) is actually more wrenching than Candide’s, because he loses even his name. “Q” is the random letter assigned to him at his first night at a homeless shelter, since he can produce no identification documents. Over the course of the novel, he can’t remember whatever name he was given at birth (and the reader never learns it either).

If Candide is picaresque, Q is ϋber-picaresque, as Q eats out of dumpsters, rides the rails, becomes a Christian glossolalic rapper, gets stranded in “the Dark Continent” (not named in any other way in the book), becomes a mercenary, stumbles into a fortune of millions, gambles it all away, and eventually ends up back at a now abandoned, blighted Provincial Oaks Subdivision. Along the way, as happens also in Candide, the events are scrupulously analyzed, in often esoteric philosophical terms, by a host of migrant laborers, corporate executives, evangelical pastors, homeless bums, mercenaries, naked novelists on the beach, and elevator operators. There are also asides to tell the backstories of various more prominent characters, including the love interest, Lucy, who is sometimes a homeless gutter punk and at other times a jet-setting daughter of an international arms dealer. Q is often the victim of events, but has his moments of triumph as well. After millions of dollars fall into his lap when his mercenary boss’ head and helicopter explode over “the Dark Continent,” he berates the croupier at a French Riviera casino with “My wealth, that I earned by my wits and labor, has been taken from me by a rigged machine” (144). As in Candide, dramatic irony abounds as the reader continually gleans lessons that don’t seem to rub off on the good-natured but not very bright protagonist. The gist of these hyperbolically obvious lessons is that every good boy who works hard and plays by the rules does not, in fact, do fine, and that prosperity in our society is either “a rigged machine” or perhaps the result of a freak accident.

Which brings us back to the question of the elusive meaning of the final line, “Tend your garden.” Though Candide says “We must cultivate our garden” at the end of Voltaire’s work, Lavender does not have Q say it. It comes first from a homeless folksinger, then from the narrator’s own authoritative, though reliably ironic, voice. Whatever Voltaire may have meant, for Lavender the directive has a decidedly anarchist and bohemian meaning. In a world of abusive institutions—political, economic, and ideological—community must be cobbled together in the impoverished spaces where it can hopefully escape notice, and therefore exploitation. While this political level of meaning rings loud and clear, a more strictly literary meaning resounds as an overtone.

The world explored by Q has been allegorical, of course. Indeed, as the naked novelists on the beach in France complain, many of the characters in Lavender’s novel don’t even get proper names, but are called instead by the name of their narrative or symbolic function (e.g. “the Best Friend,” “the Sister,” “the Male Novelist,” “the Female Novelist,” etc.). These characters have embodied a range of philosophical, literary, and aesthetic approaches to dealing with a material world that is patently not stable, secure, or just (in a word, not “good”). The fruits that sustain Q and his fellow victims, in their incessant examination of their condition, are essentially the fruits of the western critical literary and intellectual tradition, imbibed in generous, catholic draughts, including many of the titles found on McLaughlin’s list of imaginative masterworks. (As Lavender’s title suggests, Don Quixote is also liberally referenced in Q’s plot, character, and dialogue, as are many other seminal works). Lavender has chosen to make his literary home in the wide spaces of a historically broad view of literary expression, rather than the crowded elevator of the past five minutes of literary fashion ( whether determined by the commercial literary press or by the academic writer mills of university creative writing programs). Moreover, Lavender farms literary history more in the manner of Antonio Gramsci’s “organic intellectual” than in the exclusive manner of the literary professional, in publishing or academia, since the works he references are the common, public domain inheritance, rather than the latest buzz from literary “tastemakers.” This also betrays an eminently anarchist sensibility. He tips his hand in his imaginative preface, written very much in character with the rest of the novel: “I wish I could handle—especially since so many others seem proficient—a story full of emotion and devoid of political thinking, or a great moral quandary in a bedroom conversation, or any of the many genres that treat the emotional and philosophical tribulations of the upper middle-class American. But I have neither the gift for scatology or a reviewer in my pocket” (5).

I’m happy to announce that Lavender has one itsy bitsy reviewer, at least, who is happy that Q didn’t aim for a National Book Award nomination. I suppose those of us with a different view of the possibilities of literary expression will just have to tend our garden.