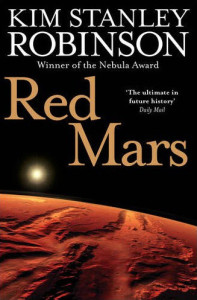 Kim Stanley Robinson’s Red Mars is probably the book that most science fiction aficionados think of when they think of hard Sci-Fi—that branch of science fiction that concerns itself only with the plausible. That means no aliens, no time travel, no intergalactic planet-hopping. Essentially hard Sci-Fi is an author’s prediction, which means the book is only good insofar as the reader trusts the author to be incredibly intelligent and well-informed about all things scientific.

I went into Red Mars trusting in Kim Stanley Robinson. He is an eminently reasonable man, who, through his calm, assured manner, gives English PhDs a good name. See the speech he gave at the 2012 San Francisco Humanity+ conference for an example of how reasonable he can be. He calmly skewers some of the more fantastic ideas of the transhumanism movement by encouraging the movement’s members to use science to solve the problems of climate change and unequal opportunity rather than working toward technological self-deification. He takes issue with the name of the movement: “Humanity Plus, but it has to be, maybe, Humanities [Plus] or maybe has to be All People [Plus] or it has to be Seven Billion Plus.”

The video is sort of heartbreaking because, while watching it, I imagine myself as a transhumanist at this conference where Robinson was a keynote speaker. I imagine that as a scientifically minded transhumanist I would revere Robinson as one of my heroes and I would be crushed to hear him telling me that my entire idea about progress is fundamentally flawed.

That speech, in fact, echoes some of the same concerns of Red Mars. Robinson uses his novel’s set-up as a way to explore big issues about human governance and the weight of history. He’s at his best when pitting those who wish to terraform Mars against those who believe it should be kept pristine.

The chronology of the novel begins in 2026 with one hundred humans packed together in a spaceship learning to get along. The space flight is told from Maya Toitova’s perspective, but by the time we land on Mars, we’re with a new character, Nadia Chernyshevski, who really loves to build things.

Every time Robinson switches characters the reader gets a new perspective on the colony and its politics. Arkady Bogdanov thinks life on Mars needs to be non-capitalistic and free of Earth’s influence. Sax Russell thinks life on Mars needs to contribute to the planet’s terraforming. Frank Chalmers thinks he should be in charge. And Nadia wants to build more settlements. I felt the same way about these character switches as I did about the switches in Jonathan Franzen’s The Corrections. I could never imagine that I would ever like the latest character as much as I liked the one before, but then I did. I was drawn in. I saw things from a new perspective. There were no villains, only humans.

The First Hundred, however, are never as compelling as the Lambert family. They are refreshingly selfish and amoral and always realistic. But they are all basically humorless and show their humanity through their sexual relations rather than any sort of comedy or folly. The few times that any of them attempt to be funny, they aren’t. And they’re all too super-heroic to make a stupid mistake or want something they shouldn’t, which is what makes Franzen’s characters fun.

Of course, this is probably only realistic. The characters in Red Mars are the crème de la crème of Earth society. They are the boy scouts and girl scouts who grew up to be astronauts. They’re all the best at what they do and they’re all driven. Which, frankly, can get a bit tedious.

For me, the novel crested when the murder of John Boone, which begins the novel, became a mere mental hang-up for its perpetrator. I would have gladly read about the implications of this murder and the investigation surrounding it for another two hundred pages, but instead the novel expands to disaster movie proportions and from then on was as interesting as Armageddon or Twister.

Toward the end, the novel becomes the author’s sandbox where possible, well-researched scientific ideas can be tried out via realistic characters. The sheer number of these ideas means that science on Mars develops so quickly that that it might as well be magic. The First Hundred fly around in cool gliders and send out robots to grab an asteroid which will serve as a counterweight for a space elevator. Technology is not the result of thousands of human-hours, but of mere imagination.

When the inevitable Martian Revolution begins, Robinson shows the destruction the freedom fighters wreak on the infrastructure such as the aforementioned elevator. Then he one-ups himself by bringing down Phobos, Mars’s largest moon. This is accomplished through secretly embedded rocketry and while, perhaps technologically plausible, this stunt marred the end of the book for me. (Pun intended.)

Yet Robinson’s scientific reasonableness remains, and I still have the sense that despite the book’s seemingly passé Cold War themes and a timeline that is far too ambitious, there is no better window into our future than Robinson’s novels, which serve as a literary counterweight to the tiresome and dehumanizing techno-boosterism so pervasive today.

Hunter Welles, formerly of Louisiana, now lives in Minnesota, where he earns his keep as an odd-jobber. His debut science fiction novel, Solomon the Peacemaker, is published by Cowcatcher Press.