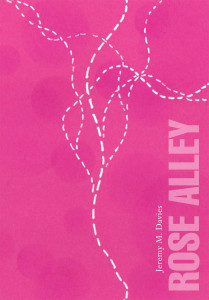 Jeremy Davies’ debut novel Rose Alley is a conundrum of the delicious sort. Rose Alley defies containment, and Davies seems to have deliberately written an unfilmable (and unsummarizable) narrative on the subject of filmmaking. Readers will find themselves caught somewhere between the lyricism of Faulkner and the timeless character studies of Chaucer. And perhaps that’s where one should begin—Rose Alley is effectively a composite of character studies, lyrical and poignant, with priorities set not on a narrative arc, but on capturing the vagrancies of the human condition.

Rose Alley is divided into thirteen chapters, with each chapter encapsulating a character. Often a character mentioned in passing in one chapter is later awarded a chapter of his or her own—sometimes, the reader discovers parallels between narratives, and sometimes the reader will be forced to hurtle gaps of a hundred or so pages before discovering a sense of meaning in a particular character’s introduction. (Davies was kind enough to include an appendix.) Appendix aside, this formal move forces the most stubborn of readers to cease the search for a linear thread, and to embrace the riveting turbidity of Davies’ prose. “Filmmaking” functions as the narrative conceit—the novel opens, closes, and touches throughout on a filming project in France during the riots of the 1960s—and the character studies read like unedited, unorganized, candid snippets of film. As a result Rose Alley comes across as a finely polished body of prose left intentionally unfinished.

There is of course the question of whether or not the hurdles Davies sets out for his readers will be off-putting for all but the most patient. At times Davies awards his reader too much faith, and those readers who seek a narrative structure that will take and guide curious strangers by the hand will doubtlessly become frustrated by Davies’ approach to narrative structure, which keeps a steady distance of 100 (and sometimes, it seems, 1,000) yards ahead.

The real gem to be found here is in Davies’ mastery of syntax, in his ability to capture so many different dimensions of humanity within the confines of a single sentence. Readers will delight in hauntingly accurate caricatures of generational gaps: “Eugenia called it rape plain and simple—the reason she’s taken her mother’s maiden name, despite its own distasteful association […] But Hannelore just shook her head and smiled, as though rape like rock and roll had been invented by a generation of faddish malcontents, beyond Hannelore’s comprehension and—any-way—beneath her notice” (98); and syntactical plays: “The fevers and insomnia marking 3 A.M. to dawn the optimal time for sleep, the wounded bristled too at the earlier dawn come spring, and asked Wilhelmina to institute a local ‘darkness-savings time’—to keep the hospital an hour ahead of the surrounding townships, with the soldiers’ bones thus an hour closer to knitting—and to paint the window black” (74); and quaint lyricism: “The dead shall live, the living die. Music shall untune the sky” (167). Questions of patience aside, Davies’ real bravura emerges in his sweeping approach to various syntactical and stylistic techniques, which nonetheless read with impressive fluidity.