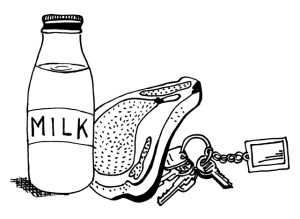 I always thought I was sick. I’d turn my head toward the window where the wind chimes swayed and beneath them baskets of crayons, the teapots we couldn’t fill with tea. Just cold water, they’d tell us. There was a hall fountain where all the girls lined up with their kettles, ready to fill them and sit with one another and eat shortbread. For a moment I’d feel a pressure behind my eyes, just a moment, but it could grow to be longer, I thought. In the afternoons, they’d give us milk in tiny cartons that we’d pour into plastic cups that were minty green and ridged for small hands. We were always quiet for the younger children who were asleep under the tent of old blankets the teachers had sewn together with pins. The milk never made my stomach hurt but I thought it did. When I pressed my hand there to try to settle it, or to my head that wasn’t pounding, they’d let me sit on the nurse’s bench with warm towels pressed where I said the pain was, as they dialed the number to our house.

I waited and watched the cars from the road, driving slowly. The leaves, when there were leaves, were always shuffling, showing the dulled sides.

The nurse would sometimes graze my forehead with the backside of her fingertips. I’d wanted someone else to touch me. If I closed my eyes, I could imagine the sound of his keys that were jangling from a belt loop.

The nurse always looked at me with that look. Where her eyebrows would furrow, she’d bite her lips once quickly and take a deep breath.

We knew it wasn’t happening. It had been all over the local newspapers.

We both knew I just wanted my father to come get me.

My mother always came in the same long sundress and sweater, her hair pulled back in a clip. Once she wore two left tennis shoes and shuffled to the door of the school, pulling her clothes around herself. Back then she was mostly on the couch in her underwear, the fans turning from the windows, the sweat on the back of her neck making her hair stick. When she came to get me, she’d hold my hand and we’d walk down the hallway together where the other girls could look up from their tea tables and finger paints and watch me leave.

Being home wasn’t much better because we were still alone. There was never enough food in the refrigerator. There were his water glasses left out on all the tables. For a while she spent most of the evenings talking Swedish into the kitchen phone, wiping the tears from her face with the t-shirts we cut up for dishrags.

For a few months she sent me to Aunt Elsa and Uncle Roy’s in the mountains where I slept with their yellow labs on a rug in the den. She made up a bed in what would be the nursery, laying pink blankets over a cot mattress on the floor between the cribs. I tried to sleep there but I couldn’t. At home, I was always pulled tight against my mother’s breasts, sinking into my father’s side of the bed, the impression of him still there like a crater.

Most nights, Aunt Elsa cooked meatballs with gravy and rice and sat at the table until my bowl was clean, even if it was growing dark and her ankles were sore. She wore an apron over her pregnant belly and let me rest my ear against it so I could feel the kicking. There are four feet in there, she told me. By the time the twins came, I would be gone.

If I was lucky, Uncle Roy took me out in his landscaping truck where there were shovels and mowers and everything smelled mossy. We’d share a walnut sundae by the baseball fields and watch the fireflies come up from the grass. His skin was oily and always stained with something dark but his teeth were big and white and clean. Aunt Elsa once said he had a smile that could undo a woman. I didn’t know then what it meant. I tried to picture his hand on my forehead, the big knuckles that were always nicked, the calluses from the mower wheel or rake handles. I thought I could want that, I would take it from him to pretend.

We weren’t far away from one another but my mother still sent me letters. Aunt Elsa read them to me after soaking in the bath. In the letters, she asked about things like school and didn’t tell me anything about herself, only that she missed me. I drew pictures to send back to her, mostly they were of the dogs, the colors going all outside of the lines. On Sundays, my mother drove up for family dinner. I heard Aunt Elsa force her to over the phone.

Go take a shower for Chrissakes, she said. Pick up the damn car keys. You need milk. You need red meat.

She never ate much but she’d sit with me on the couch and let me put my head in her lap, moving the hair out of my eyes from when I was crying too much. When she left, they only told me, Your mother’s sick, is all. Just wait until she gets better. They said, You don’t want to get sick, too, do you?

He’d only been dead for a few months. The dogs’ backs were warm and full of slow heartbeats. Even at five, I knew it was all senseless. I’d already caught something from her.

Alissa Riccardelli received an MFA in Fiction from Sarah Lawrence College and graduated with a BA in English and Creative Writing from Manhattanville College. Her work has appeared in Lumina, The Listening Eye, Nano Fiction, and Stumble Magazine. She currently lives in Queens, NY.