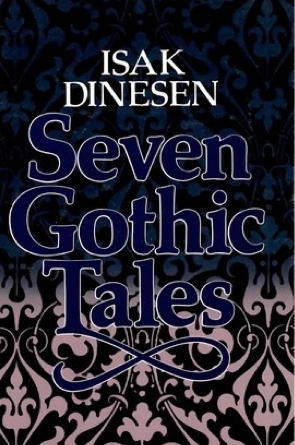 Seven Gothic Tales is a set of enchanting stories in late-modernist prose by Isak Dinesen.  From the Random House synopsis:

Originally published in 1934, Seven Gothic Tales, the first book by “one of the finest and most singular artists of our time” (The Atlantic), is a modern classic. Here are seven exquisite tales combining the keen psychological insight characteristic of the modern short story with the haunting mystery of the nineteenth-century Gothic tale, in the tradition of writers such as Goethe, Hoffmann, and Poe.

The worst thing to be said of the tales by a reader of my prejudices, and it had better be said at once, is that they are long short stories or short novellas (six of the seven are over fifty pages long, and two of these are more than eighty pages long). This may not be to all as it is to me: If, as an English professor, I am grateful to be able to assign George Eliot’s The Lifted Veil or Dickens’s A Christmas Carol, in private life I contemn a form that is often too long to be short and too short to be satisfying.  And here I find how wrong I am to generalize: the long-short-story or “tale” seems to have been created for these stories, which are stories in the highest sense, possessing both one-thing-after-anotherness and a coherence of theme and language—and do not fall into the trap of either having a point or not having a point. They move subtly, nimbly, are even (help me) panther-like in their stretching and lounging and stalking and in their silent, decisive leaps.  There is space, in these stories, to turn, or, as we say of plot—to twist.

These tales have twists rather than “acts”; only two impose formal divisions on the unfolding narrative. The anecdote that (Danish) Dinesen tells about their publication in this 1954 interview from the Paris Review gives a sense of how she skims across time and space, suddenly lighting somewhere quite particular:

Yes, I shall never forget that [the Americans] took me in at once. When I came back from Africa in 1931, after living there since 1914, I had lost all the money I had when I married because the coffee plantation didn’t pay, you know; I asked my brother to finance me for two years while I prepared Seven Gothic Tales, and I told him that at the end of two years I’d be on my own. When the manuscript was ready, I went to England, and one day at luncheon there was the publisher Huntington, and I said, “Please, I have a manuscript and I wish you’d look at it.” He said, “What is it?” and when I replied, “A book of short stories,” he threw up his hands and cried, “No!” and I begged, “Won’t you even look at it?” and he said, “A book of short stories by an unknown writer? No hope!” Then I sent it to America, and it was taken right away by Robert Haas, who published it, and the general public took it and liked it, and they have always been faithful. No, thank you, no more coffee. I’ll have a cigarette.

Consider the pacing: 16 years in Africa are compressed into one dependent clause; the reported conversation, nearly half the paragraph; American success, one sentence; the evocation of the speaker at the moment of speaking, two final sentences.  Poet Elizabeth Gramm points out that the analogy extends to the way these stories “unravel, uneven in the events and ways of time leading to time (or backwards).” The novella is perfectly suited to this flexibility of the story in time; much is compressed and much carefully delineated. Virginia Woolf wrote of Elizabeth Barrett Browning’s unpromisingly long novel-in-blank-verse, Aurora Leigh:

At any rate we cannot read the first twenty pages of Aurora Leigh without becoming aware that the Ancient Mariner who lingers, for unknown reasons, at the porch of one book and not of another has us by the hand, and makes us listen like a three years’ child while Mrs. Browning pours out in nine volumes of blank verse the story of Aurora Leigh.

To consider how these stories move from point to point, I think it’s best to show how the first story of the collection begins. The first tale—“The Deluge at Norderney”—begins at a seaside resort in the late nineteenth century, when “seaside resorts became the fashion, even in those countries of Northern Europe within the minds of whose people the sea had hitherto held the rôle of the devil,” and where:

Old gentlemen dug themselves down into political and dynastic discussions in the club, their glasses of fine rum at their sides; and their young wives walked, their cashmeres on their arms, to a lonely hollow in the downs, still sun-baked from the long summer day, to become one with nature, with the lyme grass and the little wind-blown pansies, and to gaze straight up at the full moon, high in the pale summer sky.

The deluge “began on an evening of more than ordinary heavenly calm,” which becomes a night in which “the people who were not kept awake by the beating of their own hearts woke up, terrified, by a new, swiftly approaching roar. Could their sea now sing in this voice?” And the story turns into a story of the “flood of the Cardinal,” a man of whom, “wherever he went, it was believed of him that he could work miracles.” On a mission of rescue among the flooded houses, the boats:

rowed straight in amongst fallen buildings, and the women jumped into the boats from the house roofs, their children in their arms. From time to time he spoke to them in a strong and clear voice, quoting to them the book of Job. Once or twice, when the boat, hit by heavy floating timbers, came near to capsizing, he rose and held out his hand, and as if he had a magic power of balance, the boat steadied itself. Near a farmhouse a chained dog, on the top of its kennel, over which the sea was washing, pulled at its chain and howled, and seemed to have gone mad with fear. As one of the men tried to take hold of it, it bit him. The old Cardinal, turning the boat a little, spoke to the dog and loosened its chain. The dog sprang into the boat. Whining, it squeezed itself against the old man’s legs, and would not leave him.

And the story turns into a story of four who volunteer to take the place of the last boatload of evacuees: the cardinal; two ladies who, “although they behaved in the midst of danger with great self-control, gave nevertheless that impression of wildness which, within a peaceful age and society, only the vanishing and decaying aristocracy can afford to maintain”; and a “young Dane, Jonathan Maersk, who had been sent to Norderney by his doctor to recover from a severe attack of melancholia.”  The maid of the elder lady volunteers to stay with them but is dismissed:

her mistress cast upon her the sort of glance by which you judge whether a person is likely to make a satisfactory fourth at a game of cards. ‘My pussy,’ she said, ‘nobody wants you here. Besides, you are probably in the family way, and so must hold on to futurity, my poor girl. Good night, Mariechen.’

If a story can be said to begin after thirteen pages, here it begins—by becoming a series of stories about each one of the party—with a moment of poise when the rescue boat, “fading from their sight, became one with the sea and the air”:

As if they had been four marionettes, pulled by the same wire, the four people turned their faces to one another.

“How will he do to dance with?” a young girl asks herself, when, at the ball, the Chapeau is presented to her.  She may even add: “How will he do as a beau, an Épouseur, the Intended of my life?”

“How will these people do to die with?” the castaways of the hayloft, scrutinizing each other’s faces, asked themselves.  Miss Malin, always inclined toward a bright view of things, found herself satisfied with her partners.

Left thus alone, they tell stories, of themselves and one another: a daughter whose misogynist uncle raises her in a house in which “she knew that she did not exist, for nobody ever looked at her,” until the day in which she sees herself in one long moment, through:

an enormous old painting which had grown dark with age, but in which the lighter parts, illuminated by her candle, sprang out.  It represented a scene out of the life of the nypmhs, fauns, and satyrs, with the centaurs, playing in groves and on the flowery plains.  It had been brought, many years ago, from Italy by one of the old lords of the house, but it had been thought a very indecent picture even before the time of the present Count, and had been removed from the living-rooms.  It was not a well-painted picture, but there were a lot of figures in it.  In the foreground three young naked nymphs, silvery as white roses, were holding up branches of trees.

‘But when the Baron heard…of your spitting at the door of his house, he became very grave.  ‘That,’ he said, ‘I did to my father’s door, to the door of the Gersdorff Palace of St. Petersburg.’ He at once sent for his lawyer, and drew up a document to acknowledge you as his son[…]’

Things happen in the hayloft, too, for the next 63 pages, until the dawn begins to break. Gramm again: while the story unfolds against a “sense of water rising…you sort of forget that, as a reader. As those in the hayloft do, too. Or you forget the particular reason for your dread.” That is, one effect of the masterful pacing in the Seven Gothic Tales is—simply—that it creates suspense. Other stories in the collection are gothic in theme, as well—they include a peculiarly powerful Prioress, a “noseless storyteller” of “great fame,” a skull of “rare beauty,” and a ghost who visits Elsinore (a brother, not a father)—but the most gothic thing about these tales is that they create a powerful need to know, moment by moment, what happens next.  These are stories about the power stories have to hold a listener—and they are also stories in which things happen. And they are very, very good.