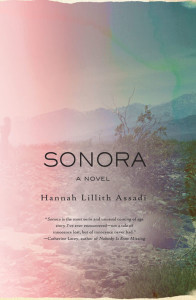 Hannah Lillith Assadi’s debut novel, Sonora, is a kaleidoscopic venture for the senses. Like a video montage set to the timbre of desert wind chimes, Sonora tells the story of Ahlam, an aspiring dancer and daughter of a Palestinian refugee and his Israeli wife, who suffers from an identity crisis further exasperated by her reputation at school. It is with Laura—a coquettish dreamer with an equally-complicated home life—with whom Ahlam feels she has at last found a home, forming an inseparable bond and experiencing together the mysterious deaths of classmates, the inexplicable lights that dance across the desert nightscape, and the emotional repercussions of falling in love.

Moving between past and present, Assadi uses the months of August, February, April, and then in the end, October, as beacons illuminating the passage of time. The present narrative thread—a hospital room—is interspersed with flashbacks of Ahlam and Laura’s burgeoning friendship, beginning with shared memories of the desert, then leading into the sexual-awakening of their teenage years before culminating to a chaotic new life in New York City. Like liquid across the page, the writing is comparable to an abstract painting with no hard lines or edges, just strokes and strokes of watercolor:

The Saguaros were everywhere scattered like crucifixes against the sky, endless and ancient, and in the half-light cast human shadows on the dust. Their arms were cast forth, cheerfully upright, blossoming come April, until dying or struck by lightning and stripped to skeletons

The book captures the desert’s multifaceted temperament, where thunderstorms and lightning strikes complicate the novel’s overarching search for home. While the fragmented narrative pairs well with the lyrical writing, at times the story’s larger scope becomes lost in heady passages and it becomes difficult to discern the force behind Ahlam and Laura’s actions and how their relationship informs Ahlam’s identity into adulthood.

Questions of displacement are sewn into the novel’s fragmented narrative, Ahlam often drifting between the desert and the city, between her Jewish-Palestinian heritage and her American upbringing, using this sense of displacement as reason for seeking a home in her friendship with Laura. Ahlam’s father serves as the portal through which Ahlam experiences the complexities of her Palestinian heritage:

“Silence is my first memory,” he would say. “My mother had her hand over my mouth to muffle my cries. What baby is not allowed to cry at birth? That is silence. That is real silence. Do you see how lucky you are? A child in America. No war. Just peace and prosperity and a beautiful, big desert to play in.”

With the exception of Ahlam’s father, male characters are reduced to fragments of memories, or even rungs on the stepladder toward self-discovery, allowing Ahlam and Laura to explore the raw and unapologetic world for themselves. This is an intentional move on Assadi’s part where she widens the gap between male and female characters as a way to position the female protagonists in the foreground. While both female leads are flawed in different ways, these flaws are the source of connection between character and reader, rendering an empathy based on nostalgia for lost things: time, friendship, and youth.

Sonora is an artful construction by a writer of wondrous talent. Hannah Lillith Assadi’s debut novel is an ambitious exploration of landscape, displacement, and the inner-machinations of female friendship. To read Sonora is to be reminded of our human instinct for recklessness and the people and places we are willing to endure in our endless search for belonging.

Born in Guatemala and raised in Arizona, María Isabel Alvarez received her MFA in fiction from Arizona State University. Her writing has been published in Black Warrior Review, Sonora Review, Colorado Review, Gulf Coast, Arts & Letters, and Puerto del Sol, among others. She is the recipient of fellowships and grants from the Tennessee Arts Commission, the Sundress Academy for the Arts, and the Hedgebrook Writers Residency. Follow her on Twitter: @maria_i_alvarez