You are here: Home / Book Review / Sons and Daughters of Ease and Plenty 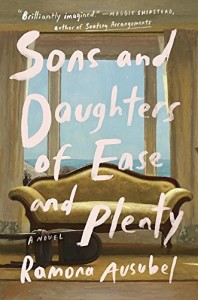 As I started to read Ramona Ausubel’s latest novel, Sons and Daughters of Ease and Plenty, I prepared myself for yet another romp through the lives of privileged East Coasters. Too often these books rely on exotic locales, from remote islands to exclusive New York cocktail parties, to keep readers interested in characters that are shallow. Sons and Daughters of Ease and Plenty is not one of those books.

The novel shares similarities with recent titles like The Nest by Cynthia D’Aprix Sweeney in that it centers on a once-rich family’s loss of wealth. This can be a hard sell for readers unless the book acknowledges privilege and digs deep to explore the potential for characters to experience transformational change. Ausubel does this in prose that is both whimsical and expansive.

The story begins with a family unmoored, as Fern discovers her family fortune is gone. When this loss of funds threatens to force her husband Edgar into the family steel business, Edgar embarks on an ill-advised affair with a woman named Glory, who he meets at the market.

Unsettled by her husband’s infidelity, Fern embarks on a cross-country road trip with a man who suffers from gigantism, who she meets when they perform a mock-wedding for the residents of a nursing home. She leaves a note for Edgar assuming he will take care of the children. At the same time, Edgar leaves his wife to go off on a sailing trip with Glory, assuming his wife is home with their three children. Fern muses:

She pictured the children in Edgar’s care. Fern took pleasure in the thought that he would screw things up, that a note would be sent home from school reminding him of whatever he had neglected.

This is a familiar scenario, children suffering at the mercy of their parents, but the children, like their parents, seek to create a new reality. The children, led by the oldest nicknamed Cricket, play out an old West fantasy living in a tepee in the backyard, wearing headbands, their faces painted with their mother’s lipstick.

Ausubel doesn’t shy away from depicting the insularity of the once well to do family at the center of her story. Early in the narrative, Edgar ponders his life:

Even now that he was grown he could smell the limousine and he could smell the city outside. His had been a wished-for life, something viewed by everyone else from a great distance, and to voice even one experience of difficulty, of loneliness, was not welcome. Being rich had felt for Edgar like treading alone for all of time in a beautiful, bottomless pool. So much, so blue, and nothing to push off from. No grit or sand, no sturdy earth, just his own constant movement to keep him above the surface. It was easy to hate riches when they surrounded him, but Edgar did not know how to be any other kind of person. He did not know that in every life, the work of want and survival was just as floorless, just as unstopping.

The story alternates between present day action and flashbacks of Fern and Edgar’s courtship and early married life. The reader sees their sometimes failed attempts to broaden their horizons, including a move to Kentucky where they befriend a black miner and his family, only to have the miner perish in an accident.

While there are trappings of wealth, a house on Martha’s Vineyard and a boat, the story is anchored by a larger view of the responsibility that comes from privilege and the importance of deciding who you want to be in relationship to your family and the world.

Occasionally Ausubel breaks up the narrative with text that pulls the camera back to explore larger issues of social evolution. After the section with the children in a tepee in the backyard, she writes about the removal of indigenous people from the land by the spread of diseases and slaughter. Cricket imagines teepees and:

Sons and Daughters of Ease and Plenty is the story of a family’s search for identity, both together and alone. As the story closes, Fern and Edgar grapple with their expectations of each other and the world and come to decide who they want to be now in the face of changed circumstances. After reading Ausubel’s prose, I came away examining the true nature of the American Dream and the lies we tell ourselves to justify the pursuit of personal dreams.