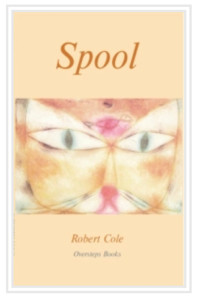 Robert Cole has published two small collections of poems: Inheritance published by Mandeville Press (1995) and Cafard published by Community of Poets. His first full-length book Spool was published in 2013 by Oversteps Books. He was an editor of Chimera for ten years. Spool is made up of 46 poems, many of which have been published in journals such as Van Gogh’s Ear, Poetry Wales, New Statesman, Gargoyle, Swansea Review, and Oxford Poetry. His writing has been championed by mentors and poets in the USA and in the UK, and his poems have been anthologized in both places. From a very early age he surrounded himself in his father’s art. Cole lives in Cotes du Armour, Brittany.

Spool might have been called by a less imaginative poet “Photo Album.” However, spool implies a roll of negatives perhaps or a short film strip in a series of single shots on a projector screen. Each of the poems seems a snapshot of the poet in places he has visited: India, Mexico, France, and Belgium. The poems are conscious about the use of surreal imagery within them. The first poem “Mars in Scorpio” calls our attention to photography in the first stanza’s “like a missing person’s photo.” The last poems photography is implied in “Acid Head” where “Dan had watched G.I.s on an old reel” and “ID” where the question of identity arises even with “iris recognition” and finger prints. The book leans heavily and wonderfully on detailed images. At their wittiest the surreal imagery dances as if written by one of Nietzsche’s Cosmic Dancers.

I find the title apt for the self-conscious poems that while rooted in personae experiences do not sacrifice language. The ironic wit and rich lexicon used in these poems balances the conventional persona approach to the point of tipping many of the poems toward language-based poetry. In fact, I would go so far as to say that the book could be a bridge from the personal experience to language poetry and back again.

For a full measure of the poet’s classical lexicon and ability to play with language, the reader need only to turn to pages 10 and 11 where the poem “Rubbish” reminds the reader that “like the Alexandrian library / That Callimachus faithfully catalogued / To be burned on a quay” our time for study and organizing and crafting will come to “the confessions of Nero.” This warning about the fate of the efforts of humans isn’t forgotten when considering “Curriculum Vitae” where “The university of the future” seeks a “mappemonde plotter” in hopes of “revelations and antecedents,” perhaps in “The department of metempsychosis.”

By the time the reader gets to “Hello Dali” s/he is prepared for the surreal rollick that Cole provides in a description of the painter’s canvases and methods where Dali is “Licking / his detached lips, his skull sodomises a piano, Salvador maims a drawing pin-head . . . an abacus of sweat / straight from a worm-eaten Stradivarius, . . .” And later the reader meets “A dead-ringer / for Ezekiel, another Salvador D razors the original / from the picture, leaving a man-shadow, . . .”. Dali’s surrealism is given its due with a post-modern twist. Even Dante suffers Cole’s playful contrapasso in the poem named for him that begins “I go out in Elysian shades / Traveling on the Metro / Writing my Divine Comedy / Living in the Latin Quarter” where the wit plays with history, the languages (French, English, Italian), the metaphysical, and the material.

But as this review stated earlier, the book has balance of honest straight-forwardness. Before the reader is “poodled off” by a television show, he should consider, perhaps, a second or third reading such poems as “Exile,” “Immolation,” “Emergency,” and “Acid Head.” The last poem of the book “ID” poignantly settles the argument about the development of photography more clearly than Antonioni’s “Blow Up.” These are not “selfie” photos or “selfie” poems by any stretch of the imagination, as witty as they are. The graphic and risky poem “Reprisal” that begins with “These fields weren’t rape-seed yellow fields” gives us confession without “cowardice.” That first line leans on language to bring the honesty forward from the wit it feigns.

I can’t review this collection without bringing up the “unspooled” for the unschooled: A kind of atonement and homage all rolled into one. When writing from a language base, concrete details are very useful. Of course, those concrete details also make the imagery of the poem surreal or not. The interlocking of language and image may be the keystone between personae and experience centered poetry and that of the ironic language-based poetry. Consider the opening lines in the poem on page 39 where the poet reels-in time to reach for his father, a fellow craftsman of poetry.

He picked the rusty thread out with tweezers,
Examined it like a fly in honey.
The escapement unspooled, glinted
Under his reading-lamp lashed to the socket.

The first stanza of “Mending” clearly sets the reader up for the warm playfulness in images and language in the rest of the poem, down to “wound in a sweetheart’s locket.” The poem’s detailed language of his father repairing a watch reflects the craftsmanship of his father and Cole. I am not certain why this book took so long to get into print, but I am glad that it has. There are poems also finely crafted that I haven’t mentioned of course. I leave them for the discovery of poetry readers.