You are here: Home / Book Review / Standing Still in a Concrete Jungle 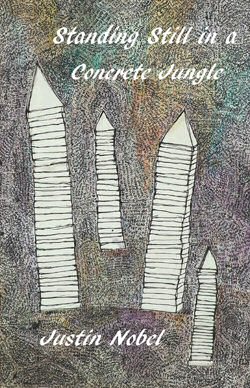 Justin Nobel’s autobiographical psycho-geography of New York is at turns disciplined and whimsical, insightful and playful. Structured around eleven site-specific observations or reflections, the book sketches an impressionistic map of the boroughs, taking account of archetypal characters and anomalous visions alike.

Standing Still in a Concrete Jungle reads almost like an outsider art project, secretive and deeply personal—but then, it’s also just a book that anyone can buy on Amazon for $12. And this realm of contradiction is what Nobel seems to revel in, stumbling upon everyday juxtapositions of the mystical and the mundane, deep history and fleeting energies.

Nobel’s writing is lucid and fresh, a sort of alchemy of sustained attention and free-association speculation. So a stakeout at a hipster Brooklyn coffee shop swerves suddenly into “the sudden urge to be knee-deep in a clear creek.” A slow vertical adventure in a Chelsea elevator turns up a question and an epiphany: “When did we begin bubble wrapping art? Art is free, it is all around.” Hanging out in an ER waiting room in Manhattan prompts a query: “Might waiting itself be the cause of the disease? Perhaps, it is the cure.”

While some of Nobel’s musings may smack readers as pompous or naïve, the careful reader will notice something else going on: a kind of sincerity and humility that resonates with the works of canonized American authors such as Henry David Thoreau and Willa Cather. It’s startling to see this kind of directness, particularly when not embedded in the consciousness of a fictional character, or located outside the context of a pre-approved text. But it is no less poignant when it occurs, and it occurs often through Nobel’s project, such as when, “in the food court, skylights rain sunlight, creating the feel of a cathedral and illuminating an elderly couple eating a Burger King lunch.” Is the fast food lampooning the sacred ambience, or weirdly accentuating it? Nobel invites us to linger in the uncertainty.

Standing Still in a Concrete Jungle is not really about standing still at all: it’s about going for a ride, and being up for all the unexpected encounters along the way. It’s about a place, and within that place, a bunch of non-places. It’s a place-based study that lends itself to endless translations and adaptations—it’s like a philosophy for anywhere.