You are here: Home / Book Review / States of Motion 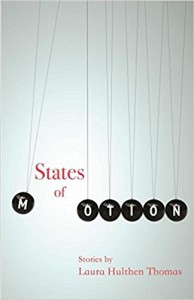 Laura Hulthen Thomas displays a wide range of skills in the haunting stories that comprise her debut collection, States of Motion, published by Wayne State University Press as part of its Made in Michigan Writers series. Thomas delivers complex yet accessible characters who inhabit places vividly rendered: a honeybee-sprinkled field, a farcical fortune teller’s den, the interior of a shoddy driver’s ed sedan, a family diner replete with a Picasso-esque nude painting. The book contains eight stories that are delivered in smooth, smart prose that reveal an author in command of the worlds she creates. These lengthy fictions are so detailed—each with layered characters, rich plots, and satisfying closures—that they read like small novels.

In the opening story, “Warding Charm,” twelve-year-old Emily is as innocent and vulnerable as the bunny she receives as a gift from a family friend; she immediately takes the animal to the garage, sliding its “cage on a low shelf tucked in dust and gloom.” Emily by turns overfeeds and starves the pet, exposing her feelings of conflict and betrayal as her parents, distracted by their own crises, remain oblivious to her suffering.

Betrayal is a predominant theme in the book. In “State of Motion,” a mother’s aversion to her family’s distress undermines her relationships with them, resulting in a painful distance of which she is fully aware yet powerless to control. Her turmoil, one of numerous conflicts set against the fascinating backdrop of a miniature airplane competition, reveals how we can be disloyal even to those we deeply love.

“Adult Crowding” features betrayals that are both comical and heartbreaking. An elderly woman whose son fulfills her lifelong wish for braces bites him, her teeth clamping down and imprinting on his skin “like a craggy oval…[the] bracket’s smug dimple smack dab on each tooth mark.” The wound bleeds and seeps throughout the story, reminding the man of the prevailing treacheries in his life: the teens he instructs as a driver’s ed teacher represent his lost youth, their blossoming romance a censure of his failed marriage, the restaurants of his childhood fade into shabby, alien shopfronts, the Gold Star sedan maintains an indeterminate, maddening rattle. Here, as in several of the other stories in the collection, Thomas displays her skill at rendering authentic and heartbreaking adult/teen relationships.

In other stories, an elderly man pines after his son’s daughter, a slumlord subjects his desperate tenants to life-threatening property conditions, and a lab technician is tasked with euthanizing the animals that have come to trust her. Betrayal and fear—of invasive bats, of youthful psychics, of blind turns in the road—are nimbly woven throughout the book to provide subtle, effective unity to stories that display a great range in subject and content. The book closes brilliantly as Thomas revisits the child characters from the first story as adults who are still grappling with events set into motion when they were young.

In addition to the characters’ states of motion—from anger to forgiveness, or apathy to fear, or from love to indifference—not to be overlooked as some of the most fascinating elements in the work are the arresting and significant props: A Dragon weed flamethrower, a pair of orange Crocs, swan planters with broken beaks, a vial of cherry Jell-O, a bleached frog skeleton.

In States of Motion, Thomas delivers authentic settings in small towns struggling under the weight of economic hardship, intricate conflicts with no easy solutions, and characters who are reasonably angry, restless, irritated, confused, apathetic, or heartbroken. They are not always likable, but they are knowable, and the author consistently renders their struggles with accuracy and compassion.
Dorene O’Brien is a Detroit-based fiction writer who has won The Red Rock Review Mark Twain Award for Short Fiction, The Chicago Tribune Nelson Algren Award, and The New Millennium Fiction Award. She is the recipient of a creative writing fellowship from the National Endowment for the Arts and a residency from the Vermont Studio Center.