Survivor Café: The Legacy of Trauma and the Labyrinth of Memory, by Elizabeth Rosner. Counterpoint, 2017. $26, 237 pages. 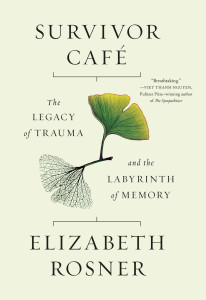 Every generation bears the suffering and guilt of the one before. Poet and novelist Elizabeth Rosner explores this theme from her perspective as the daughter of two Holocaust survivors: her father imprisoned at Buchenwald and released at sixteen along with his brother as the sole surviving members of their family; and, her mother quartered into a Polish ghetto and escaping with her family to the countryside where they would hide for the remainder of the war. Rosner introduces her story with what she calls the “Alphabet of Inadequate Language,” an alphabetical, acrostic-type poem in which all twenty-six letters, some repeated, begin a word associated with some sort of wide-scale tragedy in recent world history. Beginning with “A is for Auschwitz, where more than a million were gassed and then burned into ash. The word that could speak for everything that follows,” and cyclically concluding, “Z is for Zyklon B, the gas used to murder millions of men, women, and children in Auschwitz. Now go back to the beginning. See under: A.” Thus, the poem could be read in a continuous loop, echoing the ceaseless haunt of trauma Rosner’s entire work centers around. These words, disclaimed in the title as “inadequate,” fail—like all words Rosner ultimately concludes—to capture the breadth of suffering inflicted upon and harbored forever by their victims.

Rosner’s ambitious work seeks not only to reconcile with the trauma that shaped her parents and herself, but also to connect this trauma with survivors of other tragedies across history and the world. She further examines what it means to be a survivor tragically armed with only insufficient language to relate suffering. Rosner’s most compelling point is her description of trauma’s heritability. Her introduction states, “… my generation’s [offspring of Holocaust survivors] DNA carries the expression of our parents’ trauma, and the trauma of our grandparents’ too. Our own biochemistry and neurology have been affected by what they endured. Epigenetics researchers are looking at the ways that the experiences of starvation, grief, and shock pass forward into the future.” Trauma haunts not only its victims, but their offspring as well, reiterating the structure of Rosner’s introductory acrostic. But Rosner doesn’t end with the emotional inheritance of trauma. She moves to the victims of Hiroshima and Nagasaki bombings whose children developed different cancers. In her exploration of these victims, Rosner realizes the extensive heritability of trauma, both emotional and physical. And that’s just the first two chapters.

Rosner centers her examination around three trips to Hamburg, Germany—her father’s motherland—to revisit the Buchenwald concentration camp. Beginning with their most recent 2015 trip for the seventieth anniversary of Buchenwald’s liberation, Rosner illustrates a literal survivors’ café in the lobby of Hotel Elephant. Coincidentally, the hotel was Hitler’s favorite and the Buchenwald survivors gather there every anniversary to reclaim the infamous building for themselves. Rosner describes a scene in which her elderly father, with a renewed mastery of the German language, carries a tense conversation with a German woman who is the granddaughter of a Nazi officer; she is a therapist now counseling the fellow offspring of Nazis and Nazi sympathizers, but has yet to fully reconcile with guilt inherited from her forbearers. Rosner’s sense of inherited trauma parallels the the German woman’s guilt. The scene reiterates a vital theme of the book: inheriting trauma. As a kind of illustration, Rosner describes three major, yet seemingly random, ailments her father experiences on each of the three trips to Buchenwald—he faints as soon as he arrives in Weimar, later passes a kidney stone, and finally loses a tooth. Trauma manifests itself physically, refusing to ever fully part from its sufferers.

At times, Rosner’s ambitious work attempts to tackle too many tragedies at once. In her discussion of “dark tourism,” she moves from the Cambodian Killing Fields to the Rwandan genocide, in a chapter that also ruminates on the Holocaust survivors who returned to their homes only to find them “owned” by people who assumed all the Jews had been killed. This chapter also briefly mentions Japanese-American Joan Miura, whose family burned its belongings before being sent to an internment camp, and remarks it a method of “…claiming some measure of self-determination, of agency—by being able to set fire to one’s own life rather than watch someone else burn it or bury it or claim it.” Rosner moves from tragedy to tragedy in an almost stream-of-consciousness structure that, one might argue, often breezes by the significance of each individual atrocity.

But Rosner’s book is unique as it pushes to weave so many tragedies of recent history together in an exploration of grief, trauma, storytelling, and what it means to survive. The book’s main focus is the Holocaust, and other tragedies are only briefly examined. However, Rosner redeems herself in that every word is motivated by respect, empathy, and peace for the survivors she cares for so genuinely. Rosner humbles herself as the descendant of survivors still shouldering the burden of her beloved parents’ sorrow, and her work is an attempt to connect with others in her position and give them voice and comfort. She concedes words are doomed to inadequately testify to the extent of certain traumas, but promises that in most cases, words are all we have. Words—especially oral histories—are the tools with which survivors relate their past, and the only access we, as listeners, have to understand. Despite the inherent truth of the inadequacy of all language, Survivor Café compels its storyteller and reader, alike, to remember.

Augusta Elebash is a senior English major at Loyola University. She currently works as an editorial assistant for Object Lessons.